On Saturday, September 10, a near pandemonium broke out in a part of Awka Town following an attempt by an impostor to the kingship of Awka Town, Chief Austin Ndigwe, to perform the New Yam Festival as the traditional ruler of Awka. Police and soldiers cordoned off the venue of the event, with tear gas fired at guests who had already started attending the event.

Ndigwe had over the years been repeatedly parading himself as the monarch of Awka Community despite the Government of Anambra State recognizing Obi Gibson Nwosu as the rightful traditional ruler. Despite protestations by Igwe Gibson Nwosu to the past administration to stop Ndigwe from parading himself as the monarch, nothing was done to that effect, just as same protestations to the police went unheeded.

But on September 10, the Anambra State Government finally came out clearly to warn Ndigwe against parading himself as the monarch when the government had already recognized Igwe Gibson Nwosu as the traditional ruler of Awka.

In a press statement signed on behalf of the Anambra State Government by the state’s Information Commissioner, Sir Paul Nwosu, Gov Chukwuma Soludo threatened legal action against Ndigwe if he continued to parade himself as the monarch of Awka Town; just as he affirmed the state government’s recognition of Obi Gibson Nwosu as the bona fide traditional ruler of the town. 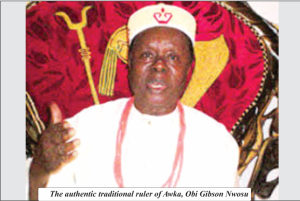 We applaud the Soludo Administration for coming out to denounce the provocative and unlawful activities of Ndigwe which the past administration failed to do, a development that emboldened Ndigwe to continue along the path of infamy.

We believe that in such matters government should act decisively to call any erring personality to order as there can never be two monarchs in a kingdom. We view the attempt to usurp the kingship of Awka Town as an act of rascality geared towards breaching the peace of not only the town but the state which has Awka as its capital.

We find it very disappointing also that some elders of the town were part of the infamy despite fully knowing the true situation of things. For whatever reason they did that, their action stands condemned as they have not shown any good example to their children. They have also made a mockery of the chieftaincy institution.

We are happy that so far the government of Prof Chukwuma Soludo has shown courage and political will in dealing with critical issues in the state. We hope that the government should also delve into other communities where such nonsense is happening.

Finally we commend His Royal Majesty, Igwe Gibson Nwosu, for his patience and the civilized way he had approached this vexatious matter. We do hope that with the state government finally making its position on this matter clear, sanity and order will return to Awka and the rightful monarch given his deserved respect. There should be a limit to rascality.