Emanuella made her foray into comedy at the age of five. She was on a family holiday and met with Angel. He needed some children for his comedy shoot, and called a few children he knew for the audition, but they could not memorize their lines and he then turned to Emanuella. Despite the eighteen-hour long video shoot, a stunt he pulled to test the endurance of the kids, Emanuella did well. After her selection, Angel had to convince her parents to let her become a part of the Mark Angel Comedy team and got their approval. She became well known after the comedy skit “This is Not My Real Face Oh”, in which she was making jokes about a headmistress to her fellow students without knowing the student was the child of the headmistress. This short skit was featured on CNN’s Facebook page. 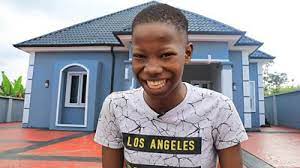 On 2 April 2020, during the COVID-19 lockdowns, Emanuella, Success, and Regina Daniels were featured in a skit by Ofego titled “Lockdown” on his YouTube channel using archive footage.

2018, Emanuella was invited to the National Assembly by Senate President Bukola Saraki on account of her landing a role in a Disney film. She made the announcement of her role in the Disney film on her Instagram handle.

In 2016, Emanuella won the award for Top Subscribed Creator from YouTube at the inaugural edition of the Sub-Saharan African YouTube Awards. She also won the Best New Comedienne & Princess of Comedy awards at the Afro-Australia Music & Movie Awards (AAMMA). She was hosted by CNN in November 2016. In 2015, she won the G-Influence Niger Delta Special Talent Award.

Emanuella is from Imo State in eastern Nigeria. She was born in Port Harcourt in Rivers State. There have been controversies on her relationship with Mark Angel, as it has been said in different circles that she is his niece, and some say they are cousins. Eze Chidinma of Buzz Nigeria in an article stated that Emmanuella is niece to Angel. Pulse Nigeria also stated that Angel is an uncle to Emmanuella. On the other hand, George Ibenegbu of Legit.ng stated that both are cousins. Rachael Odusanya in a later publication on legit.ng stated that they are not related.

Shot in Australia in 2018, the top comedienne appeared in the film as a guest star alongside its major cast including Hawa Barnes, Felino Dolloso, and Craig Bourke.

‘Survive Or Die’ focuses on the story of Shade, a 16-year-old refugee whose escapes from her war-torn African country lands her in a remote and uninhabited part of Australia.

She must reach civilization whilst fighting for her life in the harsh terrain and from a hunter on a quest for revenge over the death of his son.

Millions of people are displaced across the globe. Many are trapped in wastelands and dead lands; many more have drowned in the seas while fleeing conflict zones. Refugees are crossing borders making many governments nervous, unbalancing internal politics, and giving rise to nationalism, racism, and xenophobia. As the world becomes more dangerous doors are shut and walls come up. This movie is based on real-life stories and events.

Many of the scenes in this film are drawn from real-life experiences and events. In the 90s as a very young boy, by accident or chance, I found myself on a boat in West Africa. We sailed through the Atlantic Ocean for days an experience I can only describe as hell on water. I eventually got lost in the very heart of Africa and continued my journey through central and Southern Africa picking up languages, experiencing different cultures but above all picking up survival skills.

The cast of Emanuella in this film is not a mistake as she has brought in lots of views. Okoduwa said:

One million views in just a week! The inclusion of Emmanuella Samuel in this movie may be the driving force behind these high views in just a few days (based on the comments).