Insecurity: We Are Winning

Gradually, calm is returning to Anambra State after almost a year of excruciating turbulence marked by incessant killing of people in the state by hoodlums that gloried in the moniker: Unknown Gunmen. Although the killings were not restricted to just Anambra State, but the entire Southeast Region, it came to a stage when it seemed Anambra had solely been targeted by the hoodlums.

During this period, some local government secretariats were burnt and vehicles destroyed, just as many security personnel were killed. It soon snowballed into kidnapping and senseless killings. No one can easily forget the abduction, killing and beheading of a lawmaker in the state who hailed from Gov Chukwuma Soludo’s constituency.

It seemed to be the climax of the killings and this pushed the Anambra State Government to reel out a number of security measures aimed at turning the tide against the criminal elements.

Since then, barely two months ago, calm is beginning to return to the state. There has been a noticeable improvement in intelligence reports and cooperation between the public and the security agencies. Communities which had hitherto kept silent are now beginning to expose the hideouts of these criminal elements to law enforcement agencies, while youths in some communities are also coming out to confront them.

We commend those behind the recent positive turn around in fortunes as it concerns security in Anambra State. Any society where hoodlums dictate to law abiding citizens and attempt to form a parallel government will not survive. There simply cannot be two governments in one state. 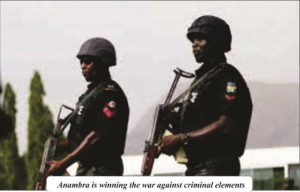 The government that is elected by the people and which is accountable to the people is what we want; not a situation where some brigands masquerading as freedom fighters usurp the role of government.

We have long maintained that agitation for any cause should not involve the taking of human life or unnecessary disruption of social and economic activities which the current brand of agitation has been causing. We have also always believed that there are much better and civilized ways of seeking redress in a democracy, rather than taking the law into one’s hands.

We commend the government of Prof Chukwuma Soludo for walking its talk on restoring sanity and calm to the state and urge it not to relent as the forces of darkness will always be looking to come back.

But while the siege on the hoodlums continue, we urge for caution so that the rights of people will not be trampled upon or abused. To this end, the security agencies are advised to employ the highest level of professionalism in dealing with the situation as we believe it will further help to strengthen the bond between the members of the public and the security agencies.

We would however have preferred a situation where the entire Southeast governors would come together to simultaneously fight the present scourge in the zone instead of the individual efforts we are presently seeing. A situation where hoodlums chased away from one state cross over to another and from there return to their former enclave when chased out again cannot provide a lasting solution.

In the interim, everybody is urged to be security conscious and report any suspicious situation to the police. The task of reclaiming Anambra State from hoodlums is for everybody. Let us sustain the recent gains in security.