Insecurity in Anambra: Enough is Enough!

That Anambra now ranks second to terror-torn Borno State is no longer news. From cult related killings to killings by the group referred to as unknown gunmen, Anambra is witnessing an all-time security crisis and it is not helped by the fact that the hoodlums seem to be having a field day.

Just last week, many people were shot dead at a burial ceremony in Ebenebe, Awka North Local Government Area of the state, by suspected cultists. It was gathered from the police that the man being buried was a notorious criminal who was among the terror group attacking police formations and killing security personnel. But it was reported that the community was shielding him, despite knowing his background.

The story also had it that after he was killed in December last year, his rival criminal gang warned the community against according him a proper burial which was shelved on two occasions. But on the third attempt to bury him, many who had come to that burial were gunned down by hoodlums in broad day light. 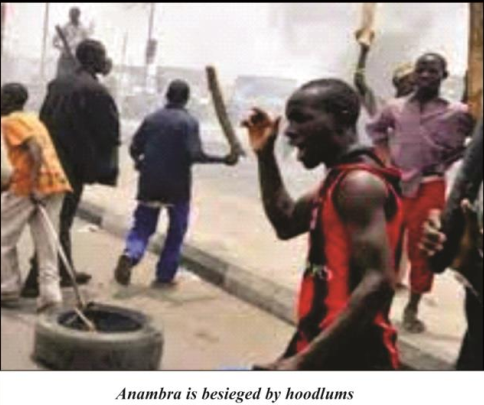 Just as the news was sinking in, a report filtered in about the killing of a man in his Lexus car in Isuofia, with some other people sustaining bullet wounds. The attacks came barely a week after a well-known business mogul, Chief Ofoma, was killed on his way to Port Harcourt.

Indeed, barely three days can pass without reports of killings across the state, especially in the Ihiala/Orsumoghu/Azia and Ekwulobia axes. Not long ago, a joint security team battled the hoodlums around the Orsumoghu axis and discovered five decomposing bodies of those believed to have been kidnapped. But nothing comes close to the discovery of a gang which were eating the flesh of those they captured.

All these horror stuff are now making Anambra and the entire South East not only inhabitable but the last place any investor would like to visit. This state of affairs has gone on for far too long that something drastic now needs to be done.

Being that these killings are happening either in the state’s borders with Imo State or along routes leading to those borders, it becomes imperative that the Anambra and Imo State Governments need to collaborate to launch a massive and sustained operation against these vermin in order to stamp out their menace once and for all.

Communities should also help by ridding themselves of these undesirable elements. If, for, instance, the Ebenebe Community had handed over to the police, the man because of whom he was the latest killings would not have happened, those who were killed at the burial would be alive today. But because some communities are still shielding criminal elements who have their bases in those communities, the fight against criminality is proving difficult.

The Anambra State Government is thus enjoined to declare a state of emergency on security in the state as a matter of urgency before anarchy overwhelms the state and its people. Anything short of this will not be acceptable. Enough is enough!