The Catholic Bishop of Awka Diocese, His Lordship Most Rev. Paulinus Ezeokafor, has decried the incessant waste of human lives and wanton killing of security agents in the Southeast.

Bishop Ezeokafor, who stated this at St. Patrick’s Catholic Cathedral, Awka, while delivering his 2021 Easter Message, described the killings as an unfortunate and worrisome situation, describing such as an invitation to anarchy

The revered cleric explained that Easter was the greatest celebration in Christendom, noting that God demonstrated his love for mankind by giving up his son for the salvation of the world. 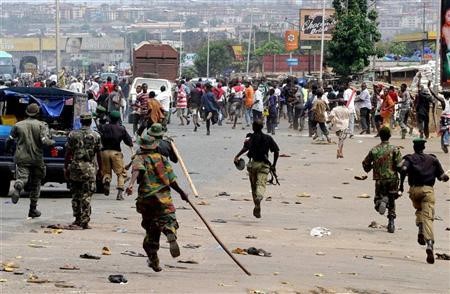 The charismatic and influential Bishop called on Nigerians to love one another much as Jesus did to humanity when he died on the cross.

He said too much emphasis on material wealth and worldly positions was responsible for the level of security challenges in Nigeria and said that men must relate well with one another to earn a place in eternity.

The Bishop said though COVID-19 ravaged the entire world, God had spared Nigerians and Africa out of love.

Calling on Nigerians to embrace COVID-19 vaccination, he however called on government to address the hesitancy among the people.

His words, ‘Humans, as images of God, have dual personality; the physical which is temporary, and the spiritual, which is eternal; and there is need for us take more care of ourselves.

‘As we celebrate, let us call to mind the situation in our country and make conscious efforts to make it better.

‘It is by the grace of God that we were not wiped out by COVID-19 because, considering the death toll in Europe and America, it was expected that when it came here, we would all be dead.

‘Thank God for sparing us. Now they are talking about vaccine. I encourage everyone to take the vaccine because they are good antidotes to health issues.

‘Government can help address vaccine hesitancy by being more sincere with the people so that they can be trusted the more,’ he said.

Bishop Ezeokafor decried security challenges and deaths in Nigeria which had made human life to lose the high value God placed on it and called for urgent decentralization of the police to enable states and regions to have greater influence on the protection of life and property of the people, arguing that the current structure had failed.

He condemned attacks on communities by suspected herdsmen and attacks on security agencies by unknown gunmen, saying it was time government intervened decisively.

‘Human life is being wasted in our country to the extent that they no longer mean anything. Life is the greatest gift God gave to man; that is why suicide is considered the greatest crime against God.

‘Farming is an occupation and nobody should allow cow rearing or another profession to destroy it. Chicken and grass cutters which are not aggressive are put in cages, cows which are aggressive should not be allowed to move freely,’ he said.