It was a kind of armageddon on the night of Thursday October 20 when a report came in about gunmen setting about 15 shops and vehicles ablaze in Amorka, a community along the Onitsha/Owerri Road, situated in Ihiala Local Government Area of Anambra State.

According to reports, at least 15 shops, several trucks and cars were burnt by yet-to-be identified gunmen.

Same reports said the gunmen, numbering over 10, shot all through the night, while shops in the area were looted in the confusion that ensued.

Amorka is a border town to Imo State which has since become the den of these criminals.

Fides learnt that the attack triggered panic and confusion as both residents and travelers scampered away in all directions as they sought to escape; just as a heavy traffic gridlock followed soon after, stretching from Amorka to nearby communities of Mgbidi and Awo Omama in Imo State.

It was reported that in the ensuing melee several shops were looted by the hoodlums. It was not readily ascertained who the culprits were although the popular opinion was that it was perpetrated by members of the proscribed Indigenous People of Biafra, IPOB, said to be protesting the non-release of their leader, Nnamdi Kanu, despite a court order. 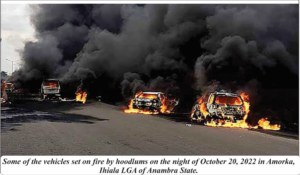 It was also reported that the hoodlums also dropped sheets of paper, bearing typed messages, threatening to ensure there would be no peace until Kanu was released.

Now, even as we consider the reason for the attack as puerile and self-destructive; being that it is the federal government that is holding Kanu and not any government in the Southeast, we are compelled to question the role of communities in this whole matter.

We are raising this poser in view of the fact that every crime is local. The people behind this and other atrocious acts are based in communities. They take off and return to their bases in those communities and as such cannot be said to be unknown.

The government of Anambra State has expended both human and material resources in trying to contain the security challenge in the state and is gradually succeeding. But such efforts will bear little fruit if all hands are not on deck to sustain the battle against hoodlums. That was why the state government came up with the slogan, ”See something, say something”.

But how well is this being adhered to? Are there communities still reluctant to match the efforts of the state government in restoring normalcy to the state? Are some communities taking actions that seemingly encourage these hoodlums?

As was seen in the attack in Amorka, silence will only embolden the hoodlums to do more damage and no one knows who will be the next victim or where they will strike next. This is why more is expected from communities if at all we want to see an end to this menace.

But while on this, we call on the governors of the Southeast to collaborate in flushing out these hoodlums as we have noticed that their activities now take place in border towns.

As the 2023 elections zero in, there is every need to quash this menace to allow people to exercise their franchise in peace; even as we urge those behind the criminality to see reason and refrain from attacking and killing their own people, or, indeed, anyone for that matter, as life is sacred. It makes no sense