The fight against insecurity has topped the activities of Prof. Chukwuma Soludo’s Government in his first 100 days in office as the helmsman of Anambra State, but the good thing is that he is winning the fight and Anambra is becoming safe again, writes Ikeugonna Eleke.

Insecurity didn’t just rear its ugly head upon the assumption of office by the former Governor of Central Bank of Nigeria, Prof. Chukwuma Soludo. In fact, it was inherited from the administration of his immediate predecessor, Chief Willie Obiano. Far before he was elected governor of the state on November 6, 2021, criminals of all sorts had been riding rough shod over the state, making some parts of it to be declared no-go areas. Even during the campaigns, candidates of various political parties were unable to visit some areas for fear of criminals. 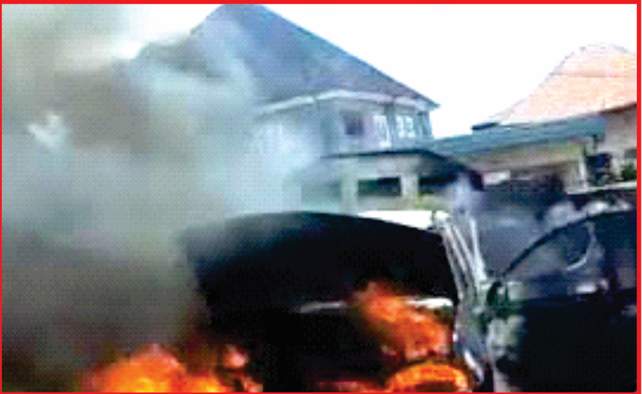 In most communities, especially in Anambra South Senatorial Zone, criminals collected dues or payment from locals as settlement to be allowed to hold any activity, including burials, weddings, house warming and others. To keep the road free for guests, celebrants were made to pay money, with a strict instruction not to let the orthodox security forces to attend.

In some of the communities, youths fled to avoid being conscripted into their gangs by the criminals, while the dare devil criminals set up camps in bushes where they always took kidnapped victims to, while they awaited payment of ransom for their release. They also set up shrines in such places where they fortified themselves for their operations. The host communities were not their only targets from such camps, as the criminals occasionally moved into busy towns like Nnewi, Ekwulobia, Ihiala and other urban places to strike and return in what looked like a guerilla warfare.

Upon his swearing in on 17 March 2022, Soludo extended a hand of fellowship to all Anambra people including criminal elements, granting them amnesty. He urged everyone living in the bushes to come out and warned that anyone carrying arms and living in any bush in Anambra would be deemed a criminal and dealt with. The grace period for the amnesty expired with criminal activities still high.

Fides recalls that in the very heat of the operations of criminal elements in the state, no day passed without stories of robberies, car snatching, kidnapping for ransom and, sometimes, outright killing of innocent people. The operations, though happening every day, were mostly carried out on Sundays and Mondays. This trend was interpreted by many as a way of forcing people to continually observe the already called off Monday sit-at-home exercise as previously declared by the Indigenous People of Biafra (IPOB).

To stem the tide of insecurity, Soludo went to work. He first got all the churches in the state to hold a one day prayer session aimed at cancelling the Monday sit-at-home, and later followed it up with a visit to the detained leader of IPOB, Nnamdi Kanu. But none of these steps proved to offer any solution to the insecurity in the state. The criminals rather intensified action to the point of resorting to beheading prominent people they kidnapped, even after most times collecting ransom to release them.

It was at this time that the beheading of the lawmaker representing Soludo in the state assembly, Hon Okey Okoye, and the killing of a pregnant woman and her three children happened. These may have been two incidences that angered everyone and set the tone for a quick reprisal from the government.

Despite having what is seen as a very beautiful plan for Anambra people, Soludo has used the last 100 days in fighting criminals and slowly, many people in the state are accepting that he is gradually winning the war.

In a state wide broadcast to commemorate his 100 days in office recently, it was not difficult to observe that so far, despite his planned programme for the state, Soludo has been more focused on ensuring that Anambra is safe. One of Prof. Soludo’s vows as a governor, which was prominent during his campaign, was to make Anambra a livable and prosperous homeland. This included ensuring a viable economy, and security. But before achieving them, Soludo seems to have put everything to a halt to first reclaim the state from criminals.

One can say that without making noise, Soludo is gradually reclaiming Anambra State from criminals. Joint security forces have in diverse operations in the state routed criminal elements, most killed and many others arrested alive. In one of the operations which was witnessed by Fides, a criminal hideout was stormed by the joint security team after a Catholic priest and three other persons who had been kidnapped and kept in wait to receive ransom on them had been rescued.  The operation which was held at Oba also witnessed the demolition of a three-room bungalow which served as hideout. This, Soludo later explained, was in line with the policy of the state government to either take ownership of any land used by criminals, or demolish buildings used by them.

As normalcy gradually returns to the state, the Anambra State Police Command has also expressed happiness about the response of members of communities in giving out information. The state Commissioner of Police, CP Echeng Echeng, had during a press briefing, cried out in frustration, saying that there seemed to be a conspiracy of silence among some members of the public who preferred to shield the criminals by refusing to give out information.

But in a later press conference, Echeng showered praises for Anambra people, saying that the call for people to volunteer credible information to help in fighting the criminals had been realized. He also recounted several successes registered by the force in the fight against criminals, saying that such successes were majorly based on tip offs by people in communities.

He said, ‘We do not need to know your name, we do not also need to know you. All we want is for people to call us and tell us about the activities of criminals around their areas and we will work with the information.’

Already, there are testimonies of the return of normalcy in the state. For three weeks now, the usual Monday sit-at-home exercise seems to have been defeated, as economic activities now go on in most towns. Also, very few incidences of crime have been witnessed in Anambra State in the last two weeks, especially those by the set of criminals branded unknown gunmen.

Also, appraising the security situation in the state, the Anambra State Commissioner for Homeland Affairs, Chief Chikodi Anarah, said the state government had won the fight against gunmen and criminals troubling the peace of the state. He vowed that government would not relent until lasting peace and orderliness were finally restored in the eight flashpoints in the state, comprising Ihiala, Ekwusigo, Nnewi South and Nnewi North. Others are Ogbaru, Aguata, Orumba North and Orumba South.

He said, ‘Our vigilance group is positioned in all parts of the state and are working day and night under the oversight of the security agencies to ensure that Anambra regains its status as the safest state in Nigeria in no distant future.’

During the reign of criminals, countless people, including youths of many communities, had been killed by criminals in the guise of unknown gunmen. Many prominent people were also killed, one of whom was Dr Chike Akuyili (husband of the late Prof Dora Akunyili); kidnapping and beheading of the serving member of the Anambra State House of Assembly, representing Aguata 2 State Constituency, Hon. Okechukwu Okoye, among others. Security personnel, especially police officials on duty, and vigilante operatives, were also killed and their weapons carted away.

Countless government property, including EEDC offices, INEC offices, courts, local government secretariats and police stations, were attacked and burnt down. But the good news is that gradually, normalcy is returning to Anambra State, with Soludo assuring the people that he would not relent.

And as normalcy gradually returns, expectations are that soon, the governor will find time to face other areas of development he promised the people.