Lawyers in Anambra State last Monday embarked on a protest march to the Anambra State Government House, calling on the state governor, Chief Willie Obiano, to quickly move to stem the tide of insecurity in the state.

The NBA in the state had the previous week lost one of its chairmen and President General of Omor Community in Ayamelum Local Government Area, Bar Frank Onwuachi, to kidnappers.

The lawyers who had announced earlier that they would boycott the courts for three days, starting from last Monday, marched through the streets of Awka to the Anambra State Government House, where they presented a charge to the state governor. 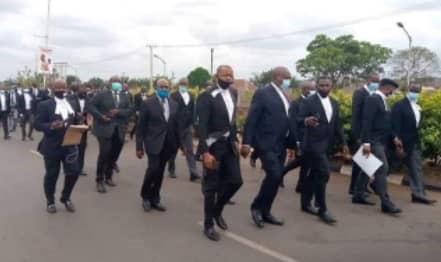 A cross-section of protesting lawyers as they marched through the streets of Awka, March 22, 2021.

The chairman of Onitsha branch of NBA, Mr Onyechi Ononye, who spoke on behalf of the protesting lawyers, said lawyers in the state could no longer go to court due to the high rate of security challenges in the state.

‘We are here to express our displeasure over the worsening security situation in the state.

‘Our member was kidnapped and killed the other day. Some security formations were attacked and operatives were killed while their weapons were carted away.

‘We cannot travel to court because of the challenging security situation which is getting worse every day. We are here to tell the governor about the security situation in the state. All the chairmen and secretaries of the NBA branches in Ananmbra are here,’ he said.

Responding on behalf of the state governor, the Secretary to the State Government, Prof Solo Chukwulobelu, expressed sadness at what he described as the alarming rate of killings in the state, but disclosed that government had put in place measures to stem insecurity in the state.

‘Security is every one’s business. You in the NBA, the various communities in the state, let us join hands together and fight insecurity. Security is not just the government’s business alone; everybody must do something to ensure the good security network in the state is improved,’ he said.

He also said that a joint security task force had been constituted, and had moved into action to ensure that such acts did not recure.

A visit to some courts in the state capital, Awka showed deserted court premises.