Indiscriminate Erection of Road Bumps: Government Should Walk its Talk

In the last months of its regime, the Government of Chief Willie Obiano frowned on what it described as the indiscriminate erection of road bumps across the state by communities and directed their removal. But today, months into the life of a new regime, that directive has been ignored by communities and, instead, more bumps are being erected.

Apart from these unauthorized bumps being capable of spoiling roads built with hard earned money, they are known to increase the commission of crime. This is because armed robbers, kidnappers and gunmen often target such places to attack their victims who are forced to slow down.

Again, these indiscriminately erected bumps are often done so close together that travelling across the state these days has become a nightmare. It makes some people to wonder whether those behind their erection are not doing so to punish road users. 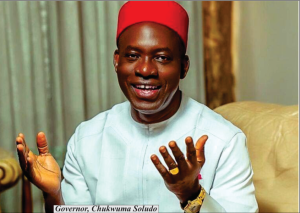 As government is a continuum, we request that the Government of Prof Chukwuma Soludo should look into this matter and ensure that illegal road bumps are completely removed wherever they are.

People should stop being laws unto themselves. A situation where people wake up and decide to construct road bumps is not acceptable. Often times no warning signs are placed for road users to know that there are bumps, even when they are erected after sharp bends. This has caused many accidents and will continue to do so.

As we pointed out in an earlier editorial on this menace, one could pass a road in the morning without seeing bumps only to return in the night and suddenly see them. The implication is usually dire.

Even though bumps should be erected in strategic places like schools, markets and busy areas, they should be approved by the government so that they will be done correctly.

There should be sanity in every action undertaken to avoid chaos. Government should also ensure that its directives are always enforced, lest it becomes the norm for the citizenry to ignore such directives.

To this end, we request the Anambra State Government to, as soon as possible, begin the removal of all illegal road bumps and to warn the various communities through their leaders to desist from repeating such in the future.

As far as we know, there is still a government in place in Anambra State and the citizenry should always recognize and respect that.