India’s Vice President on Monday denounced hate speech against other religions, saying it creates divisions in society. He stressed that every person has the right to practice his or her faith in the country.

“Practice your religion but don’t abuse and indulge in hate speech and writings,” Vice President M. Venkaiah Naidu said at an event organized in Mannanam, Kerala state, to mark the 150th death anniversary of Saint Kuriakose Elias Chavara, a spiritual, educational, social, and cultural reformer hailing from the Catholic community of the southern Indian state. 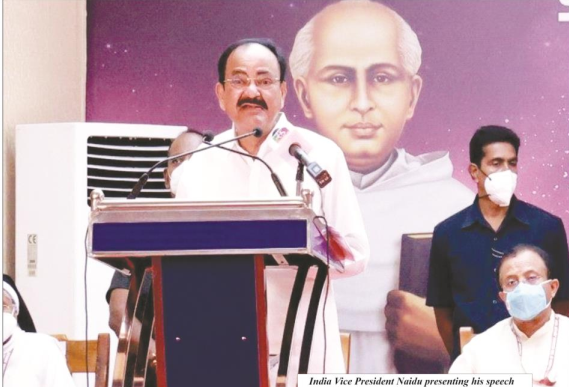 The 19th-century priest of India-based Syro-Malabar rite Catholic Church was beatified by Pope John Paul II on 8 February 1986 and declared a saint by Pope Francis on 23 November 2014. His liturgical feast falls on 3 January, the day he died in 1871.

The 72-year-old Vice President, who hails from Andhra Pradesh state, noted that hate speech and writing are against the culture, heritage, traditions, constitutional rights, and ethos of the nation. Pointing out that secularism is in the blood of every Indian, he said the country is respected in the world for its culture and heritage.

Educating youth to care for others Calling for strengthening the Indian value system, Naidu urged that community service be made compulsory for students in government as well as private schools, saying it would help them to develop an attitude of sharing and caring in their interaction with others.

He suggested that schools “make community service of at least two to three weeks compulsory for students”.

Narayana and Chavara as models

The Indian Vice President held out Kerala’s visionary spiritual leaders, like legendary social reformer Sree Narayana Guru and St. Chavara, as models in various fields, and urged other states to take a cue from Kerala in the fields of education, social justice, and women’s empowerment.

“Their pathbreaking work,” the Vice President said, “proves that every state can be transformed into an engine of growth and progress and that this can be achieved through the social and educational empowerment of women and youth belonging to poorer sections of society.”

On inclusivity and common good

the Indian Vice President noted that even though the identity and vision of St. Chavara were shaped and formed by his Catholic faith, his social and educational services were not restricted to the progress and development of that community alone.

“St. Chavara combined the spirit of the renaissance with the mission of charity and noble Christian concept of universal brotherhood,” the Vice President said, expressing appreciation for the congregations and movements he started in the educational and health sectors. 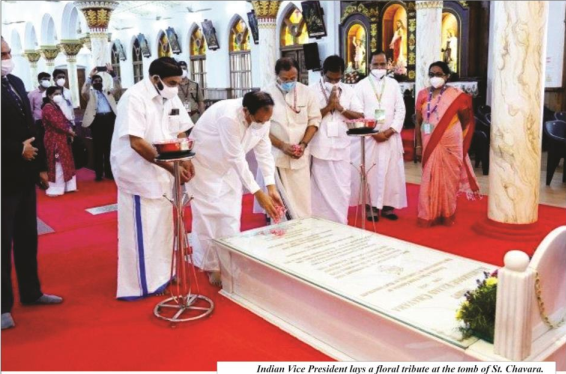 A firm believer in inclusivity, St. Chavara started a Sanskrit school in 1846 with access to candidates of all castes, genders, and religions. Another such initiative was the setting up of a school alongside every parish church to educate children from all communities. These schools that provided free mid-day meals, encouraged parents to enrol their children, which helped raise the literacy rate in the state.

“This iconic spiritual and social leader of Kerala, whom people considered as a saint during his lifetime, was a true visionary in every sense of the term,” Naidu said.

St. Chavara engaged himself as a spiritual, educational, social, and cultural reformer of Kerala society in the 19th century and contributed richly to the social reawakening of the people.

While contributing greatly to communal harmony and tolerance in society, Naidu said, St. Chavara always showed a deep concern for the wellbeing of all and taught us that peaceful human relationships are sacred and more important than anything else.

“Today, we need a Chavara in every community—a towering individual with a vision to unite all sections of society socially and culturally, and take the country forward,” Naidu stressed.