One of the problems our society faces today in different churches is the rate at which young girls dress indecently during weddings in not just the Catholic Church but in other denominations as well.

A number of times, many priests are forced to speak up, condemning the indecent dressing of these young girls right inside the church.

Sadly, even the brides most times wear wedding gowns that are too revealing and boldly indecent to the church. It is an anomaly that has truly come to stay but which needs to be eradicated completely. 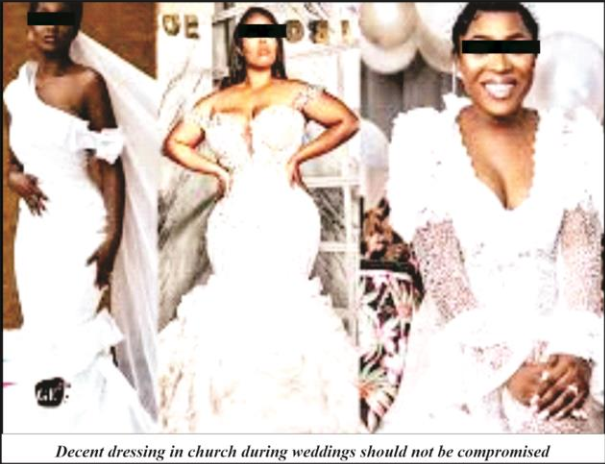 In the past, the Christian Association of Nigeria (CAN), had called on churches to introduce tough measures against such indecent dressing. While the Church is expected to fight this menace, it is also important for parents to sit up and teach their children the culture of dressing decently.

Recall that part of the reasons why the rate of sexual abuse is on the increase in society today is because of the manner of dressing of some of these young girls which actually invite negative attention to them with dire consequences.

Indecent dressing is not acceptable in the Church, especially these days when it looks like a sort of competition between young girls and even married women to dress indecently in public places.

He died in pain so that we would feel no more pain in life. He was stripped of all dignity so that we shall have dignity. His clothes were torn while he was beaten up so that our nakedness will be covered. It therefore makes no sense when people walk into the house of God of all places and look like they’re going to the night club.

Modernization is also a reason why most young girls dress indecently to church. They need to understand that the so-called fashion they see in movies is not meant for the house of God.

Churches should introduce stringent measures that will take care of this anomaly. Families also have a very big role to play, especially mothers, so that when they begin to acquaint themselves with the culture of decent dressing early in life, no matter how much pressure society puts on them, they will not give in to such indecency.