For the first time since the Indigenous People of Biafra issued a weekly sit-at-home order to residents of the South-East in solidarity with the organisation’s detained leader, Nnamdi Kanu, commercial activities and vehicular movement continued unabated on Monday as residents of Imo State ignored the order and went about their daily business.

In Owerri, the State Capital, and its environs, Markets, Filling Stations, Shops, Fast Food centres and relaxation centres opened for business while mobile food vendors and hawkers of consumable items moved about without fear of molestation.

Our reporter who monitored the situation, reported that similar scenarios played out in Orlu, Okigwe, Oguta, Mbano and Mbaise axis.

At the popular Afor Ogbe Abattoir, a butcher who simply gave his name as Nnamdi expressed delight at the non-interruption of activities in the market by the IPOB members and their sponsors and advised the people to always restrain from acts capable of provoking arises in the State. 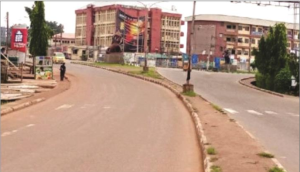 The situation was however different in Anambra State where activities were again grounded in major cities on Monday.

Residents have continued to observe the sit-at-home despite assurances by the State Commissioner of Police, Mr. Echeng Echeng.

A businessman in Onitsha, who identified himself as Mr. Onyema Ezenwa, lamented the sit-at-home in an interview with our correspondent , saying, “The negative effect of this two-day Monday and Tuesday sit-at-home serves the people of the South-East right because we are the architects of our own problem.

“Our politicians who are representing us in the three tiers of government are selfish; always interested in what will benefit them so let them give that money that goes to their pocket to unknown gunmen who enforce a nonexistent sit-at-home.”