The representatives of the Ime Obi Idemili North/South have paid a courtesy visit to the President of Ohaneze Ndi Igbo, Anambra State Chapter, Chief Emeka Udodeme at the State Secretariat of the Apex Igbo Socio-Cultural Organization. 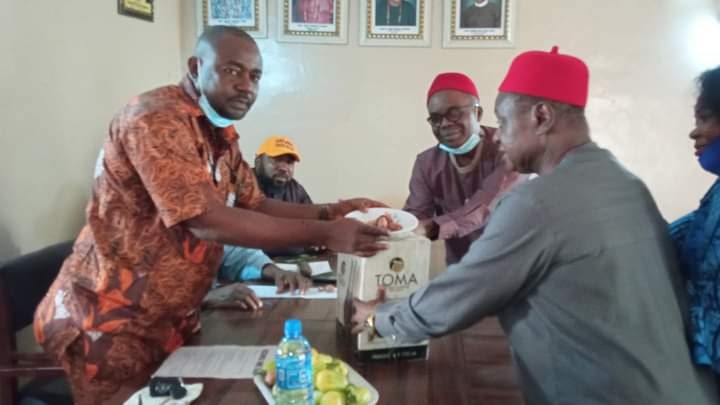 Prince Emeka Udodeme receiving the members of Ime Obi Idemili who called on him in his office at Awka.

He stated he (Udodeme) had distinguished himself creditably in all the positions he had held in the past, saying that the Ohaneze Ndi Igbo, Anambra State boss was a known promoter of Igbo cause and agenda, adding that he was a bona fide member of the Ime Obi Idemili North/South.

Chief Ekwuno, while congratulating Udodeme as the newly elected Ohaneze Ndi Igbo, Anambra State Chapter President, informed him of the forthcoming Nzuko Ime Obi Idemili North/South Cultural Day billed to hold on the 5th of April, 2021; even as he pleaded with him to assist them in mobilizing dignitaries for the event.

In their separate speeches, the Secretary of the Organization, Sir Emma Okafor, and the administrative secretary, Mr. Luke Onyekaonwu, thanked the group for coming to see them, calling on them to propagate the ideals of the organization and also to ensure that they partnered with the Ohaneze leadership in their locality.

Responding, the Ohaneze Anambra State President, Chief Udodeme, expressed happiness over the visit, noting that he was not surprised seeing his brothers and sisters coming to identify with him; while he emphasized that Ime Obi Idemili Organization would continue to grow from strength to strength. He assured that he would do anything within his reach to promote the association.

Prince Udodeme said his recent election as the Anambra State President of Ohaneze Ndigbo was a divine call in the service of Ndi Igbo and pledged his commitment to faithfully serve his people.

The President expressed his willingness to partner with Nzuko Ime-Obi Idemili Association in any area where the association could positively impact on the Organisation. He assured that Ime Obi Idemili members would be fully involved in this year’s Ohaneze Ndi Igbo, Anambra State cultural fiesta.