I’m Still Focused on Achieving My Vision for Unizik, Esimone at NUJ Congress

The Vice Chancellor of Nnamdi Azikiwe University, UNIZIK, Prof Charles Esimone, says barely three years after assuming office as the 6th substantive Vice- Chancellor of the institution, he is still focused on achieving his vision for the university.

Speaking at the March 2022 State Congress of the Nigeria Union of Journalists (NUJ), Anambra State Council led by Comrade Dr Odogwu Emeka Odogwu in Awka, March 3, Prof. Esimone recalled his vision to make UNIZIK the best University in Nigeria, among the ten best universities in Africa and among the best two hundred universities in the world.

He further explained that to achieve this, he articulated a five-pronged strategy predicated on the drive for academic excellence, productive public/community service, administrative reforms, discipline, and advancements, together with its antecedent vision, called Project 200.

He noted that to navigate through financial insufficiency that bedeviled public universities, his administration leveraged partnership with the private sector and other stakeholders to advance the Project 200.

While noting that their efforts had been successful, he said they had strengthened the institutional capacity of the university for research and effective teaching-learning process through the adoption of a multidisciplinary approach to research and the teaching-learning process, setting up of a grants and patents office to train staff and students on research grant sourcing and patent processing, encouraging staff and students to publish in selected high impact journals in various disciplines, with the University completely or partially assuming responsibility for the publication charges. 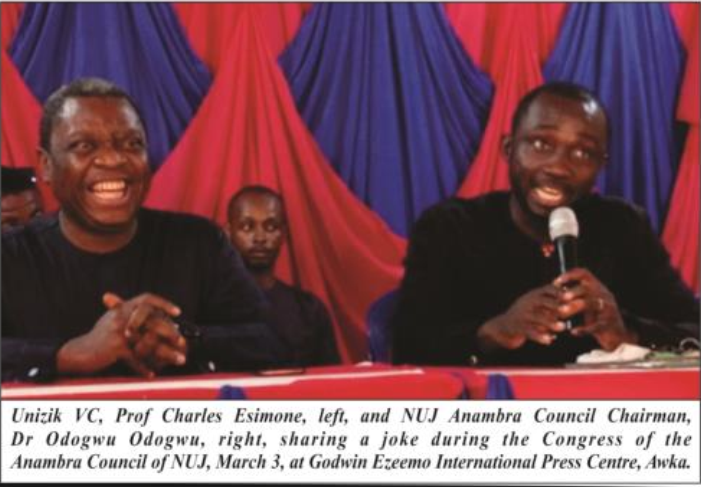 These, Prof. Esimone revealed, had yielded many commendable results, which include the University being among the 12 universities; two from each of the 6 geopolitical zones of the country, selected and

classified as centres of excellence for TETFund research grants in select areas for each University – a grant that subsists for 5 years during which the University was to receive a total sum of one billion Naira; approval of the University’s College of Health Sciences as one of the 6 simulation research and training centres set up by TETFund, with facilities for the testing and diagnosis of COVID-19, Lassa fever and other viral diseases; as well as the University receiving the approval of a research grant of the sum of N14,937,000.00 from TETFund under its COVID-19 special intervention research grant scheme.

According to him, an increasing number of staff of the University had been publishing in high impact journals and receiving recognition. For instance, he noted, while Scopus, the largest source-neutral abstract and citation database for peer-reviewed literature in the world, listed eight staff members of the University among the top five hundred authors in Nigeria.

The UNIZIK VC listed other achievements the University had so far recorded under his watch, ranging from infrastructural projects to academic facilities, publications, awarded grants, approval secured, projects attracted, and many more.

He congratulated the new leadership of NUJ in Anambra State led by Comrade Odogwu, and hailed the state’s journalists for the cordial relationship existing between them and the institution.

‘I look forward to a continuation of this healthy relationship with your new State Council,’ he said.

Earlier in his remarks, the newly elected Chairman of NUJ in Anambra State, Dr. Odogwu Emeka Odogwu, appreciated the VC for what he termed his magnanimous support and partnership with the Union; even as he restated the Union’s resolve to continue partnering with the University, publicising her activities and playing roles as watchdogs in society.