I’m on a Mission to Rescue Anambra, Uplift Wellbeing of Igbos – Val Ozigbo

A frontline Anambra State Governorship Aspirant under the platform of People’s Democratic Party (PDP), Mr Valentine Ozigbo, has said that his mission is to make Anambra State better, rescue the state, uplift the wellbeing of the Igbos and change the bad name which has been associated with politics. 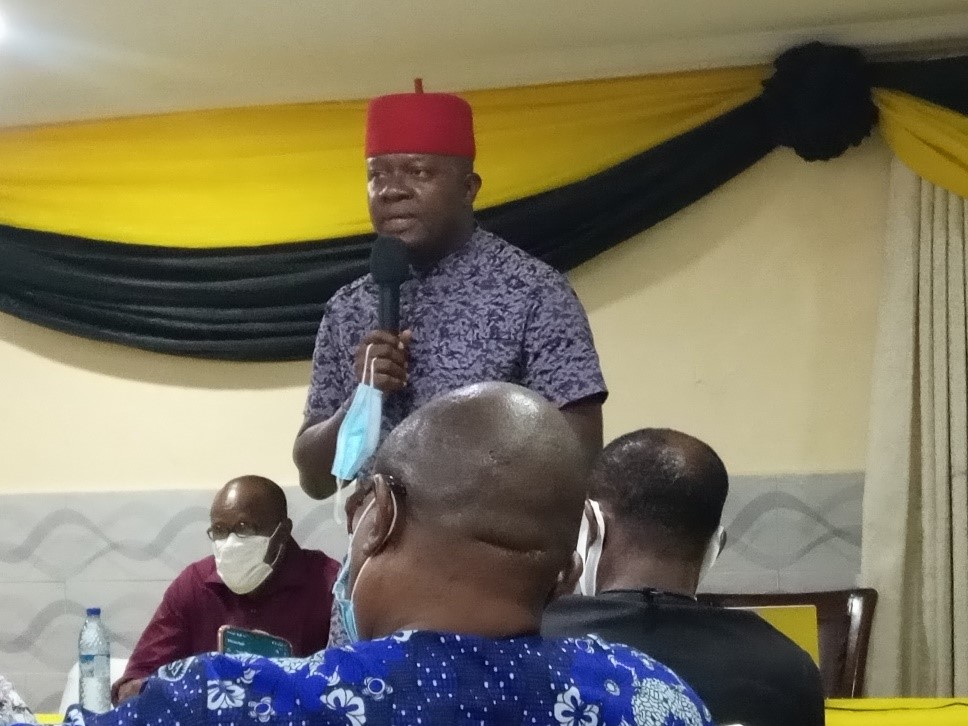 Mr Ozigbo, who stated this at a parley he had with media practitioners at La-Luna Hotels, Awka, Anambra State, last Tuesday, said he was in the gubernatorial race, because of the need to change the status quo and the need for things to be done right. He noted that Anambra State needed a competent, visionary and transformational leader who understood development and who could bring advancement to bear on the state in order to enable her to catch up with the rest of the world.

The former Transcorp President and Group Chief Executive Officer, announced that he would soon unveil his manifesto, which, according to him, would focus on agriculture, industrialization, education, among others, and make Anambra State light she ought to be.

Citing the current state of roads in Anambra State, which, he said, were in a mess; the lamentations of some people who had resigned from the current government over poor governance; and the debt profile of the state, Ozigbo, observed that any mistake of enthroning what he termed incompetency in the next election would be a recipe for disaster.

According to him, Anambra State Government had not been prudent enough in spending, and had been operating in a fragile economy. He stressed the need to cut the cost of governance, strengthen resilience and boost development in Anambra State and in Nigeria at large.

Ozigbo, who recalled that the former Anambra State Governor, Mr Peter Obi, left the state in what he termed positive trajectory, decried what he described as the alarming Anambra State debt profile, according to statistics from the Debt Management Office (DMO).

He thanked God for what he described as the emotional intelligence he had which helped him in spotting inert potentials in people, and urged all to support him in his mission to rescue Anambra State.

The former Transcorp boss, who was said to have served also in agriculture, gas and oil sector, said he was prepared to serve, ready to learn and more than happy to partner with the media. He stated his desire to be the fruit of answered prayers for good leadership which the masses had yearned for, as according to him, he had the capacity for good leadership.

Ozigbo appreciated the media practitioners for what they had been to him, acknowledging that he had enjoyed what he described as a fantastic relationship with the media for the past one year.

When asked what his greatest anticipation ahead of the primary election was, Mr Ozigbo said he was excited that PDP, which according to him, had a competent leadership, would conduct the best and most credible primary election.

He noted that competency, capacity, mastering the naivety, navigating, the ability to mobilize the people and the resources, were his strong points, adding that he had the sympathy of the voters and was confident of victory.

Ozigbo, who also echoed the need for a Nigerian president under PDP, said the APC Government had not lived up to expectations.

He urged the media practitioners to support credible process in line with Section 22 of the Nigerian Constitution.

Among others that accompanied Ozigbo to the event were a former member that represented Aguata Federal Constituency, Rt Hon Eucharia Azodo and a former Chairman, PDP, Anambra State, Mr Ejike Oguebego.

In his vote of thanks, the chairman of the Nigeria Union of Journalists, NUJ, Anambra State Council, Comrade Emma Ifesinachi, thanked Ozigbo for deeming it fit to rub minds with the Fourth Estate of the Realm.