A House of Assembly aspirant on the platform of the People’s Democratic Party, PDP, for Anaocha State Constituency 2, Comrade Kingsley Osita Ozalagba, said his aspiration is to utilise what he described as the inherent benefits in the state House of Assembly. 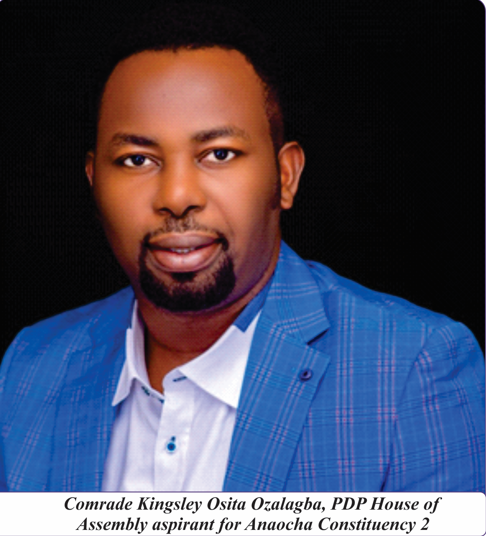 ‘Primarily, the basic duties of a house of assembly member is to make good laws for the people, and, I ask you, how many of us know what is happening at the state house of assembly? They keep on making laws without domesticating such laws, such that the constituents are kept in the dark of such laws,’ Ozalagba explained.

He said a house of assembly member was the representative of the people who should be the eyes, ear and mouth piece of the people, which, he said, was lacking in Anaocha 2.

‘Town Hall meetings will be a must as we need to feel the pulse of the People who trusted us with their Votes. A house member has the basic responsibility of checkmating the executive arm of government by engaging in constructive oversight functions to make sure that my dear constituents are not shortchanged,’ Ozalagba further explained.

He expressed gratitude to God for enabling him to have served as a pioneer President General of Anambra State Association of Town Unions Youth Wing, an umbrella body of the 179 towns and communities that make up Anambra State.

‘It is on record that I have bequeathed assets running into millions and it is on record too that I have worked in the Anambra State House of Assembly as a civil servant (legislative officer) and I understand the workings of the house, as I have taught elected house members in the house how to move motions and make laws; so I won’t be learning anything as I know how they work,’ he said.

Ozalagba who presently is the chairman of his Village, Ajani, said it was also on record that he had turned the village to a semi-urban community and still advancing the cause of the village, having facilitated the installation of street lights, modern kitchen, 120 capacity pavilion, grading of roads, setting up of a computer centre, with teaching facilities.

He also said he was behind the procurment of a social mobility shuttle to cushion emergency situations, especially at night, without budgetary allocations.

‘I have the strong conviction that my emergence as a House of Assembly member, representing the good people of Anaocha Constituency 2 will be an eye opener and a watershed in the politics of Anaocha, as I will not limit myself to what has always been, but will think out of the box in driving a creative kind of representation never seen before.

‘I am competent, capable and confident of my resolve in making Anaocha Constituency 2 a place of pride. I pray and hope that my party (PDP) delegates find it worthy, activating the beautiful possibilities that abound by voting me as the party’s standard bearer and see God In action,’ Ozalagba prayed.