I’m a Refugee in My Community, Ex-Commissioner Cries Out

A former Commissioner for Trade and Commerce in Gov Willie Obiano Administration, Dr Christian Madubuko, has lamented his fate of becoming a refugee in his own land. Madubuko who stated this in his country home in Anaku, Ayamelum LGA of Anambra State, Thursday, while addressing newsmen in his home which was destroyed during the attack by Omor Community on Anaku on May 16 this year, described the attack and destruction of property as inhuman, barbaric and senseless.

‘The first day I came here and saw the level of destruction I couldn’t believe it. Are the people that did this animals? It’s unfortunate. Since this happened, I’ve been speechless. You can see the amount of destruction. The worst thing is that I have become a refugee in my own land as I have no place to stay,’ Madubuko said. 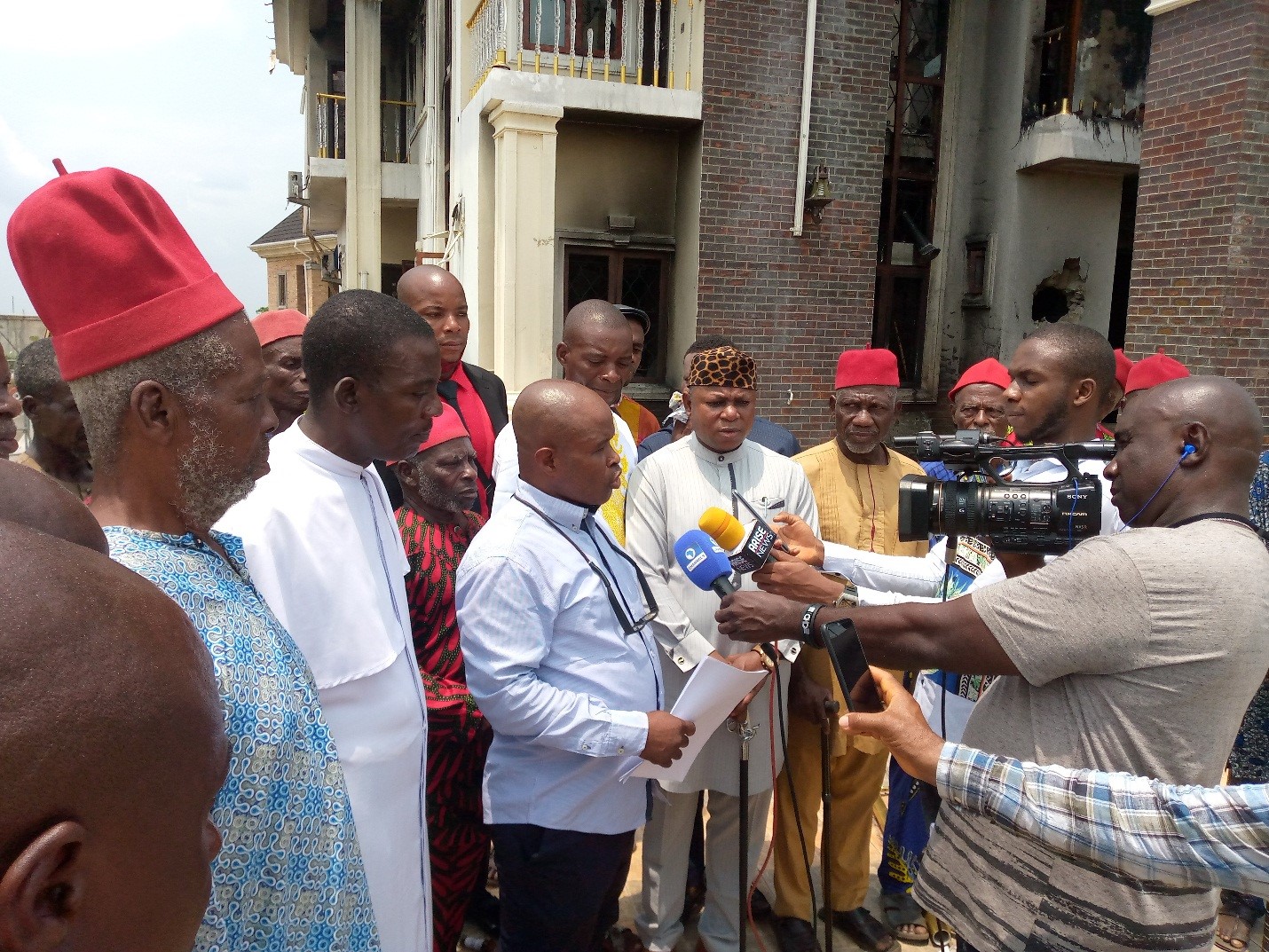 It will be recalled that in the early hours of Sunday, May 16, while some Anaku people were either still sleeping or were in church, their community had come under attack by Omor people over a land dispute. Two policemen were reportedly killed, as well as two civilians; just as many homes were destroyed.

Among some notable people who were affected were the traditional ruler whose palace and four vehicles parked in the compound were destroyed and burnt, as well as the home of the former commissioner.

Addressing newsmen in a statement titled, “Correcting the deceivers”, John Onuzulike Udemezue, a spokesman of Anaku Community, regretted that no arrests had been made by the police, even though Anau Community gave the police a list of some of the perpetrators of the mayhem. He said the failure of the police to effect arrests had become suspicious and called on the police to redeem itself by arresting those behind the attack.

He recalled a previous attack by Amikwe-Omor people when they invaded a piece of land he claimed belonged to Obukwu Kindred, Anaku in May 2020, but that the matter was timely managed by Ayamelum Local Government Area which settled it with the active participation of the traditional rulers of the two communities.

He alleged that an agreement was signed that everybody should maintain peace and status-quo, but Omor people started building houses on the disputed area of land belonging to Anaku so that before the constituted boundary adjustment committee visited the area, they would claim ownership of the place.

Udemezue also recalled some of the attacks unleashed by Omor people on indigenes of Anaku which were reported to the government and did not receive judgment at the Otuocha High Court, and accused the people of Omor of having a track record of violent tendencies, brutality, vain arrogance, greed, disrespect for the law and  constituted authorities.

Udemezue described as dangerous, malicious and false, the claim by Amikwe-Omor that they jointly owned a piece of land with Obukwu-Anaku and Umuerike-Umerum.

Following several other antecedents which Udemezue provided, they pleaded to the government to consider some previous maps and land surveys established by both the colonial and federal governments of Nigeria, which, he noted, served different political, administrative and demographic purposes.

He however noted that of all the maps, only three clearly delineated inter-communal boundaries of Ayamelum towns in ways that may still be relevant today.

The maps, according to him, included the Administrative Map of Southern Nigeria (1905) created by the British Colonial Government, which specifically included Ayamelum Clan; the Topographical Map of Onitsha Province (1925) by Rev. G. T. Basden also of colonial government, besides waterside Umuerum (Ezu River), where the rest of Ayamelum was cut off.

While disclosing that each of the communities from which lands were expropriated received compensations for damages from the Federal Government, he called on the government to use the topographical information to intervene and ensure the restoration of peace and justice, as well as boundaries between Omor and the neighbouring communities.

When Fides contacted the Commissioner of Police, Anambra Police Command, Mr Chris Owalabi, for his reaction on the failure of the police to effect any arrests, he said though the matter had been taken over by Force Headquarters, Abuja, he was aware that some important people from both communities had been invited to the state Police Command, followed by some arrests.

He wondered why some people could stay in the village and accuse the police of not making arrests as if they would know when arrests were made.

He said however that investigations were still ongoing on the matter.