The silver jubilee kicked off with a free medical treatment sponsored by Rev. Sr. Dr. Chika Joycelyn Ezeugo and a Football soccer played between St. Dominic’s parish and St. Patrick’s Parish on 24th August, 2019. At the end of the match, St. Patrick’s defeated St. Dominic’s with 4-3.

The homilist at the concelebrated Silver Jubilee Celebration Thanksgiving Mass, Rev. Fr. Cajetan Obiekezie, said that most Christians had forgotten the purpose of their creation. He lamented how Christians abuse the mercy and grace of God upon their lives. He added that obedience to the Lord brings about upliftment and blessings. Illustrating with the life of Zacchaeus, Peter and Prophet Isaiah, he encouraged Christians to embrace the mercy of God in their lives. He condemned social status & class in the church, calling it an age of backwardness. Fr Obiekezie observed that many Catholics make mockery of their faith and so encouraged them to work hard to attain eternity.

Rev. Fr Obiekezie added that priests of God should be respected because they represent the truth of life, apex of civilization and symbol of holiness. He noted that every name a person bears has a significant impact on his or her life. He thanked the celebrant, Fr Ezeatu for the legacy he laid since his ordination, and encouraged him to continue to live in the beauty of his name.

Because of his cheerful nature, he is sometimes called a comedian with a mean face. He was a jumper, good volleyballer & Javelin thrower. He was really good in sports and also a renowned artist. Fr. Ezeatu was ordained on August 20th, 1994 by the Late Archbishop Albert Obiefuna. He has served in so many parishes in Nigeria and got his PhD in Philosophy of Religion & Education from Fordham University, Bronx, New York. Presently, he works as the Chaplain of Trinity Health System, New Jersey, USA.

In his vote of thanks, Fr. Ezeatu appreciated his family, friends and well-wishers who have stood thick and thin with him during his life journey even before and after his ordination. He thanked his parents, Mr Alfred & Mrs Augustina Ezeatu, who showed him the catholic faith and ensured he entered the seminary.

Fr Ezeatu thanked the bishops he has worked with, Bishop Simon Okafor, Archbishop Albert Obiefuna and Bishop Albert Fashina, the Emeritus Bishop of Ijebu Ode. He also thanked those who sponsored him in the seminary and eulogised his Godfather, Late Samuel Muojeke, whom he took as his father.

The Jubilarian thanked all his teachers who taught him in school and in the seminary, especially Mrs. Onyekwelu. Fr Ezeatu thanked his family member, Hon Joe Ezeatu and other relatives for their unique support. In a special way, Fr Ezeatu appreciated the family of Peter Obiano of Obeledu for their hospitality. He equally thanked all his friends who came from far to celebrate with him. 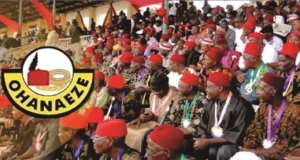 We Don’t Need it – Ohanaeze Warns Tinubu Amid Endorsement 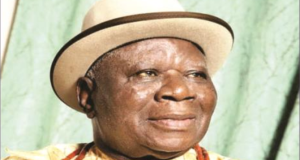 Without Zoning, There May Be No Nigeria After 2023, Says Clark