Former Central Bank of Nigeria, CBN, Governor, Professor Chukwuma Soludo, says his experiences growing up in a poor home have strengthened his resolve to provide equal education opportunities for all as governor of Anambra State, as well as create an axis of prosperity in the Southeast.

Soludo who stated this at a maiden media parley with select journalists at his campaign office in Awka, February26, said there was need to go change things for the better in Anambra State. 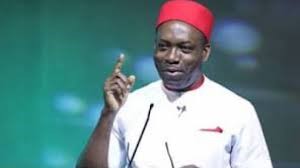 Recalling his experiences while growing up, Soludo said, ‘I grew up a poor village boy. As a boy, I was going from my village in Isuofia to Nanka and Agulezechukwu to fetch water with a mud pot. I was fetching firewood and unlike these days of matches and lighter, I would watch out for smoke from nearby families and went there to fetch fire for cooking. One also fetched food for the goats and my mother, who was a petty trader, would discipline us if we failed to accomplish our task on a daily basis.

‘At Nigercem, Nkalagu where my father worked as a driver, we lived in the Over Rail area which was the poorest area in Nigercem meant for very junior workers.

‘In Nigercem, there are Groups 1, 2, 3, and 4, and then across the rail where we lived. We were fetching water at St. Charles which happened to be my primary school because there was no pipe borne water at Over Rail. That’s the beginning of my life.

‘But from there, God blessed me such that after every examination, I would still come first in my class, which included the children of the elite, and would stand on the table to receive my prizes.’

He said one good thing Nigeria used her oil money to achieve was to give both the rich and the poor access to quality education, which, he regretted, was no more, assuring that one of his cardinal policies as a governor would be to give equal opportunities to the children of the rich and poor.

Soludo also said his quest to be governor was not for personal reasons as God had already blessed him.

He said his mission was that having finished with the world, done his bit in Nigeria, which also rewarded him with the national honour of Commander of the Federal Republic, CFR, there was need to serve his home state.

‘We have a whole lot of things we are doing in the private sector, but public service remains the greatest philanthropy, because with one public policy, you can change the fortunes of millions of people,’ he noted, while hoping that God would use him as a vehicle to change society.

‘My desire is to create an axis of prosperity around here to serve as a fall back for our people. We should develop our place so that children born in the next 30 years will have a viable place to live in. That is what is driving me to govern Anambra State. It is not about Soludo. As it is happening in Anambra, it should be happening simultaneously in other parts of the South East states,’ he said.

Soludo is vying on the platform of the All Progressives Grand Alliance, APGA.