Former Governor of Central Bank of Nigeria, Prof Chukwuma Soludo, was at 9.49am on Thursday sworn in as the sixth governor of Anambra State, with the new governor vowing to fight insecurity ravaging the state with dialogue, reports Ikeugonna Eleke.

Soludo was sworn in by the Chief Judge of the state, Justice Onochie Anyachebelu, at Government House, Awka, in a low profile ceremony.

The professor of Econometrics had opted for a low profile function for his swearing in, while also rejecting plans by his predecessor to hold the event at the very spacious newly completed International Convention Centre, Awka. But the event was nearly marred by a fight which broke out between Mrs Ebele Obiano, wife of the outgone governor, and Mrs Bianca Ojukwu, wife of former Biafra leader, Chukwuemeka Odumegwu Ojukwu, who is the totem of the ruling party in the state, All Progressives Grand Alliance, APGA.

Presenting his inaugural address after his swearing in, Soludo said, ‘My heart bleeds to see and hear about our youth dying in senseless circumstances. Every criminal gang-kidnappers, wicked murderers, arsonists, rapists, thieves – all now claim to be freedom fighters. Criminality cannot be sugar-coated. This must stop. 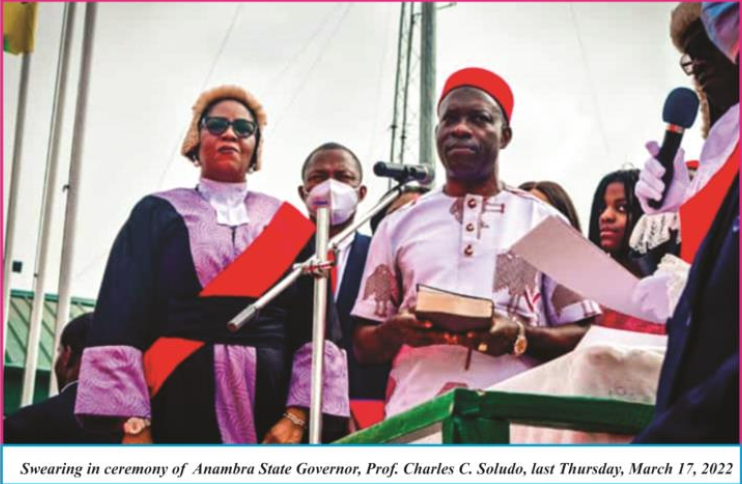 ‘All the stakeholders must now review both the narrative and the action plan. For starters, I endorse the recent statement (March 7, 2022) by the Joint Body of South East Council of Traditional Rulers and Bishops/Archbishops on Peace and Conflict Resolution, requesting for a tripartite discussion between them, the Presidency and South East governors, to deal with the conflicts in the South East, especially in relation to Nnamdi Kanu, the Indigenous People of Biafra (IPOB) and the Eastern Security Network (ESN).

‘There is no conflict that dialogue, in good faith, cannot resolve. Our government is determined to urgently restore peace and security in Anambra, and we will seek the active cooperation and collaboration of all stakeholders.’

Soludo told IPOB/ESN, the Movement for the Actualization of Sovereign State of Biafra (MASSOB), and other armed groups, that it was time to interrogate both the purpose and means of their campaign; even as he also warned politicians playing politics with the insecurity that they were riding a tiger.

‘The current trajectory is a road to desolation. Let us get around the table and talk. Let the elite in the closet come out, and let’s debate our future and forge a consensus. The conspiracy of silence by the elite and some community leaders must end.

‘If you see something, say or do something! Securing Igbo Land and Nigeria must be our collective responsibility. Let those in the forests come out, surrender their guns and let’s work together to rehabilitate and empower you to contribute positively to the peace and prosperity of our homeland,’ Soludo said.

On why his inauguration was a low key event, Soludo said, ‘Today is my first day at work. I just reported for duty and will work for at least eight hours. We had more than a month since the election to celebrate our historic victory. Now is the time to work, and there is no minute or kobo to waste in fanfare.

‘In a few minutes, I will announce some of the principal officers of the administration and commence with serious meetings of the Anambra State Security Council, followed by a meeting with the permanent secretaries, a meeting on Okpoko, and with my Strategy, Execution and Evaluation (SEE) Team.

‘Within the next one week, the list of commissioners will be laid before the House of Assembly. Tomorrow, we will head to Okpoko in Ogbaru Local Government Area and parts of Onitsha and Idemili, as we signpost our commitment to Fundamental Urban Regeneration, beginning with the greater Onitsha Metropolis.

‘I insisted that this event must not cost the government of Anambra one kobo. I would rather use such resources to lay the foundation stone for a public hospital at Okpoko or elsewhere or empower our security agents to fight criminality.

‘Yes, there will be a time to celebrate. We will celebrate when security of life and property is guaranteed and law and order restored; every child of schooling age is in school; every school child is receiving the 21st century education for the digital age,’ Soludo said.

Meanwhile, wife of the outgone Governor of Anambra State, Mrs Ebelechukwu Obiano, nearly marred the august occasion when she engaged in a fight with Ambassador Bianca Ojukwu, wife of the late Dim Chukwuemeka Odumegwu Ojukwu, the eternal leader of the All Progressives Grand Alliance, APGA.

Mrs Obiano, who seemed to have come, set for a fight, had approached Mrs Ojukwu in the front row of the event where she was seated close to out-gone governor, Chief Willie Obiano, demanding to know why she had come to an APGA function after attacking the party during the November guber election.

Mrs Obiano had reportedly rained invective on Mrs Ojukwu, causing the latter to smack her on her cheek, while she (Mrs Obiano) held and drew Mrs Ojukwu’s hair, before security operatives separated both women.

Earlier, Fides witnessed the arrival of Mrs Obiano as she was stopped at the gate when her convoy attempted to use the main gate.

She had come late for the event while her husband had arrived much earlier and had already inspected the guard of honour and the swearing in ritual for the new governor.

A barricade at the expressway leading into the government house was locked with keys, while Mrs Obiano was advised by security men to drive down to a far-away junction and turn into a smaller gate leading to the Government House.

Mrs Obiano who was late for the function, refused. She later trekked from the express to the main gate where she also caused a stir, before the gate was opened for her, while she trekked into the Government House where the function held, abandoning her convoy.

Mrs Obiano and her husband however, left the ceremony immediately after Prof Chukwuma Soludo, the new governor, was sworn in.

Soludo, in a press release by his media aide, Mr Joe Anatune, said the fight was caused by a breach of protocol.

Soludo said, ‘Prof Soludo hereby apologizes to all Anambra People, friends and guests who attended his inauguration this morning as the Anambra State Governor for the breach of protocol.

‘The breach was caused by improper communication which itself arose from a personal issue between the two parties involved in the breach.

‘Steps are being taken to resolve the misunderstanding and restore the parties to their previous relationship. Anambra State has over the years been known for a huge stock of social harmony and the stock will increase substantially in the years ahead as part of the concerted effort to accelerate the state’s development.’