Alhaji Ahmed Wada Ikaka, Pioneer Director, NYSC, South East Area Office, has encouraged NYSC staff in the Area office to rally round the incoming Director and give optimum support to her to achieve the mandate of the scheme in the South East.

Alhaji Ikaka urged them to work in unity to sustain the growth and development of the Scheme by giving full support to the new Director as they gave to him during his tenure. He recollected his efforts at establishing the office and pinpointed progress made that laid a solid foundation for the office to stand on good footing which include the securing of the office complex, acquisition of furniture and also acquiring a duplex for the residence of the Director. 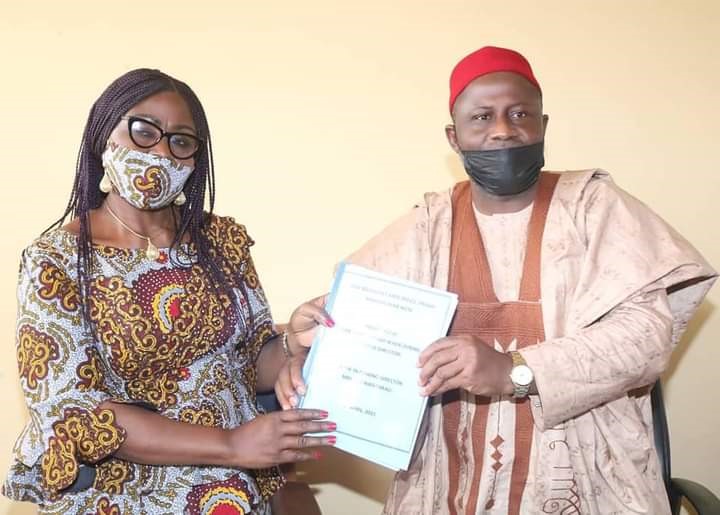 He noted that he would not have achieved much without the support of his hard-working staff. Alhaji Ikaka praised the State Coordinators NYSC Enugu and Imo states for donating furnitures to the office. He enjoined the oncoming Director to follow up on some of the promises made by various state governments in the region which are yet to be fulfilled, like the provision of utility vehicles for the office.

In a remark, Mrs  Ngozi D. Nwatarali, incoming Director, expressed her happiness over the warm reception by the outgoing Director and staff of the Area office and called for a double portion of the cooperation given to her predecessor.

Mrs Nwatarali urged the staff to be committed to their duties and always feel free to point out areas of development and growth, to record greater achievements in states in the area.

Speaking on the Occasion, Mr. Sam Ujogu, Enugu state coordinator, who spoke on behalf of the staff both Area office and Enugu state Secretariat, stated the readiness of staff to cooperate with the new Director and pledged absolute support and cooperation with the Area office.

The event ended with presentation of gifts to the outgone Director, and was graced by staff of the South East Area Office and members of management staff from the Enugu state NYSC secretariat.