The honour, which OANW said it was in recognition of Igwe Robert Eze’s wealth of experience, as well as his contributions to human and community development, was conferred on him on the occasion of his 84th birthday celebration at the Palace of Eze Ukpo last Tuesday, June 8. 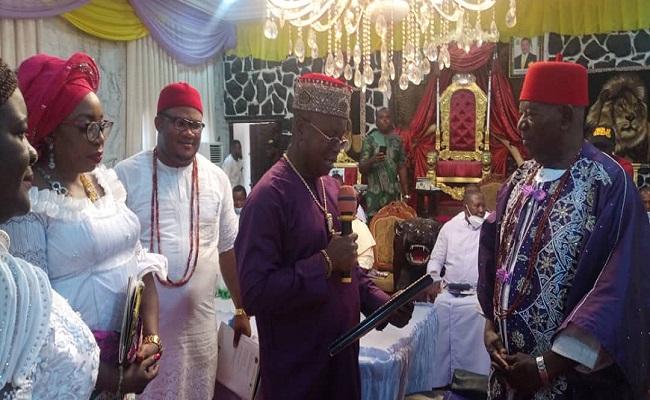 The Acting Vice, OANW, Hon Uche Amunike, who led the delegation in her address, noted that the honour was a unanimous decision of the World Governing Council, the World Advisory Council and the National Executive Council of Okpotokpo Adaigbo Niile Worldwide.

Hon Amunike also represented the Founder and President of the organisation, Iyom Chinelo Cynthia Nwokolo, Adaejiejemba I of Ukpo.

The Anambra State Grand Patron of OANW, HRM Igwe Dr Benneth Izuchukwu Emeka, Okebo II of Umueri, who presented the award plaque to Igwe Dr Eze on behalf of the organisation, congratulated Okofia VI on his installation, describing it as a call for added responsibility.

According to the information made available to the public, Igwe Dr Robert Chukwudilim Nweke Eze, will clock 30 years on the Ukpo Throne by December, 2021. The Ukpo Throne, which is the second oldest throne in Old Awka District after Nri, is currently 229 years old.

Okofia VI was said to be an accurate historian, a resolute administrator, a lover of education and a lover of hard work, who had a good sense of ecumenism.

Fides gathered that Okpotokpo Adaigbo Niile Worldwide, a humanitarian and socio-cultural organisation  has women who were indigenes of the five Igbo States (Abia, Anambra, Ebonyi, Enugu and Imo) and four Igbo speaking states (Delta, Rivers, Benue and Kogi), as members. The mission statement of the organization is to become the voice of all Igbo women worldwide, fostering unity, independence and progress.

Among others that graced the 84th Birthday celebration were the Catholic Bishop of Awka Diocese, Most Rev Paulinus Ezeokafor, who led in the opening prayer for the reception, and the Archbishop Ecclesiastical Province of the Niger and Bishop, Diocese of Awka, Most Rev Alexander Ibezim, who led in the Holy Communion Service for the celebration.