The Ofala, which took place on January 2nd 2022, is the highpoint of a period of seclusion rooted in deep spirituality.

The Ofala is primarily a celebration by the Monarch and his subjects to mark God’s faithfulness on the kingdom of Ochuche-Umuodu and the monarch’s emergence from seclusion, during which he is said to have successfully negotiated the fortunes of the Umuodu kingdom for the preceding year.

The festival which is his first since his coronation in 2019, witnessed large turnout of people from all across Ogbaru and beyond. The Monarch was applauded for his sense of communial-unity and for engendering peace in his kingdom.

The Igwe used the opportunity to call on the federal government to lower the tension across the country by conveying a national dialogue to address and reassure all the federating units so as to pull the country back from the brinks. 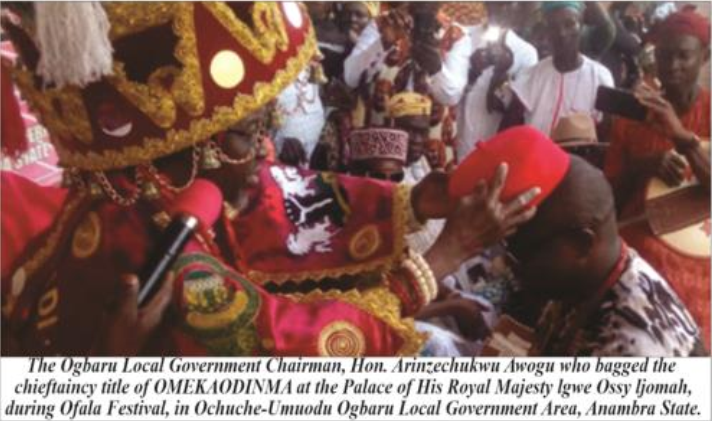 He also called on both the State and federal governments to remember that Ogbaru still exists, and in dire need of infrastructure particularly roads and healthcare.

He prayed for the peace and development of Nigeria, Anambra State, Ogbaru Local Government Area and the kingdom of Ochuche-Umuodu.

He appreciated the Governor of Anambra State, Dr. Willie Obiano for his kind-heartedness towards the people of the State and for touching so many lives positively in the last 8 years.

The monarch prayed God to make the Governor-elect, Prof. Chukwuma Soludo perform beyond expectations and advised him to shun praise-singers and those who will not tell him the honest truth about the feelings of the people.

He also urged Prof. Soludo to inspect project sites unannounced to have a true situation report as Ogbaru has been a victim of make-believe; where equipments are pulled out almost immediately after inspection without the knowledge of the inspector.

The high point of the event was the royal dance by the traditional ruler accompanied by traditional title holders in the community and the conferment of chieftaincy titles on some distinguished personalities among whom was the Council Chairman of Ogbaru Local Government Area, Hon. Arinzechukwu Awogu, who bagged the chieftaincy title of OMEKAODINMA (one who strives to better the people).