The cabinet members who were adorned in their white regalia, red caps  and beeds as the identity of cabinet chiefs in Igbo land and custodians of culture pledged their loyalty to the traditional ruler and obedience to the Community. 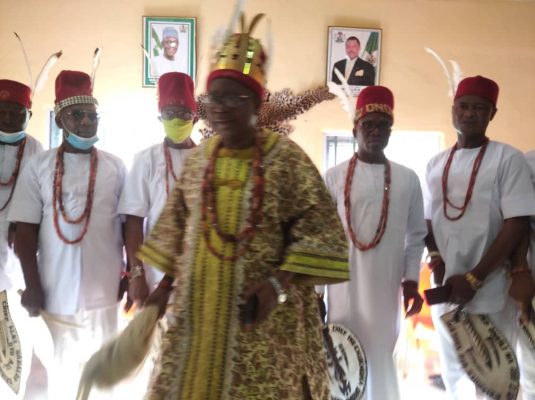 Addressing the members, Igwe Nwofia said that they were entrusted with the responsibility of ensuring that peace, tranquility, progress and development in the Community.

Igwe Nwofia noted that they are men of wisdom who will help him to pilot the affairs of the Community, advising them to work as expected and live according to their code of conduct even as he applauded Governor Willie Obiano for his massive road infrastructure in the area pledging their total support to him.

The Traditional Prime Minister of Eziagulu-Otu, Aguleri, Chief IKC Chukwuma who expressed gladness for the elevation and honour done him said  that since their Community is a remote area being devastated by flood every year, he will see to the progress and development of the Community and prayed God to help him to continue to toe the right part.

The President General of the Community, Chief Ikechukwu Onuora and another cabinet member, Chief Edwin Agbata said with Igwe Nwofia, the Community has come to lime light because he is using his wealth of experience and wisdom to pilot the affairs of the Community.

The event climaxed with induction and presentation as well as cultural displays by the people of the community.