There is no better way anyone could celebrate Christmas and inherit the blessings that come with Christ’ nativity, than sharing love with one another especially the downtrodden this season.

The wife of the traditional ruler of Atani, HRH Enyi Oduah Nwanyi Adaeze Ngoddy stated this at her country home, Central School Field on the occasion of this year’s annual Children Christmas party, being organised every 23rd December and being the 7th Edition in its series.

To that effect, children of Atani Community and beyond hold the day special as the number of attendees kept increasing. 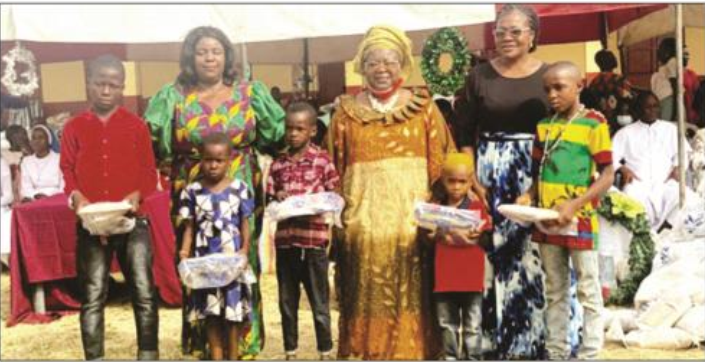 The party usually features, dancing competitions to which gifts are shared among the winners; Santa Claus’ entertainment of Children, cutting of Christmas cake, refreshments and sharing of gifts to all the children.

The 2021 Children’s Christmas Party had in attendance, over two thousand children from Atani and the surrounding Communities.

Oduah Nwanyi Ngoddy in an interview with newsmen said that the party was one of their ways of representing the true meaning of Christmas which is to share love with one another especially with the downtrodden.

Interacting with the children, she described them as an immense source of joy, a rare gift from God and blessings to marriages and the larger society.

Igwe’s wife said that the occasion means a lot to her, noting though there is Children’s Day to celebrate all children across the globe, Christmas is always the most unique period for them.

She harped on the need for all especially Ndi Anambra to embrace peace and build a more progressive society through demonstration of love.

The Monarch Wife noted that the birth of Jesus Christ, which is arguably the most significant event in the World presents the people with an opportunity to reflect and rededicate themselves to the service to humanity in line with the ideals and teachings of Jesus Christ.

On his part, the traditional ruler of Atani, Igwe Augustine Azuka Ngoddy noted that the event avails the children the opportunity to reunite.

According to him, coming together under such gathering will help them understand the importance of unity and love as they grow up.

The Monarch commended his Wife for giving the children what he described as the best Christmas gift and called on other affluent Ndi Anambra to emulate such gesture.

Igwe Ngoddy advised the children not to deviate from the teachings of Christ as it will help them live a purposeful life.

The children danced around with the Igwe’s Wife, while the unique arrival of Santa Claus otherwise known as ‘Father Christmas’ and his performance and sharing of gifts climaxed the event.