Speaking during the visit, the Monarch said that Governor Willie Obiano is finishing strong, and added that expectations are justifiably high on the incoming administration of Professor Chukwuma Soludo.

During the visit, he was taken round prototype buildings, central park, water treatment plant, nursery and other sections of the city by the Project Manager, Engr. Obinna Nnoruo, alongside other members of staff. 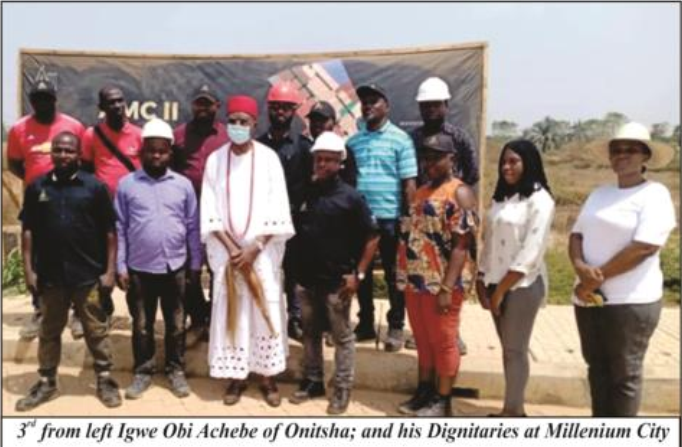 Speaking to our correspondent after touring the site, the Obi of Onitsha, who is also the Chairman of Advisory Board for the project, expressed delight over what he called 21st century project being expertly executed by locals.

Igwe Achebe noted that Anambra never had it this good until democratic governments came on board, calling on Ndi Anambra and residents of the State to extend their support to the incoming Soludo Adminstration to enable him sustain the tempo of development.

While commending Ndi Anambra for heeding the “aku luo uno” call, the Monarch said it is high time Ndi Igbo brought home their investments for rapid development of Igbo land.

In his remark, the Project Manager, Engr. Nnoruo, who expressed happiness with Igwe Achebe’s regular visits to the project site, assured that the sponsor, MP Infrastructure, will ensure that the city is liveable from next year, urging intending developers to come forth as some people have started constructing in the city.