The Obi of Onitsha, Igwe Alfred Nnaemeka Achebe has decried the poor sanitary condition of Onitsha Metropolis, in Anambra State, describing it as a source of worry over the years.

The Onitsha Monarch who made the commendation while flagging-off the monthly sanitation exercise in Onitsha explained that given its location as the gateway to the South-Eastern region of the country, Onitsha deserves all the attention from the government to live up to expectations.

Igwe Achebe, represented by the Ajie of Onitsha, Chief Sam Chukwudebe, however commended the Governor Chukwuma Soludo-led administration for its move to enhance environmental health in the area.

“I thank the Governor for this noble idea. We appreciate the efforts you are making here. Onitsha harbours one of the biggest markets in Africa and therefore, there’s every reason to keep the city clean.

“Very soon, Onitsha will be a tourist destination for most people coming to this area,” the traditional ruler stated.

He extolled the commitment so far demonstrated by the board and management of the State Waste Management Authority, ASWAMA towards achieving the vision of the Governor.

The government delegation, led by the Commissioner for Environment, Mr Felix Odimegwu, after the flag-off, visited some locations within the commercial city including Main Market and Oguta Road, where the contractor was battling to cart away a mountainous refuse dump. 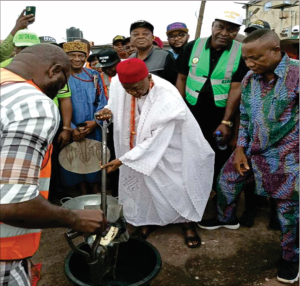 The Commissioner Speaking with newsmen, charged the people to take ownership of the monthly sanitation and other efforts being made by the government through ASWAMA to achieve a clean Anambra State.

The Chairman of ASWAMA Board, Dr. Emma Ezenwaji, appealed to residents of the city to prepare for the 30th September, 2022 when street dumping of refuse will be finally outlawed across the State.

“I was just discussing with the Commissioner and he was expressing surprise that the mountains of refuse are disappearing. If Onitsha can begin to wear a clean look, other Communities will surely follow suit.

“We have directed the contractors to go from house to house to collect  waste. We hope that by September 30, we will not see any dump site on our streets and roads”.

The Managing Director of the agency, Mr Mike Ozoemena, was happy with the seriousness Obi of Onitsha attached to environmental health, and promised strict enforcement of all enabling environmental laws.

According to him, the task to keep the State clean is collective, noting that the symbolic flag-off for the month of September will be done in Nnewi.

“Agbogidi, we appreciate the honour to have you flag it off today. The simple message is that this State must go back to what it used to be. A State of law and order. Where things work the way they are supposed to be. We are not dirty people. We are not joking anymore. Our people must learn to obey the law.”

The Transition Committee Chairman of Onitsha North Local Government Area, Mr. Onochie Ozoma, pledged commitment of the Local Government to the vision of the Governor of a clean, green livable and prosperous homeland.

“We have accepted the message from the seat of government in Awka. Onitsha is a meeting point for people from all parts of Onitsha. We have accepted the mandate that everywhere must be clean. We want to assure you that we will give it out best efforts to achieve the lofty goal”.