In their bid to promote and sustain Igboukwu culture, especially the Igbu Ichi tradition, the ancient town of Igboukwu, in Aguata Local Government Area of Anambra State, has organized a centenary birthday celebration of a cultural vestige in honour of Nze George Umeokonkwo Umennadi (Onye isi Nze Igboukwu) who is the sole surviving man with the Ichi marks in Igboukwu Land. 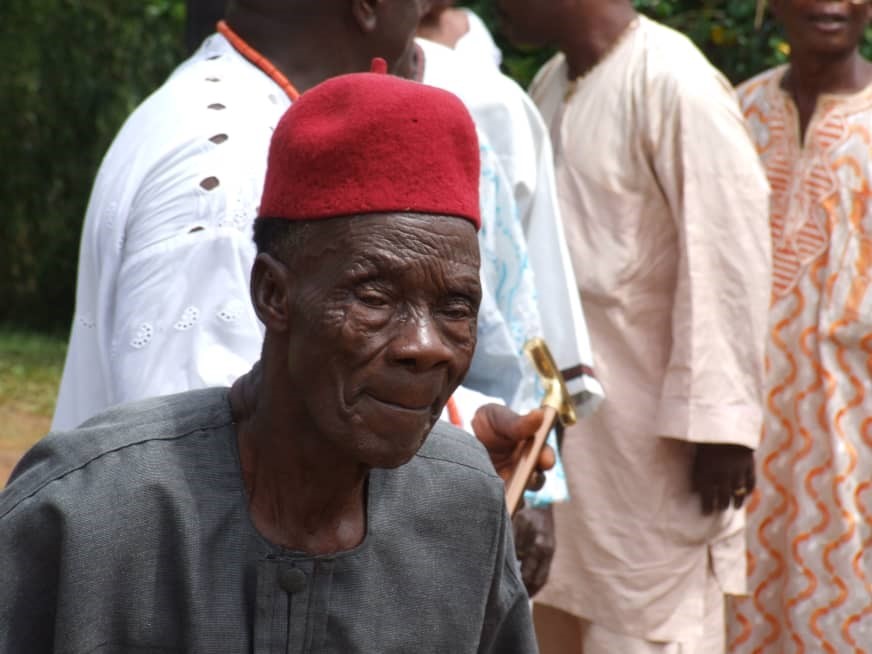 In his lecture, Professor Njoku who described Ndigbo as frontrunners, harped on the need for thorough research on Igbo history and traditions, saying there was need for the establishment of an Igbo Study and History Centre, where, he said, budding researchers would be groomed for adequate research and publications.

The University don commended the organizers of the event for thinking home and for making efforts to bring to the fore, the cultural heritage of Igboukwu people, as well as presenting to the world, the age-long artifacts and relics found in Igboukwu. He charged the organizers to use various organs of communication and information dissemination platforms to tell their stories.

He described Nze Umennadi as an object of the special celebration as the community focused on igbu ichi amongst other cultural practices that had been associated with the historical community for more than a thousand years.

‘The celebration is unique and symbolic because the celebrant was initiated into the Nze n’Ozo Institution, over 90 years ago, He recently clocked 100 years in a country where life expectancy hovers around 55 years.

‘He is also the only person with ichi Mark in Igbo-Ukwu and arguably the last surviving person with it in the whole of South East. Our town is celebrating that aspect of our culture which he represents. Our people had their way of life before the white men came in and changed a lot of this.

‘If you look at some of the archeological artifacts that were excavated in Igboukwu, you will notice the ichi marks, which were a sign of nobility in those days which shows that Igbu ichi is culture that has being with our people until Christianity came to challenge the practice, and changed it.

‘So it is important to preserve that aspect of our culture so generations unborn will know that we had a culture like that. That’s why we need to document it and show the world that this practice is real and indigenous to Ndi Igboukwu,’ he said.

Meanwhile, one of the conveners, Humphrey Obikwelu, said the lecture was intended to get the people aware about Igboukwu history and to sensitize them about the forthcoming workshop in August this year.

Ichi, according to the organizers, was a facial ritual scarification worn by mainly men of the Igbo people of Nigeria and that the scarification indicated that the wearer had passed through initial initiation into the aristocratic Nze na Ozo Society, thus marking the wearer as nobility.

Echoes of this tradition are found in the contemporary derivative word Ichie, which denotes a member of a class of titled chieftains amongst the Igbo. The celebration is poised to give insight into the history and culture of this town in Anambra State.

‘Due to its broad social, political, and economic signification, ichi was the most common of these markings. In the case of families of high social and economic status, ichi marks could be obtained for their children at a relatively early age. In adulthood one can also do it as an expression of one’s wealth and prestige,’ they said.

‘Ichi is seen as a sign of class stratification, not only by virtue of receiving the marks, but by the Nwa Ichi’s ability to ‘hire’ the costly implements used to make the marks.

‘In the mid-twentieth century, the ichi marking tradition was disrupted by the expansion of Christianity, which held that it was a fetish is practice. Ichi is celebrated as an important part of Igbo cultural heritage,’ he noted.