Igbos for a Progressive Nigeria, IPAN, a pro-Nigeria group of Igbo extraction, who describe themselves as working for the progress and unity of Nigeria and the Igbo Nation, has advocated for an integrated political grid across the country. The group also seeks to hold government across all levels accountable, especially in the Southeast and Nigeria at large.

The group during a press briefing at Adig Suites, Udoka Housing Estate, Awka, the Anambra State capital, Monday, February 2, 2020, noted that they were firm believers in the One Nigeria Project, adding that the they came together due to the desire to bring Igbos under a united umbrella to demand for good governance in Igbo land, and also serve as a platform to positively engage with people from other regions within Nigeria on matters affecting the country in general, and Ndigbo in particular. 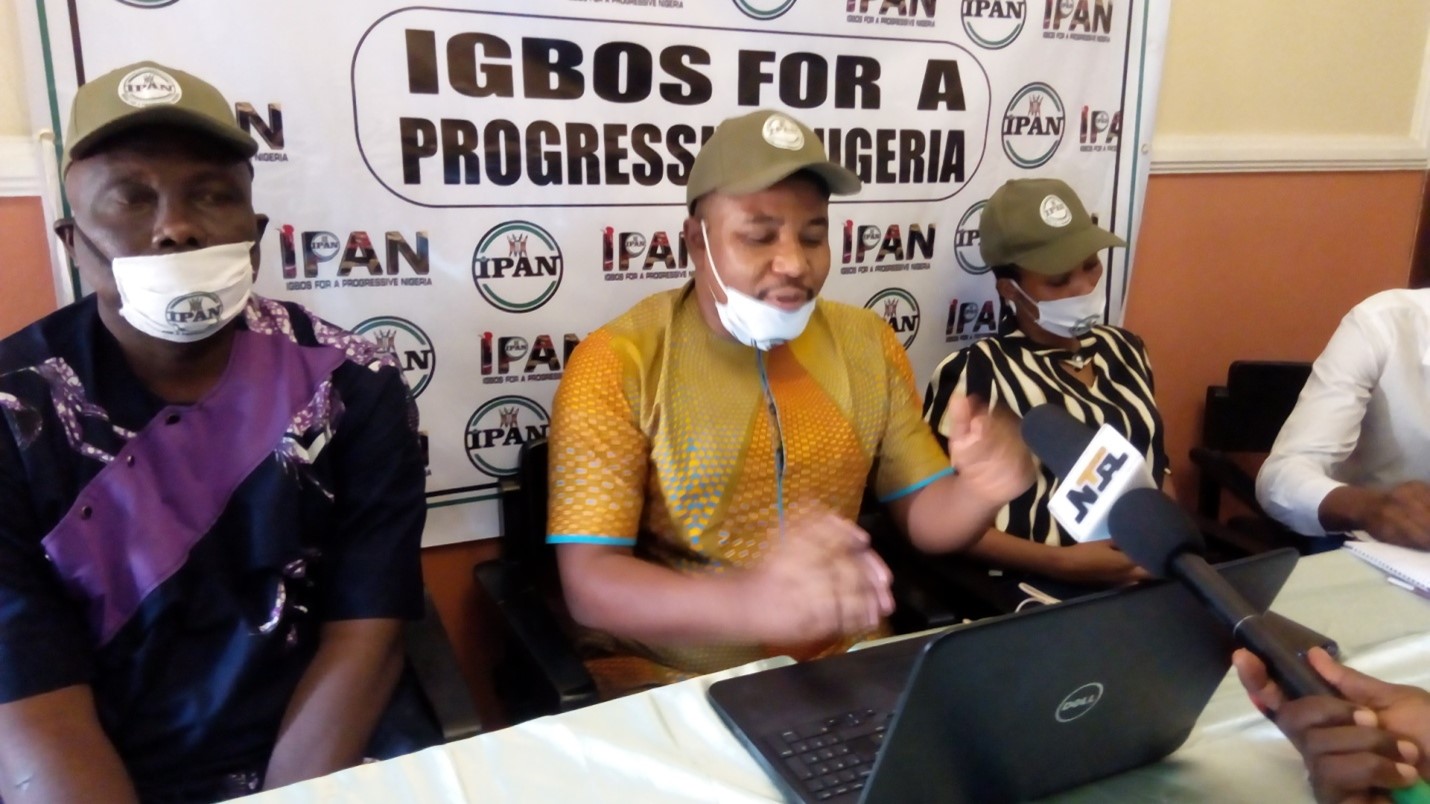 ‘IPAN is also desirous of a national political grid where the Igbo people are fully integrated in,’ they said, adding that they were working towards an Igbo presidency in the very near future with the support of indigenes from other geopolitical zones, noting that the Igbos would not be able to achieve a presidency without a mutual understanding between them and other ethnic groups.

They flayed past and present Southeastern governors for what they described as a clear picture of serious mismanagement of resources by elected and appointed officials, and said that most Eastern governors had only succeeded in impoverishing states they were elected to develop.

IPAN claimed that the zone had received a cumulative federal allocation of about N3.46 trillion as at September 2020; total internally generated revenue of N800 billion for the period spanning 1999 and 2019; and local government areas received the sum of N1.88 trillion in federal allocations from 1999-2017.

Commenting on security in the Southeast, they noted that there had been insecurity in some parts of the zone, arising from frequent communal clashes due to land disputes, kidnappings, as well as clashes between farmers and herdsmen, and called on the president and governors to tackle the issue headlong.

They vehemently condemned the institution and arming of the Eastern Security Network, ESN, describing it as the height of recklessness which must not be allowed to fester, while its supporters should be treated as enemies of the state. They therefore urged stakeholders not to look the other way and continue to blame the North for the woes of the East.

In their effort to stem the tide of farmer-herder clashes, IPAN met with the Southeast leadership of Miyetti Allah in Awka, with the hope of working together to find a lasting solution to the problem. However, the former, according to them, showed no seriousness in resolving the issue.

Naming a number of projects, including the construction of the second Niger Bridge and declaring support for a cohesive Nigeria, the group said they were delighted with the increased level of federal presence in the Southeast since 2015 when President Muhammadu Buhari came on board. They however enjoined President Buhari to see to the construction of the Onitsha-Owerri Road; completion of Owerri to Elele section of the Owerri-Port Harcourt Expressway, as well as the commencement of the Port Harcourt-Maiduguri Railway

Among other issues raised were government social intervention which they noted, the federal government had done fairly well, though most grassroots people still did not benefit; as well as police and judiciary reforms.