A renowned Broadcaster and Senior Special Assistant to the immediate past Governor of Anambra State, Mrs. Ify Aronu-Okafor has presented copies of her work on Public Speaking to Fides Media.

She described Fides as a trusted platform and a home to her, noting that she loved sharing her feats, no matter how small they were, with the organization due to the encouragement she had been receiving from both the management and staff, which, she said, propelled her to greater heights. 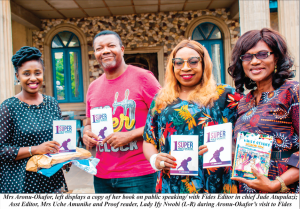 She emphasized the importance of public speaking in human growth and development, saying that children needed to develop the skill in order to boost their self-confidence.

She recalled that she saw the need for growing children, especially teenagers, to equip themselves with the messages contained in the text during the Awka Diocesan World Communication Week as organized by Fides. She said that after the Communication Week she had scheduled a meeting with her publisher in order to produce copies that would be affordable for the students as her previous production was on the high side.

She explained that public speaking had the capacity of elevating one to a greater level in life where such an individual could wine and dine with kings as she had experienced.

She said that public speaking had the capacity to liberate any person as it gave her a surname and could help ordinary people shine on the world stage.

She regretted that most people in Nigeria did not have a comprehensive and effective understanding of what public speaking entailed, saying that it was more of an everyday thing. She noted that developing self-esteem was linked to public speaking, saying that one could develop analytical skills needed for solving problems through it.

She advised those with stage fright not to give up on the art of public speaking but to devote themselves more to it in order to unravel the benefits attached to public speaking. She urged them to read a copy of her text on public speaking and put themselves in the picture while they read the text, saying that such persons could also reach out to her for more personal, tailored tutorship.