If You Were to Die Today, Would You Say your Home is in Order ?

I had this horrible experience on Tuesday, 7th June 2022. It was just like any other day. I had travelled to Lagos for the weekend, just one week after I returned from my Abuja trip. And yes, it was another family event. I was to be on the Air Peace first flight to Asaba which was by 7.10am. I had made plans of what to do when I got home. I had figured that if I landed by 7.50am, I would be home at least by 8.30am because there would be no traffic on the Niger Bridge to Onitsha by that time.

The bridge was usually free at that time of day. I had even called the airport taxi that usually took me home. His name is Kefas and he never disappoints if I give him notice, on time. So, there I was, happy that I had everything under control. I had checked in my bag, collected my boarding pass and was quietly seated at the lounge, waiting for boarding instructions.

I had even called my daughters that came home for the weekend to leave the house keys for me at the usual place as they usually left by 7.30am for the state University in Igbariam for their lectures. As far as I was concerned, I had everything in control. So I just settled down in my seat, watching other travelers either rush in or leisurely stroll in to settle in the lounge, depending on their flight time.

After a half hour delay, our announcement came and we all proceeded to the boarding gates. Shortly after, I was comfortably seated on my seat which was a window seat as always. I reached out to my folks in Lagos, thanked them for a good time switched off my phone, looking forward to a smooth flight back. Well, it was indeed a smooth 40 minutes flight until it was time to land. I was actually asleep until I heard the announcement that we had reached Asaba and were about landing.

I was happy and was already saying my silent ‘Thank You Lord’ in my heart of hearts for a beautiful trip and lovely stay in Lagos. Shortly after that, though, we had turbulence. The aircraft couldn’t land and I couldn’t fathom why. The noise we heard was not friendly at all and it kept on jerking as though we were in a truck that hit a brick wall. I tried to put myself together, not sure at first what the problem really was.

I looked around me, everyone was panicking. Then I looked out of my window, but everything thing looked okay. It wasn’t even raining, neither was it cloudy. Then my worst fear was, ‘Is the aircraft faulty’? Another thought crossed my mind: Is this plane about crashing??? Then I began to shake all over, but all the time trying so hard to keep my emotions in check and try to pray. Then, the announcement came. 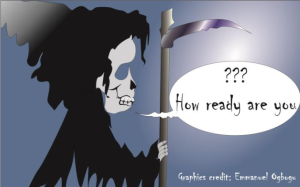 The captain announced that we were merely having turbulence and that it was under control. He told us not to panic but to relax until it was okay for us to land. The announcement made me muster some courage and I tried to relax. I was seated like a statue. Not moving. Not saying anything. Just talking to God silently in my mind and telling Him, ‘Please don’t let us die this way.

Forgive us of our sins and give us the chance to live’. I didn’t stop praying. I told God, ‘I trust you and I know you won’t let me down’. I just sat there in my seat, scared like I had never been and kept on quietly speaking to Our Mother Mary and our Lord Jesus Christ.

We kept on hovering on the sky for over one hour, so you can imagine the level of panic that was in that aircraft. Shortly after, another announcement came, but this time, it said we were to go back to Lagos because of their inability to land the plane, owing to the turbulence.

We were also asked not to panic and that the trip back to Lagos will not be at any additional costs. I guess our prayers were not in vain, because just about 10 minutes after the announcement about taking us back to Lagos, the pilot landed the plane. Immediately we felt the tires of the aircraft touch the ground of the runway, we clapped and clapped and clapped for the pilot. I was clapping, not just for the pilot, but for our Mother Mary and our Lord and Saviour Jesus Christ who never disappoint.

You know, it’s really sounds simple narrating this ordeal, but it was a most trying experience which can only be understood by the person in those shoes. I mean I travel a great deal, internationally and locally and have experienced turbulence at one time or the other.

I remembered my mum who still hasn’t recovered from the death of her daughter-in-law and now, mine? I thought about my two sisters and how I always thought I could never survive without them. I wondered if they would be the same again if I was gone. I remembered my five brothers. They are men, but somehow I didn’t see them coping with this at all.

The crazy thing is that I occupy a position in my family that makes everyone look up to me, when there is a family event or certain crisis. I remember when we lost my sister-in-law during the lockdown. My sister who was with her when she died called me immediately after. When she broke the news, I was too shocked to say anything reasonable, but I knew I had to keep my emotions in check because my other siblings would still call me.

True to type, my brother, Ike called from the USA after he heard the news. ‘Uche, tell me it’s not true. I calmly told him it was true and he broke down and cried like a child. I allowed him to cry his heart out. Shortly after, my other brother, Mezie, also in the USA, called in tears after he got the news too. Mezie is a very quiet young man. A man of few words. Hearing him breakdown broke my heart in pieces.

Yet again, I silently comforted him and told him to be strong. Then my little sister called and was too numb to cry. She said ‘Uche, I’m too shocked to feel anything. How are we going to bear this pain?’ Yet again, I told her God will give us the Grace. My mum also called me from the United States: ‘Uche nwam, ogini kam na’anu? Gini mere nwunye nwam?’ My heart broke into tiny fragments as I heard my 72 year old mum wail uncontrollably over the phone.

As if that wasn’t enough, my big sis called again: ‘Uche, what is the next thing to do? We’re here with the corpse and the doctor has certified her dead.’ So, I told her to call our relatives in Lagos and our in-laws to come to the hospital and see her remains before she is put in the mortuary. That’s what I mean. Everyone of them that called me, already heard the news but they still had to call.

Are these the people that I was going to walk away from??? Life! I think sometimes God wants us to think in certain directions, which is why he sometimes allows us to be in certain situations so we can really think about our lives and most importantly, our relationship with Him.

This is why I am writing this piece. It is important for every one to ensure that they always put their homes in order. Life is short. Nobody knows when death will come. When you visit so many homes, you will be shocked at the level of animosity that is shared by family members.

It is a shame to see an old man who knows that his children are not in good terms and yet does not do anything to broker peace between them that while he is still alive. Most times when certain men die, there is usually chaos  before and after their burial because there’s no peace in the family generally.

So many men leave their homes to embark on a trip even while they are quarreling with their wives, and vice versa. What if you don’t return alive? The emotional trauma alone, knowing there was no peace between both parties will kill the surviving partner. My appeal is a simple one. Keep your home in order continuously because you never can tell when death will knock on your door.

As for men who know that they have property that might be difficult for their children to share peacefully when they are dead. Please, share it among them now that you are alive. That way, even if you are dead and gone, there will be no crisis in your family.

As for me, I will always ensure my home is in order, whether I am just going for a short trip, a long one, or just as around the neighborhood. Life is truly short. It’s worth living well and right! Let’s all live it in such a way that even when we are dead and gone, we would view our homes from the land of no return and nod with pride that we did the right thing by putting our homes in order! Daalu nu!!!