The remains of the late Bro Innocent Anichebe Okoh, KSM, and his wife, Lady Catherine Akwuo Anichebe Okoh, were on Friday, May 7, 2021, interred in their compound, Umuokpu, Awka South LGA, Anambra State, after a concelebrated burial Mass. 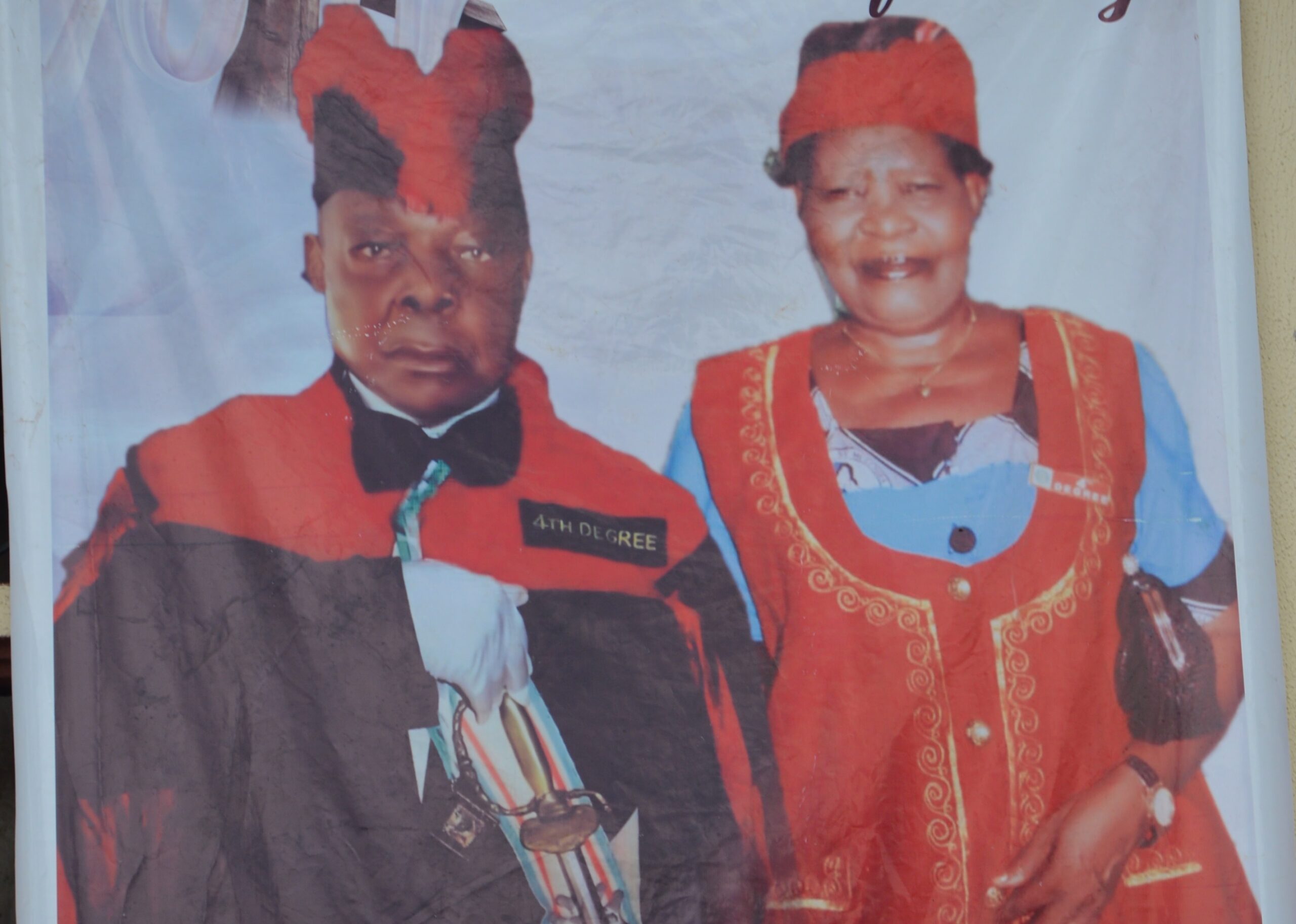 Bro Innocent Okoh, who was known for his outstanding generosity, even in his old age, died at 94 years on Friday, February 12, 2021; while his wife, Lady Catherine Okoh, died at 81 years on Friday, April 9, 2021. The deceased were described by many as an ideal couple who were committed to human, church and societal development.

Fides gathered that plans for the burial of the late Sir Okoh were almost completed with the posters already printed, before his wife joined him. The late Lady Catherine Okoh had been sick for many years.

Leading in the concelebrated burial Mass at St John’s Catholic Church, Umuokpu, the Catholic Bishop of Awka Diocese, Most Rev Paulinus Ezeokafor, in his homily, said the Holy Mass was to thank God for the life of generosity and sacrifice for the good of humanity and the Church spent by the deceased couple. 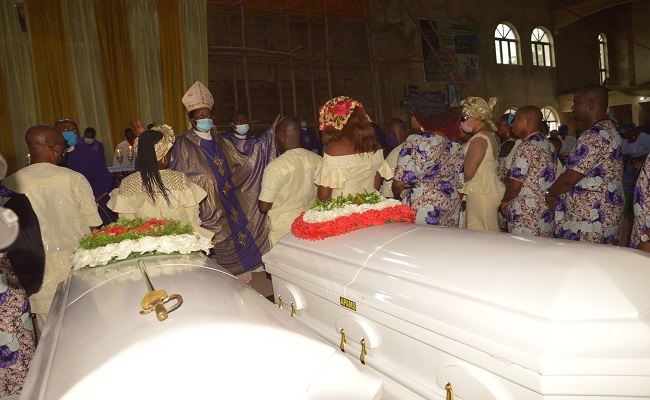 The Catholic Bishop of Awka Diocese, Most Rev Paulinus Ezeokafor, blessing the bereaved family members during the thanksgiving.

The Catholic prelate, who emphasized the importance of eternal life for man, charged all to guard the life which was given to them by God, and spend their life while being guided by the fact that the world was not a permanent abode, so as to gain eternal happiness in heaven.

He urged all to attach more importance to things that were beneficial to their souls so as to gain eternal life, and not to always lay emphasis on their bodily wants and earthly needs, which, according to him, were ephemeral.

Bishop Ezeokafor eulogised the late Bro Okoh for his contributions to the Church and human development, saying that the deceased, though an old man, was generous to the core. 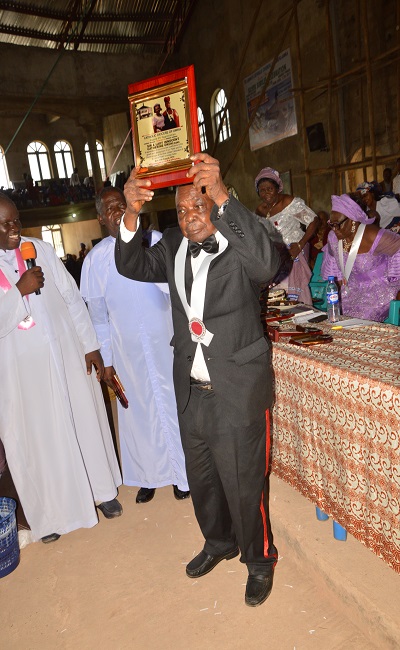 Memories: Bro Innocent Okoh shows the plaque of the Life Benefactor Award presented to him and his wife, Lady Catherine Okoh, by St John’s Parish Umuokpu at the Silver Jubilee Anniversary of the parish, Aug 11, 2019. 1st from left is the then parish priest, Rev Fr Peter Chikelue.

Most Rev Ezeokafor who observed that it was worthwhile for a couple who lived well to old age to journey to eternity the same time, urged the children, family and others, who were grieved over their demise, to accept their deaths as the will of God and sustain the legacy they left behind.

Speaking at the event, the parish Priest, St Dominic’s Parish, Adazi-Enu, Rev Fr Peter Chikelue, described the late Bro Innocent Okoh as a father who was a human and humane, as well as lived for the Church and humanity.

According to him, Okoh, fondly known as Ezeamalu and Ulukanachukwu, though not rich, gave from his heart and out of his desire, contributed to the growth of the Church.

Fr Chikelue called on the children and friends of Bro Innocent Okoh to contribute towards the ceiling of St John’s Catholic Church, Umuokpu Church building, saying that the project was the desire of the deceased before his demise. 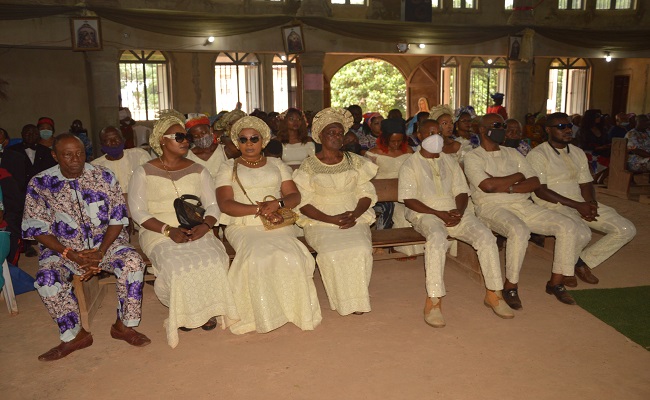 Family members at the burial Mass.

Rev Fr Chikelue, who recalled his relationship with the deceased couple from when he served as a former parish priest of St John’s Parish, Umuokpu, till their demise, said he shared a very close relationship with the couple. Narrating how he administered the Sacrament of the sick to Innocent and Catherine Okoh, and witnessed their demise, Rev Fr Chikelue thanked God for the life well lived by the couple, who, he said, died in the Lord. 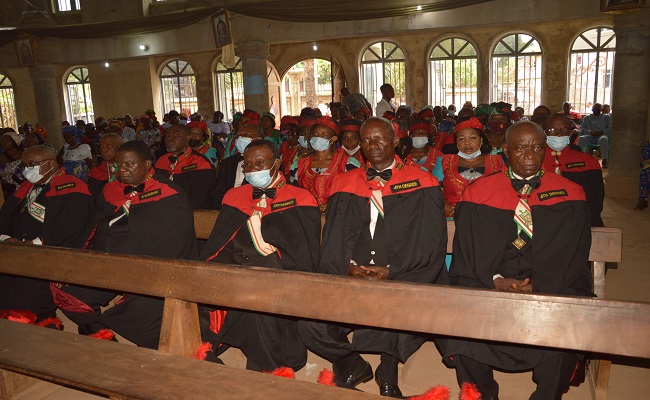 Knights and ladies of the Order of Saint Mulumba at the burial Mass of their late members.

Bro Innocent Okoh was until his death a homeopathic doctor of whom testimonies abound of many married women that God blessed with fruits of womb after they were treated with Okoh’s drugs.

The couple was survived by their nine children, grandchildren and numerous relations. 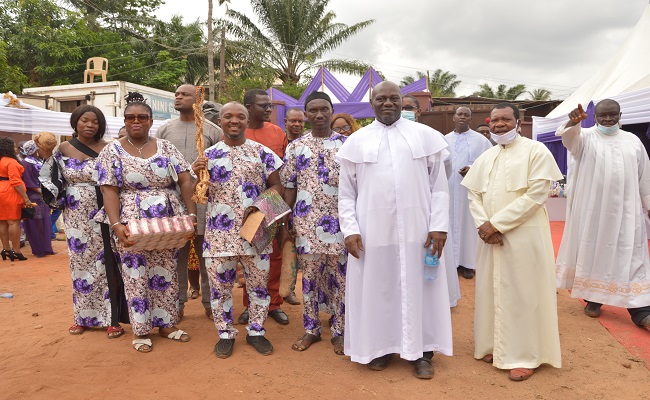 Rev Fr Peter Val Uzoezie (2nd from right), coming for condolence. He was accompanied by some priests, relations and his parishioners of St Francis’ Parish, Enugwu-Ukwu.