A Non-Governmental and non-profit organization, Ide Global Movement (IGM) last Sunday empowered five youths with three shuttle buses, one truck, and one Toyota Corolla, even as fifty women were empowered with twenty thousand Naira each, amounting to one million Naira to start up a business at the community’s market.

Fides gathered that aside the organization’s mission to enrich the masses positively, the founder of the NGO, High Chief Dr Azubuike Ekweozor, decided to put smiles on the faces of the beneficiaries in commemoration of his fifty-first birthday.

In his speech while blessing the vehicles, the parish priest of St Joseph’s Catholic Church, Umuawulu, Rev Fr Benjamin Odika, prayed God to bless the fruits of the labour of the founder through the empowerment, while praying also that the beneficiaries used it properly to alleviate their sufferings.

Fr Odika also prayed God to keep blessing Dr Ekweozor, while he advised other well to do personalities in society to borrow a leaf from the benefactor’s philanthropist lifestyle.

On the part of His royal Majesty, Igwe Joel Egwuonwu, Ezeudo 11, in Umuawulu, he described Dr Ekweozor’s largesse to his community members as awesome, describing his heart of benevolence as second to none in the community. 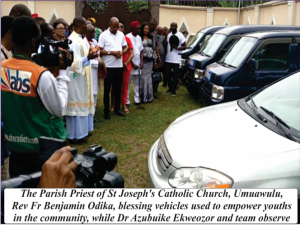 Igwe Egwuonwu maintained that Dr Ekweozor had been ‘a support machine to many families in Umuawulu and beyond’, hence, he prayed God to keep protecting him.

The founder, Ide Global Movement, and APGA Aspirant for Awka North and South Federal Constituency, High Chief Dr Azubuike Ekweozor, in his remarks, said he derived joy from seeing people happy, saying it was the reason he toed the path of benevolence.

Dr Ekweozor revealed that the essence of Ide Global Movement was to cushion the sufferings of the needy in society.