Select Journalists from the South East and North Central parts of Nigeria have been trained on techniques for Investigative and Data Reporting.

The three-day training which was organized by the International Centre for Investigative Reporting (ICIR), was geared at building the capacity of Journalists in investigating, expository, and reporting issues that are of public Interest by unravelling corruption happening within

The training which was the fourth in the series for the year, took place from Tuesday, 17th to Thursday, 19th May, 2022, at Ibeto Hotel, Abuja.

According to ICIR, the training was part of the center’s Open Contract Reporting Project sponsored by MacArthur Foundation, aimed at building the capacity of journalists in Investigative and Data Journalism.

In his address, the Executive Director of ICIR, Mr. Dayo Aiyetan, and the Programme Manager, Mrs. Gloria Agema, while welcoming participants to the training, urged them to take advantage of the training to develop themselves in becoming professional investigative and data Journalists.

The ICIR Executive Director explained that the Open Contract Reporting Project began in 2017 and was also aimed at training, mentoring, experience sharing and reporting finding in public sectors.

‘The project is aimed at building the capacity of Nigerian journalists to scrutinize and report on contracting and procurement processes. 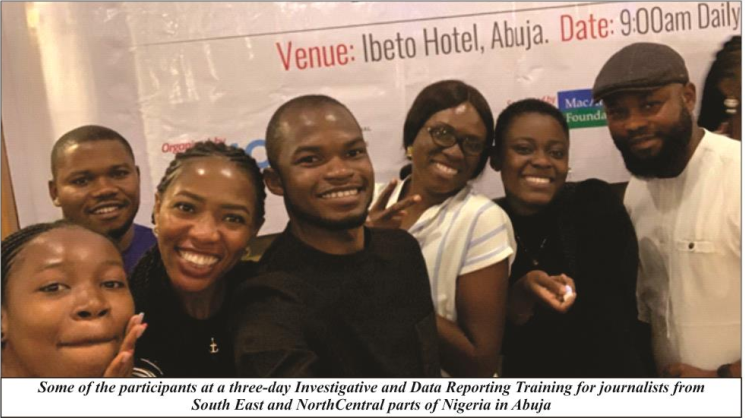 ‘Since the project began, The ICIR has organised capacity-building training for journalists and given funding to cash-strapped newsrooms in Nigeria to launch investigations related to public procurement and the budgeting process as a way of holding public officials to account,’ he stated.

Mr. Dayo explained that the select journalists were expected to develop pitches and work on stories that would unravel corruption in project execution, saying that journalists could do a lot in order to hold government accountable. He maintained that holding government accountable was one of the steps in reducing corruption in order to achieve a sane Nigeria.

For his part, the Nigerian representative of MacArthur Foundation, Mr. Dayo Olaide, said their sponsorship of the contract through All Nigeria Programme, focusing on corruption and accountability was to help Nigeria reduce corruption through investigative Journalism.

He challenged the participants to be change makers by using their profession and network to demand for accountability in governance at all levels.

In an interview, some of the participants described the training as informative and expository. They promised to transfer the knowledge gained at the training to their other colleagues and to as well pay more attention to Investigative reporting.