I will water you and fire you!

The atmosphere is politically charged. Campaign for the 2023 general election is in progress. Ungrammatical and political mouth grenades are being thrown at the electorates to solicit for their votes in order to clench the number one seat of the country, come 2023.

The presidential candidate of the Questionable Political Party (QPP) flagged off his campaign recently at a state stadium where thousands of his political adherents gathered in colourful attires. Hundreds of angry and hungry citizens trooped into the arena to hear his political manifesto.

They have vowed to vote only for the presidential candidate who will bring smiles on their faces, set food on their tables and curb the worsening insecurity ravaging our country Nigeria.

Indeed they have suffered as a result of bad governance which bedeviled majority of Nigerians for almost a decade now. The bad governance brought in anger, hunger, corruption, nepotism, economic hardship, unemployment, insincerity and insecurity.

They came into the presidential flag-off campaign ground with placards boldly inscribed in front and back:  “Enough is enough!”

When all was said and done, the gorgeously dressed and unstable presidential candidate mounted the rostrum flanked by his political aides and policemen. The anxious crowd stood and was waving the national flag and party flag in solidarity. The National Anthem was played and everyone stood like embalmed corpse. 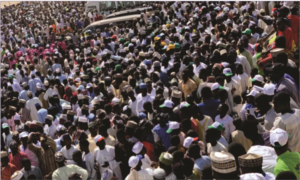 Then the Nigeria National Pledge was officially recited. Afterwards, the presidential hopeful stood before the public address system. He cleared his throat and shouted, “My people the messiah has come! If you vote for me as the President of the Federal Republic of Nigeria, come 2023, I will water you and fire you!” On hearing this ungrammatical and political jargon, the people reacted negatively.

They shouted, “No! No!! No!!! Do you want to water and fire us to death?!” They began to throw water sachets and fireworks at the presidential candidate from all sides of the rostrum. There was pandemonium and free fights. The policemen shot severally into the air to disperse the angry crowd. But they were not deterred.

For the fact that the bullets of the escorting policemen were exhausted, they dropped their guns, took off their uniforms and ran for safety. Thus the presidential campaign flag-off was disrupted. The angry crowd descended on the campaign food and drinks parked inside a big cooling van to quench that day’s hunger.

The half-baked presidential candidate of the Questionable Political Party (QPP) has already failed at the flag-off. Presently, our country Nigeria is witnessing catastrophic flooding here and there. People’s houses and shops have been submerged and billions of naira worth of properties lost.

The worst of it is that many lives have been lost as a result of the disastrous flooding. Hundreds of persons are unaccounted for. In Nzam in Anambra State, a family of six was swept off at night while they were deep asleep. In the morning hours their corpses were seen floating around.

The villagers were weighed down by uncertainties as they mourned and buried the corpses of the widow and her five children. Many others from the same place died from the flood menace. In Lokoja, Bayelsa, Benue and other riverline areas, the flooding caused various degrees of havoc.

In the midst of this water disaster, the presidential candidate in question had the audacity to say that he will ‘water the people.’ To add salt to an injury, he also promised to ‘fire’ them. Firing the electorate means roasting them to death. Anyone who escapes from water and jumps into fire is bound to die.

Indeed, ignorance is an incurable disease. You can have one thing in mind and then express it wrongly. The presidential candidate of the QPP wanted to assure the electorate that he would provide pipe borne water and electricity for them when voted into office. Unfortunately the suffering masses misunderstood him.

However, the Holy Scripture states that out of the abundant of the heart, the mouth speaks (Mtt. 12:34).I do not blamed the poor masses for ‘watering’ and ‘firing’ the dubious presidential candidate instantly because they have not gained any dividend of democracy from his previous political office as the governor of a state.

No one gives what he has not. The Latin people express it as “Nemodatquod non habet.” As a failed governor he would also be a failed president. The hitherto suffering Nigerian masses caged by economic hardship and bloody insecurity will fall from frying pan into fire in his hands. God forbid!

Recently in nearby country of Ghana, a politician aspiring to a high office invited the youths of his constituency to enlighten them on his political agenda. After delivering a marathon address, they gave him a standing ovation.

Give us employment!” In order to avoid being lynched by the jobless youths, the politician abandoned everything and ran for his dear life. It is better to teach someone how to fish than giving him or her fish from time to time.

In 2015 Nigerians were in purgatory. The outgoingfederal government promised us change and triumphal entry into paradise by then. Hopefully they got our mandate. As the years went by, instead of change we saw chain. We walked from purgatory into hell. Nigeria became the poverty capital of the world. Prices of essential commodities skyrocketed.

In 2015 a bag of rice was sold at N8,000. Now it is sold over N25,000. By then gas, fuel and kerosene were affordable. Today they have become unaffordable. Hunger has buried many Nigerians alive. Our jobless graduates are roaming about in the streets searching for non-existent jobs. Since an idle mind is the devil’s workshop most of them have turned into criminals.

Our hospitals suffer dearth of necessary equipment. Hence those in power travel overseas for medical attention, leaving the poor masses who voted them into office to die cruelly. The Academic Staff Union of Universities (ASUU) belonging to federal and state universities went on eight months’ strike, forcing millions of students to stay idle and hopeless for months.

Enough is enough. We Nigerians have suffered to the point of regret. The Almighty God endowed our country with abundant natural and human resources. Our problem is mismanagement by bad leaders from Independence till date.

It will not be business as usual in 2023. We must shine our eyes and vote for good leaders at the federal and state levels who will harness those natural and human resources for the good of all Nigerians. The era of squandermaniais over. We need a president who will bring us out from the pit of consumerism to the peak of productivity.

Nigerians need food on their tables. Our teeming youths want employment. Our lives need to be secured. The insecurity in the country is unbearable. How can we perish in the midst of plenty due to bad leadership? Let us weigh the current presidential candidates by their antecedents and manifestoes. We need a selfless, healthy, detribalized and younger president who is committed to restoring our country Nigeria among the Comity of Nations. God is waiting for us to make the right choice.