I was Once a Mason – Bishop Jonas Benson Okoye

Although not many people may know it, the Auxiliary Bishop of Awka Diocese, his lordship, Bishop Jonas Benson Okoye, once earned a living as a mason. Bishop Okoye, who disclosed this at the investiture of the new students of St Mary’s High School, Ifitedunu, in Dunukofia LGA of Anambra State, said he was using the story to encourage the students on the virtue of hard work. 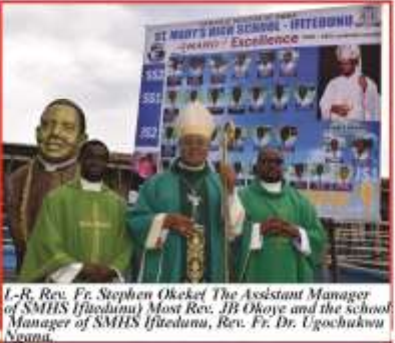 Speaking at the event which also saw the appreciation of some outstanding students with awards of excellence by the school, Bishop Okoye said the knowledge he gained then as a mason was still with him as he could do plastering work up till now.

He said the nature of his work then never stopped him from reaching the level God had for him, and that it was instrumental in one way or the other to his being a bishop today.

‘People used to call me Onye Mason. Some actually laughed at me, but I was ambitious in life and remained focused. You can then judge for yourself seeing me today,’ the bishop said.

The Auxiliary Bishop was a guest at St. Mary’s High School, October 17, as they celebrated the investiture of their new students; award of excellence to the best students for 2020/2021 academic year, sponsored by an old boy of the school, Hon. Lawrence Ezeudu of the Cheleku fame. The school also inaugurated the new academic year, 2021/2022, with its goal, “To become a role model for all through academic excellence”. 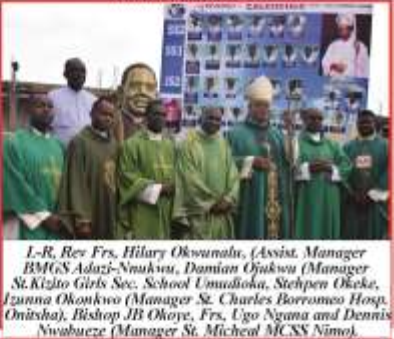 He also commissioned a borehole project by High Chief Dr. Obiora Okonkwo, at the school premises.

Leading in the Pontifical Mass, the bishop noted that anyone who was not ambitious in life could only have themselves to blame. He said there were two kinds of ambition; worthy and pernicious ambition.

‘Ambition spurs us to achieve great things in life. Worthy ambition is determined by good motive that drives it, while pernicious ambition is otherwise. No progress in human life can be achieved without ambition,’ the Local ordinary noted.

The Bishop advised parents, teachers and the School Management, to remain faithful to their ‘good work’ in the school and congratulated the newly vested students; even as he exhorted those who won various awards of excellence not to rest on their oars. 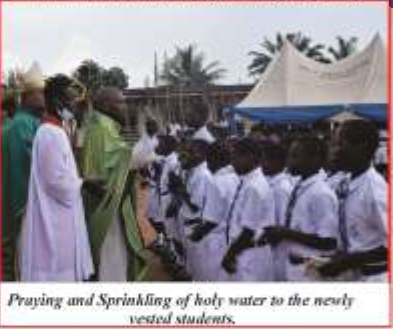 In an interview, the School Manager, Rev Fr Dr Ugoo Ngana, thanked Bishop Okoye for a colourful ceremony, and also his assistant, Rev. Fr. Stephen Okeke, noting that annually, they set their achievable goals, and as they entered the new academic year, they evaluated their performance and rewarded those who singled themselves out in various subjects.

He thanked the sponsor of the academic awards, Hon Lawrence Ezeudu, who started it the previous year and promised to renew it yearly; while on the borehole project, Fr. Ngana thanked High Chief Obiora Okonkwo for giving them a new borehole.

He noted that Chief Okonkwo had love for education and constantly offered support to young people, while also giving full scholarship to some students.

‘We keep him in prayers for God to grant him his heart’s desires,’ Fr Ngana concluded. 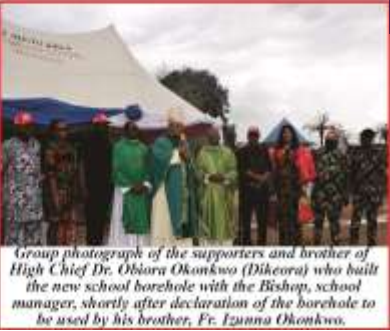 Some of the students who received awards were, Udobi Chukwudi in JSS1 with 84.7 percent; Edomani Aghachukwu in JSS2 with 86.7 percent; Enechukwu Arinze in SSS1 with 84.3 percent and Okonkwo Chinedu in SSS2 with 80.6 percent. 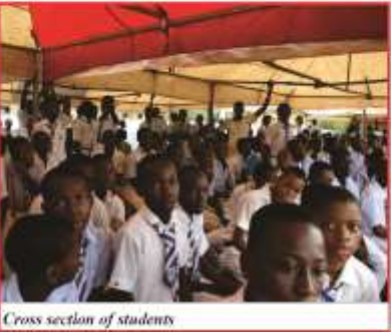