This week on Inspirational Personality page, we were honoured to have Rev Sr Dr Joyce Ezeugo of the Daughters of Mary, Mother of Mercy (DMMM) congregation.

Rev Sr Dr Ezeugo is a medical Doctor, an Obstetrician and a gynaecologist, an emergency medicine specialist, a hospital evaluator and one of those that help God in nurturing the souls of people around her. She hails from Adazi-Enu in Anaocha LGA of Anambra State, and was born on the 12th day of May 1976 at Okpoko, ”one of the slums in Onitsha”, as she called it. Dr Ezeugo while discussing with us about herself, took us through her childhood experiences in a community called Okpoko, in Onitsha and how from the streets she has succeeded through life with God by her side, hard work , resilience and commitment.

Here is the excerpt of the interview we had with her:

Growing up was not easy, but honestly family is very important in the development of any child. I was born in a polygamous family where I was the seventh child. My mum gave birth to nine children and the other two wives had four children each. My mum was the youngest of the wives, and every wife was bound to take care of their own children due to the state of things back then. Unfortunately, my mum who married at the age of fourteen had her first child at the age of fifteen. 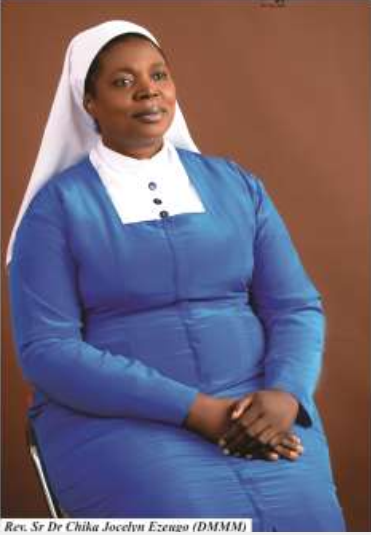 Looking at the overview of my family background, you will know that growing up was never easy. Initially I was enrolled into morning school but when things became more difficult, my mum had to enrol me into an afternoon school, so that I could help to hawk breadfruit for my mother. My elder sister refused blatantly to hawk, but I had to do it to ease my mum of the work. Every day I spent my morning selling breadfruit and then go to school late to end up receiving strokes of cane.

That didn’t draw me back academically, my grades were still outstanding, even though the first two terms when I started hawking, I took 5th and 7th position. Another thing is that I never missed Block Rosary any day.

One thing that motivated me the most was my mother who would never accept any form of lackadaisical attitude from me. I remember when I took fifth position in school, my mum who did not see any four walls of formal education, was mad at me for not coming up with the first position.

That alone made me work harder. Growing up in a slum was never easy. You can imagine nine to ten people living in a room apartment. But when you look at my parents, living in love, consistency to survive was very encouraging and kept me in check.

That is why I frown at parents especially mothers who don’t take care of their children. Fortunately for me, when I finished from Okpoko Community Primary School Four, I came out with good grades. I took my Common Entrance and I gained admission to study for free at Queen of Rosary College, Onitsha. I did not like that school, because I wanted to go to Juniorate school, where Rev Sisters train students.

I knew my mum could not afford the school fees, but I had wished to study there. When I told my elderly siblings about that, they shut me up. I had already made up my mind to register at Queen of Rosary College, Onitsha, when my eldest brother returned home one evening, and told me to get prepared for Juniorate.

But he said the condition to attend the Juniorate, was that I would not ask him for any money for provisions, because he would not pay such big fees and pay for my provision. I immediately accepted because I fancied the life of the students at the Juniorate. Loosing getting admitted to the Juniorate was something I never wanted to hear, and because of that, I obeyed all his instructions as a little girl of 12 at that time.

However, at that tender age, the hunger was so unbearable. And I had no will of my own to say, “I want to go to my mother’s house during the holiday.” I always stayed with my brother who was a very strict person. As a reserved person that he is, socializing with people around the area was difficult for me because he doesn’t allow me to talk to anybody. And then to avoid problems I must always follow his instructions.

My brother’s instruction of not talking to anyone affected me even though it helped me to some extent. However, because the people in the compound where we lived, loved me so in a very good way that I could not even explain. Just to live in peace and maintain a good relationship with them, I devised means of waving at the elderly as a sign of greeting whenever I pass by.

My Performance at the Juniorate …

My first and second term in Junior Secondary School 1 I took 5th and 7th position respectively. My brother encouraged me to do more. In the third term where the three terms were merged; I took first position. When I took first position, I was happy even though I did not know how to celebrate it compared to other students whose parents were either principals or teachers, mine was just a petty trader. From that first position in third term, I maintained it till I finish from that school.

Doing excellently well made my teachers love me. When I took my Junior West African Examination Council examination, I came-out as the overall best student. And from then, I was made a Regulator. Being a Regulator helped me to be punctual and gave me the responsibility of a functionary in SSS1 among my counterparts in Senior Secondary School 2. As a functionary, kept me away from dangers and maltreatment from the senior students.

Something happened to me at the Juniorate

However, a funny incident happened while I was at the Juniorate. Most of the students who lived in Onitsha were from refined places such as: Awada, GRA and what have you. I was the only one living in Okpoko then. It made me shy to mention the area I lived in Onitsha to other students. Students kept asking me where in Onitsha I lived and who my parents were, I kept dumb ears to these questions because, then as a child I was never proud of my background.

As mischievous students can be, one of the students who came for her aunt’s wedding around where I hawked breadfruit for my mother during the holiday saw me. She went back to the school and announced to students that she saw me hawking and that her Aunty bought some breadfruits from me. The news of me hawking breadfruit circulated around my school, but no one had the courage to approach me.

Unfortunately, some of the students who had guts, planned a coup against me to find-out where I stayed. They found where I stayed, and eventually they came unexpected during the holiday.

It was a shocker to me, because I knew they had a mission, I bought them snacks from the money I gathered for my provision just to appease them.

Even with my effort of buying them over, as children that they were, they still said all that they saw. They noted they saw rats and made mockery of my family even as they were seated in our compound. This made my neighbours to ask questions if really those girls were my friends because of their ill behaviour towards me. And I said yes! “They are my friends”. After they had finished eating the snacks, they left.

Their visit gave me thoughts of changing my school. I knew I was finished as I will be an object of mockery and ridicule when school resumed. After some time, I determined not to let their opinion regulate my life. I discussed it with my sister, and she said it does not matter at all and that whatever it was, it will only last for one year.

When we resumed, there were gossips making rounds until I was asked if truly, I leave in a dirty place, I was then bold to say Yes! I was determined that where I came from would not deter my future.

To be continued in the   next edition.