The Vice-Presidential Candidate of the People’s Democratic Party, PDP, in the 2019 elections, Mr. Peter Obi, has recalled how he nearly quit politics until the likes of Fr. Patrick Omuta intervened. Obi made the revelation during the requiem Mass for the late Fr Patrick Omuta at the Basilica of the Most Holy Trinity, Onitsha. 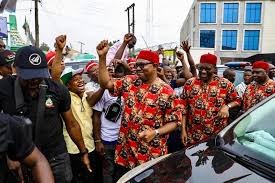 Reacting to the comment made during the Mass by the homilist, Fr Celestine Aniofor, that the late Fr Omuta had, at a time, urged Obi to remain active in politics, Obi said his experience in Nigerian politics had nearly made him contemplate quitting politics at the time he was about leaving office as the Governor of Anambra State.

‘I contemplated quitting politics. The dirt, insincerity, greed, selfishness and many other human vices that pervade the Nigerian political sphere were too discouraging for me to continue. I had made up my mind to quit active politics, and just keep contributing to nation building from my private space.

‘Then on one occasion I attended an event at this Basilica, I made my intentions known to the priests and religious present. Omuta, having listened to me, spoke at length and gave me reasons I should remain in politics to cause positive change. He recalled my achievements in education, health and the Millennium Development Goals (MDGs) and urged me to remain active in politics to keep shining the light on the dark corridors of power.

‘His words, just like those of the late Archbishop A. K. Obiefuna, who also spurred me on, rekindled my political desire and gave me courage.

‘Till today, we have a political system in the nation where the people have refused to do what is right. The problem of Nigeria is the elite and greedy politicians who are hell-bent on looting the nation dry. But with people like the late Fr Omuta who urged me on, I am now firmly resolved to continue to try to cause a wave of positive change in the country.’

Obi further recounted how Omuta played significant roles in improving the health services of Onitsha Archdiocese as he kept working closely with his administration and his MDGs team: the then Chief of Staff and Chairman of MDGs Implementation Committee in Anambra State, Prof Chinyere Okunna, and the Special Adviser on MDGs, Mrs Vivian Nwandu.

‘The achievements recorded by the health sector of Onitsha Archdiocese will not be complete without Omuta’s inputs. His death is a great loss to us all,’ Obi mourned.

Earlier in his homily titled, “Do not be deceived”, Fr Celestine Aniofor described Omuta as one who loved God and desired to please Him. He described Fr Omuta as a bundle of talents given to Onitsha Archdiocese by God.

He further called on Christians to live their lives for the love of God and humanity, loving one another in truth and in spirit.