The Catholic Bishop of Fort Wayne, South Bend, Indiana, United States of America, Most Rev. Kevin Rhoades, says he has known the Catholic Bishop of Nnewi Diocese, His Lordship Most Reverend Jonas Benson Okoye, even before his consecration as a bishop, when he worked as a Judge in America.

Most Rev. Rhoades who stated this on Saturday, 16 July 2022 at St. Patrick’s Catholic Cathedral, Awka, during the ordination of eleven priests and one deacon, expressed gratitude to the faithful for a warm reception.

‘Today and forever, you have the seal of Jesus Christ as a good shepherd; this sacred character is something dynamic because you are now an instrument in God’s hand,’ he said.

He told them that they were configured to speak in the name of God as soul winners for the kingdom.

The visiting cleric urged both new and old priests to positively impact society as they did the Church, adding, they should be servants of God and the people. 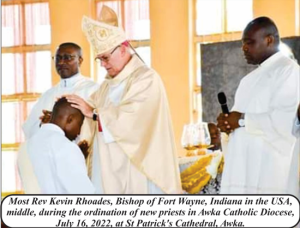 Rhoades who maintained that priests should be prayerful also charged them to emulate the Blessed Michael Iwene Tansi.

It was gathered that Bishop Ezeokafor was out of the country for some undisclosed reasons.

Fides reports that the 10 priests were ordained, among whom were Cosmas Emengini, Samuel Ezeafulukwe, Augustine Igwebuike, Vitus Onyekaba, Constantine Okoli and Cyriacus Ezeamaechi.

Others were Dominic Anyaharaekwule, Kevin Nwakpu, Aloysius Odogwu, Nicodemus Izuchukwu; while Innocent Uchenna was the only person ordained a deacon.

The Vicar, Awka Catholic Diocese, who welcomed Most Rev. Rhoades, used the medium to remind the congregants of the need to obtain their Independent National Electoral Commission (INEC) Permanent Voter Card (PVC) ahead of 2023 elections.

He also advised the faithful on the need to avoid falling prey to agents of vote buying during next year’s elections.

The ordination Mass attended by Bishop Jonas-Benson Okoye of Nnewi Catholic Diocese, also had more than 200 priests and hundreds of Catholic faithful in attendance.