I Have Come to Appreciate You – Director, South East Area

The Director South East Area Office, Mrs Nwatarali Dorathy, who was on familiarization and sensitization tour of  the  NYSC formations in the South East, recently paid a courtesy call on   Security Agencies in Ebonyi State. She conveyed the Director General’s appreciation of the collaborating agencies for their support and cooperation in ensuring safety of corps members and staff before, during and after the orientation programme. 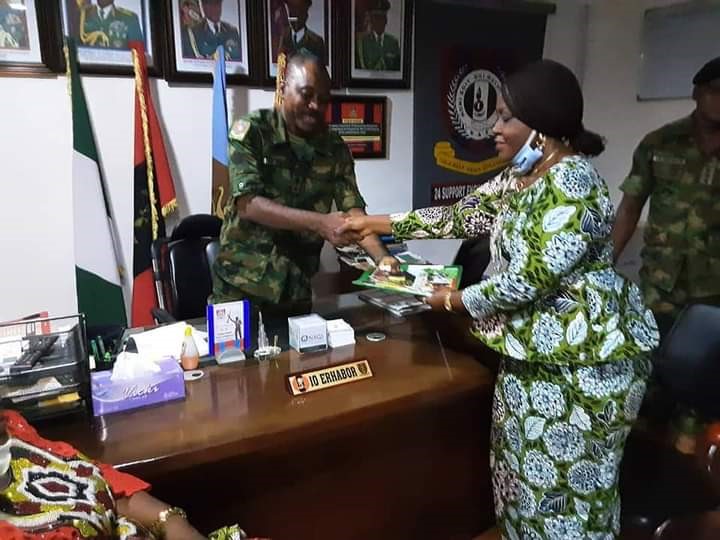 Mrs Nwatarali, during her official visit to both the commander Military Cantonment Abakaliki, Lt. Col. I.O. Erhabor and the  Director State Security Service, Mr. Aminu Herma where she solicited  the security Agencies  to beef up security around the corps lodges and  the orientation camps, this  period of rising insecurity in the South East, to ensure protection of lives and property.

She commended the synergy and robust relationships between NYSC Ebonyi State and the collaborating security Agencies over the years and encouraged its sustenance.

Responding, Lt. Col. Erhbor, thanked her for the visit, while reassuring her of their total support in providing security for the Orientation Camp and corps lodges

For his part, Director SSS, Mr Herma, assured the Director that action was in progress in that direction,  adding  that the relationship between the NYSC and the SSS is that of a family, and pledged its continued cooperation on surveillance.

In a vote of thanks, the State Co-ordinator Ebonyi, Mrs Bamai Mercy, commended the two organizations for their prompt response to the NYSC, when the need arises. She commended the soldiers and the SSS officials who work with us at the camp, describing them as highly disciplined and dedicated to duty.

The visit also took the Director to NYSC Rice Mill Ezilo, and the NYSC State Secretariat where she addressed and sensitized the staff on ethics and the need to avoid any action that will tarnish the image of the scheme. She encouraged them to ensure team work, intergrity, patriotism, commitment and loyalty to the scheme. She extolled the staff of the state secretariat for the peaceful relationship which transcends from year to year and attested that she enjoyed that peace, when she was the state coordinator in Ebonyi. She enjoined the staff to give the State co-ordinator their support to ensure good service delivery.