I came too early Okocha Jokes 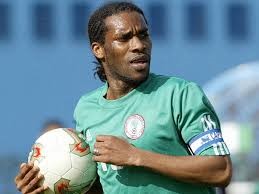 Okocha, a quick and skillful playmaker, who is considered as one of the best Nigerian footballers and players to come out of African continent, told newsmen in a telephone chat soon after the news of Messi’s big pay broke out that his time as a footballer came too early.

‘I came too early and Messi came at the right time,’ Okocha joked. ‘If I was paid such amount of money in my playing days, maybe I would have stayed back in France forever. I wouldn’t have thought of coming to Nigeria.’

Jay Jay Okocha’s magical display lured many Nigerian fans to French League in his playing days. In 1998, the Nigerian set a transfer record when he left Fenerbahce in Turkey to PSG in France on a fee of £12.4 million, which was the highest by an African player at that time. He left PSG for Bolton Wonderers in England in 2002 on a free transfer.

For many Nigerian fans, Okocha’s magical skills on the field of play is comparable to whatever Messi offers in present day football.

Messi, who has won Ballon d’Or six times, now prepares himself for a new life in Paris, after he parted ways with Barcelona. He said he feels betrayed by the club he has given so much to. Barcelona had asked Messi to accept a 50 percent reduction in wages, which he accepted without even trying to negotiate it.

But the club later told him to leave, claiming that getting the Argentine to remain in Catalonia would ruin the club.