I believe in Using Research to Solve Problems Dr Ugboaja

Nnamdi Azikiwe University Teaching Hospital, NAUTH, recently got a new Chief Medical Director following the demise of the former one. The new occupant of the office is Dr Joseph Ugboaja, who has also been recently promoted to the cadre of Associate Professor.
In this interview with Fides’ Rev. Fr Martin Anusi, Mercy Hill, Alexander Johnson Adejoh, Precious Ukeje and Adejumoke Alebiosu, he reveals a number of things about him and his trajectory from clinical practice to hospital administration. The new CMD, who was Chairman, Medical Advisory Committee, before his most recent appointment, also shares his vision for the institution, noting that the teaching hospital is aiming at being among the first five in Africa.

May we know you, sir?

My name is Dr Joseph Ugboaja. I am from Anambra State. I am a gynecologist and obstetrician by training, but currently, I am the Chief Medical Director of the Teaching Hospital. So, I am managing the institution as at now.

When did you begin your job in the hospital?

Okay. I did housemanship; I trained here. After the house job, I went for service in Delta State and after the service, I came back immediately and started my residency training. That is, the post graduate training. That was way back in 2006. I finished that training 2010/2011 and got appointed as a consultant obstetrician and gynaecologist.

Two years into that appointment, I was appointed as the Deputy Chairman, Medical Advisory Committee (CMAC) of the Teaching Hospital. That was in 2013. That marked the beginning of my journey into hospital management. It is a little bit of deviation from clinical practice, but I was combining the two. So, I was the Deputy CMAC, a kind of the number three man of the Teaching Hospital, from 2013 to 2017. So, I did that job for four years. 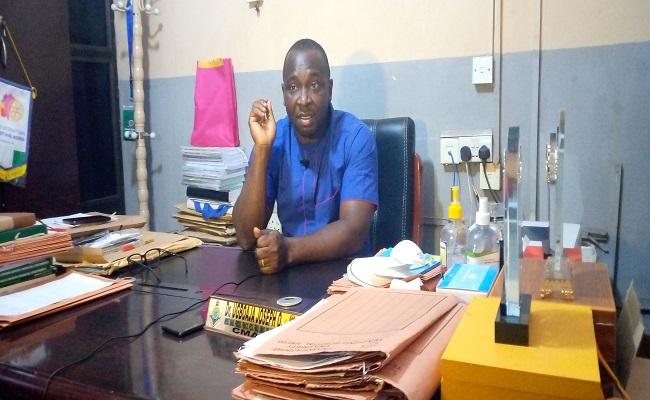 That was in 2017. It is a two year renewable tenure. I did the first one from 2017 to 2019. After that, I was reappointed for another tenure which would be from 2019 to 2021. So, I was in that last tenure until this appointment. And then, just last month, precisely January 25th, I was appointed the Acting Chief Medical Director. And that is my trajectory in hospital management: it is comprehensively seven years of hospital management.

When you won the election, was it a surprise to you that you were elected?

No, it was not really a surprise to me. It was something I actually expected and knew may happen going by the schedule of events here. I know eventually that if the Chief Medical Director finishes his tenure, and we’ve not gotten a substantive appointment, the hospital will be handed over to me until such a time we have a substantive appointment. And it’s also something that is not way out of what I’ve been doing.

I’ve been in the management for seven years, and I have been actively involved in managing the hospital. So, it was a natural thing to me. However, what happens now is that it became an increased responsibility because as at today, officially, I am the Acting CMD, but in terms of event, I am the CMAC and the Acting CMD, because we’ve not gotten any CMAC.

Why has the hospital not appointed another CMAC?

It’s not for me to say. The appointment of the CMAC will be for the Board and the Ministry.

Are there no hospital regulations of how this will be done?

When the position becomes vacant, that is, when the Board declares it vacant, normally someone will come in acting position. So, I expect the Board sooner than later to get somebody in an acting capacity if they so wish. If they don’t, they will start with the process.

The process will start with the Board communicating the MDCAN, the body of consultants, that this position is now vacant and open for contest. So, interested individuals will apply and start campaigning. The MDCAN will do the election, then shortlist and produce three candidates which they will submit to the Board. The Board is at liberty to appoint from any of those three. So, it is a Board appointment really.

What was your best experience as CMAC?

You know I played football. The CMAC is like a midfielder in the football pitch. Thus, it’s like a clearing office for clinical services in the hospital. If you play football, once you have a good holding midfielder, he breaks the play, initiates the play.

Once you have a very good one, your attackers will be doing very well, and your defenders will not be overstressed. That’s the job of the CMAC. But essentially, it has three thematic areas: training, clinical services and research. So, the CMAC anchors all that. All the heads of departments report to him directly while he now reports to the Chief Medical Director.

As the CMAC, we actually worked along those three thematic areas very well, and it was fun and exciting. Actually, it marked a paradigm shift in the clinical services areas. We had a lot of activities then. In terms of research, because I love research; I have written profusely. As we speak, I have well over seventy papers published in reputable journals. And the truth of the matter is that you cannot improve any system without research.

You have to know what the problems are before you can interpret them, and the process of getting what you want is research; just to be a little bit objective and methodical. For research, I formed the NAUTH Research Society which is doing very well now; brought everybody into the society and held lots of trainings for them in research methodology, grant writing and their likes.

They picked interest and started writing. We have eleven thematic areas in that research, covering oncology, maternal and child health, all sorts of things. Then, I also initiated the Annual NAUTH Scientific Conference for them. We are actually the first Teaching Hospital to initiate a scientific conference. After that, Lagos University Teaching Hospital, LUTH, started.

Now, the essence of that conference is to give vents to the output from the Research Society. Research Society will teach you how to do research, scientific writing. However, publishing is another thing. I had wanted them to gradually take it bit by bit: first, get the confidence from presenting at our local conference, then go outside and present in a conference and publish.

The first year we ran that conference, we had over sixty well researched papers presented along thematic areas. The second year, we had similar output. We’ve had two editions of it before COVID-19 stopped us. Then, we started the process of getting a hospital journal.

The journal will also serve the purpose similar to the conference. It will also give vent to our research. But more importantly, we found what we called SHIP, Service and Health Improvement Project. It is an innovative product. Now, what was it doing for us? You know as a hospital, as I told you, I believe in using research to solve problems.

In the SHIP, if you are able to identify a problem that we have and give us a very clear roadmap on how to solve that problem using research mechanisms, that shows that your methods are objective. We will facilitate that process; fund it from beginning to the end and then, we use the output to improve the hospital.

For instance, if you come to my clinic and find out that the patient waiting area is one hour, that is, most patients that are waiting to see the doctor will wait for one hour before they see the doctor. That is a problem. The allowable waiting time is 15 minutes globally.

Now, causally, if you walk into my waiting area and you find many patients complaining that they have been waiting for a long time to see the doctor. You want to know why the waiting area is long; why a patient had had to stay one hour before seeing a doctor. If you are able to show me that you want to explore this particular problem; to find out why our waiting time will not be 15 minutes which is generally acceptable, you want to use research mechanism, meaning that you need to now interrogate my processes from payment, obtaining card, you may have to observe them and all that.

You produce questionnaires and conduct interviews, so that at the end of the day, you will be able to say these are what we have been able to find out. These are the things responsible for the patients’ long waiting, meaning that if I tackle those problems, I will be able to solve them. Then, I will sponsor the research. So, that was SHIP and that helped us a lot. We are doing problem-solving research and it’s helping us a lot.

Another thing we did was the Ethical Committee, because, again, times for ethical review can either be an incentive or be a discouragement for research. But before you do research, you do ethical clearance. So, before I came, the Ethical Committee was doing manual review.

Then we had to upgrade them to online review. That is as per the research. In terms of clinical services, it is the job of the CMAC to ensure that services you offer are of high quality. More importantly they should be affordable. So, your services should be patient sensitive. No matter how much quality your services have, if they are not sensitive to the patients’ feelings, you have not done much. And that was my mandate.

But when I came up, I noted that many patients here were not happy with the quality of services that were given to them. So, I quickly put together the Quality Improvement Committee and gave them the assignment to go and find out why the patients are not happy. They conducted what they called Patient Satisfaction Survey, PSS, with the aim of ascertaining if patients were happy and what informed their positions.

At the end of the day, we took an average and now began to see the departments that were doing well in terms of staff attitude. So, on the strength of those findings, we mounted what we called Attitudinal Change Seminars and Workshops, and we’ve had quite a lot of them involving all the staff with the aim of improving their attitudes toward patients and then, we now did other stuff trying to monitor their attitude to patients: getting feedbacks, applying disciplinary measures and trying to observe the attitude of those who are not doing well, how they are doing and all of that.

(To be continued in next edition)