I Beg Thee on their Behalf

Among the Igbo people of Eastern Nigeria is this proverb that says that the anger of a sibling against a fellow sibling does not reach to the bone. This is probably because of both being of same blood. What is happening in the Southeast today, a zone where we are supposedly brothers, show signs that this proverb has either lost its meaning or is flagrantly being flouted.

This past week went down in our recent history as the worst in Anambra State. On Tuesday alone, a total of between eight and nine people were killed by gunmen at Afor Nkpor. Of that total, only one was not our ”brother”. But the tale did not end there. 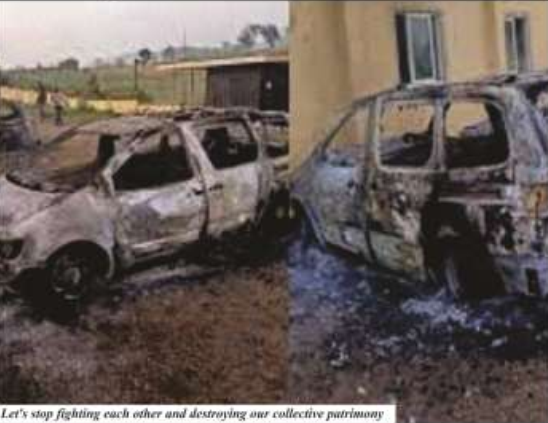 On Thursday came more horror stories of the burning of a police station in Ajalli, Orumba North LGA and the killing of Chris Azubogu’s driver alongside three okada drivers in Nnobi. However, Azubogu was not in the car. Azubogu recently failed to emerge as Anambra PDP’s governorship standard bearer after which he joined APC.

In fact, the way it is now, one can expect attacks every day and that’s not good enough.

Ndigbo have always been known as peace loving, hardworking and friendly people. We are not a people associated with violence but today violence is rocking our land. Where did we get it wrong?

From what we hear, some people are angry with the leadership. They believe their leaders have failed them and have continued to fail them. They also accuse them of wasting our youths with the help of the police. They point also at the atrocious acts of men of the proscribed Special Anti-Robbery Squad, SARS.

The actions of these men have proved to be far more than those before their advent. They attack prisons, they free hardened criminals, they burn INEC offices, they kill security personnel and now they are going after the political class. They say they are still angry with the leaders.

Yes, I accept that our leaders have failed us. They have been living like kings and we have been living like paupers. Indeed, the quickest way for anyone to make money today is to join politics, especially the party in power. Overnight the fortunes of such a person change for good, while people like civil servants who toil for their meagre pay are left to wallow in penury.

Yes, our leaders have failed and are still failing. In the wake of attacks by Fulani herdsmen, the Southeast governors had formed a security outfit fashioned after that of the West.

The one formed by our governors was known as Ebubeagu. It was supposed to go after the marauding herdsmen. However it never took off. In fact, it never had funds to operate with and shortly after, its commander resigned and that was the end.

The Indigenous People of Biafra formed their own known as Eastern Security Network, ESN. That too has not lived up to billing. But at least we all know it was a child of circumstance because of the failure of our leaders to protect their people.

If there’s anything that points to the hopelessness of the leadership situation, it is the apparent inability of the leaders to tackle the growing menace of non-state actors who have now virtually taken over the region.

In Anambra it is much the same scenario and is even worse now. With the election coming up fast, and with the rate at which the UGM are operating, the possibility of that election holding is becoming dimmer by the day, especially when the agitators have issued a no election order.

In fact, after they killed an Hausa man at Nkpor last Tuesday, a note was seen with an inscription saying no election beside the dead man.

All this show that the government of the day and the security apparatuses are not able to secure the citizenry. So if those we look up to are no longer able to offer us hope or protection, what do we do?

They say unusual problems require unusual solutions. They also say that if you cannot beat them, you join them. This is why I have decided to go down on my knees to beg our angry brothers on behalf of our leaders. I am begging for forgiveness on their behalf. When children are angry with their parents, they neither kill them nor burn the house. They will still remember that they are their blood.

Our leaders are like our parents. We know they have erred but is that why we should kill them or burn our house? NO!

We should not cut our nose to spite our face. That will not be a very bright idea. Since the unfortunate Civil War, Igbos have been marginalized. They have neither been allowed to serve their county at the highest level nor been blessed with the luxury of projects in their land. Those established earlier have all been allowed to die.

I remember as a kid seeing trains in Enugu leaving or coming in. today what we have are dilapidated rail tracks without trains.

Because of the total lack of federal presence in Alaigbo, people from other parts of the country do not invest here. In fact, most of what make the Southeast tick are from the sweat of the people of the zone who have largely taken to commerce to survive.

Not always blessed with good leaders until recently in some parts of the zone, there have been little or no serious infrastructure. But the little we have are going up in smoke because our angry brothers are destroying them. The business we are known for is also under threat because of the chaotic situation in the zone. Indeed, very soon the Southeast will lie fallow as no investor can take the risk of putting his money where it cannot yield profit. Is that what we want?

This is the time when we should be working hard to establish a solid economic bloc for the Southeast which will help us to forget Nigeria even while living within the country. We have already shown signs of what we can do. Any doubter should visit Nnewi, Onitsha and Aba to see the wonderful spirit of industry of our people. It was not Nigeria that did it for us. We did it by ourselves.

Painfully, however, what is happening today is nowhere near achieving that economic bloc. In fact, we are rather destroying the little gains made. That is why our anger is not serving us any good purpose. If we become homeless and refugees in our own land out of our own making, where do we run to? Who do we expect to take us in?

The federal government is not ready to help us rebuild what we destroyed by ourselves. Rather they will be laughing at our folly. Where then lies our sense?

But despite the fact that we have not covered ourselves in a lot of glory by our actions, I’m still on my knees begging on behalf of our leaders for forgiveness. The dead do not build houses, industries or offer employment. It is the living that do all these things. If our anger causes us to destroy everything and kill each other, who will live to put things right? If our land becomes ghost towns who will it benefit? Who will live in it?

Therefore, my brothers, let us simmer down and have a rethink. Let us allow bygones be bygones and seek more peaceful and mature ways of doing things. In a democracy, the best way to effect a change is by voting out bad leaders and replacing them with the ones we consider better.

Yes, in Nigeria; just as in many Third World countries, the people’s mandate is often disregarded. But it is in our hands to ensure that our votes count. If the anger we show today is directed at those who rig elections, who says they won’t take flight?

The long suffering masses of Nigeria showed during the EndSARS protests that they hold the real power. They can use same power to ensure that their votes count. So, instead of shouting no election, let’s rather shout and insist that our votes must count. Instead of going after innocent people, let’s warn election riggers that we are ready for them. We’ve already bared our fangs and many now know that we can bite.

If we must show anger, let’s direct it properly by trooping out to vote and defending our votes. But until that day, I once more beg that we sheathe our swords as iwe nwanne adighi eru n’okpukpu.