I Almost Threw a Party When I Saw Them

Last Thursday morning, I left for work as usual. As has become the norm in these days of high criminality in the state, I always look around me, mindful that my mobile phone could be snatched from the window by hoodlums.

My apprehension has been heightened by the near total absence of the police from the roads since the advent of the unknown gunmen who have been having the fun of their lives, killing security operatives.

The cult war ravaging Awka hasn’t helped matters either. So each time I drive to anywhere, I tend to observe movements behind me from the rear view mirror or ahead of me from the front windscreen.

As I passed Unizik Junction that Thursday morning without again seeing any police officer on the road, my mind raced back to what has become its favourite pastime: the anarchy that will sweep through the state in the event of the continual absence of the police. 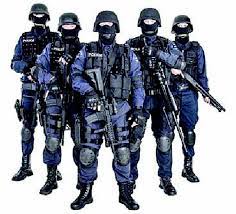 This thought always saddens me and I was thinking of the implications, as I always do, when I got to Aroma Junction. It was there that I finally saw them.

They were policemen but they looked different. Their uniform was a bit darker and they looked like soldiers primed to go into battle. As I got closer, I saw they were many and were stationed on both sides of the Aroma Flyover. There was even an armoured personnel carrier on the other side.

I suddenly felt like coming down to hail them and take pictures with them. It was a relief to see, not just policemen, but policemen that exuded confidence and looked battle ready.

Just the day before that, I learnt that a special squad of police had been deployed to the state at the behest of the state governor to complement the efforts of those here. I was sure as I watched them that I wasn’t the only one feeling ecstatic about their presence.

Oh yes, many have indeed begun to wonder when the police would regain the public space and when the government would wake up to its responsibilities. At a time it did seem all hope had evaporated as criminal elements rode rough shod over us. If you challenged anyone they would tell you that they would do as they liked as no policeman was around to wade in. Indeed, I recall the day a keke driver, who was shunting, blocked me at the traffic lights at Amawbia. As I was shouting at him, another keke driver told him to stay where he was as no policeman was on the road. It was that bad.

That was why I feared for what was sure to follow if things were left unchecked. We already got a glimpse of this during the EndSARS protests where the seed of today’s wahala was sown. It was the time the police were sacked from the public space but luckily, as the hoodlums began to hatch evil ideas, sanity, or what looked like it, returned.

Now we began to experience it all over again and that was quite worrisome to me. It was so because I dreaded when they would graduate to raiding entire streets, knowing they would meet with little or no challenge. In that kind of situation that we were getting into, it was apparent that only God was going to save us.

Thus you can imagine what it felt like for me seeing those stern looking cops last Thursday in Awka. One only hopes that they will not just look stern but act like that too. I also hope they will be stationed in other parts of the state.

Kudos to Gov Obiano for his efforts in getting the state back in the groove, security wise. For now, the presence of those tough looking guys is like a soothing balm to a lot of folks.

When the governors of the Western states launched their security outfit which they code named, Amotekun, we saw the men that would drive the outfit. They were well fitted out in their uniforms and armed. Their operational vehicles were also there for the world to see.

Even when Nnamdi Kanu, leader of the Indigenous People of Biafra, IPOB, formed his own security group, those that would drive it were there.

Before our governors in the Southeast formed theirs, we believed that it would be along the same lines if not better than those formed previously by others. But, alas, when it came, it was nothing but laughable.

They announced the formation of Ebubeagu as the outfit that would secure the zone but, lo and behold, no one saw anything resembling such an outfit. No vehicles, no weapons and no personnel. So why did the governors form the outfit in the first place? To me, Ebubeagu, which name is even contentious, is one big hoax. It was a failed attempt to copy what others had done.

ESN, Where Art Thou?

So much noise has been made about the Eastern Security Network of Nnamdi Kanu. The formation of this unit, we were made to understand, was to fight the killer Fulani herdsmen, who are slowly becoming an army of occupation in the east. But ever since ESN was formed, I’m yet to read any report about how many Fulani herdsmen they have captured or how many of their attacks have been repelled.

We have been reading about the Ebonyi massacres and the activities of the unknown gunmen across the Southeast states, as well as the deadly cult war in Anambra. One would have thought that our dear ESN would have got some of them by now.

But all we read or see are their video footages of bush operations where we are told that they are chasing the Fulanis away, even though no Fulani has been shown in those videos.

You see, while we blame our governors and the police for failing in their duties, we should also be asking questions of the ESN. Are they doing that for which they were set up? Can they stand the firepower of any invading force? We have always been told by their leaders that they are capable of confronting and defeating our common enemy.

I haven’t been able to see how they have defeated our enemy or even fighting them. Thus, we should not just be accusing our governors of failing to do the needful. We should also be laying the blame on the doorsteps of the ESN. For now, it is all a matter of ”dem say, dem say”.

Return of Garbage in Awka

Has anyone noticed the heaps of uncleared refuse in parts of the Awka capital city? From Gbalimgba Market area at Eke Awka to Zaramax Hotel Road in Awka, it is the same story of undisposed refuse heaps.

At the Zaramax area in Okpuno, the road is almost being completely blocked by refuse. One lane of the road had since been taken over by refuse.

So what is the matter? What has happened to the newly purchased trucks by the state government for clearing refuse? Are the workers being owed? Is the government not supporting ASWAMA enough? The situation is getting very bad and something has to be done pronto.

As for members of the public, we should learn to observe proper habits that will help to rid the streets and roads of dirt. Many people still dump refuse indiscriminately, while many also throw things out of vehicles to land on the road. None of this will do our aim to have a clean environment any good.

May be it will be a good idea for the state government to set up a monitoring unit to apprehend those who misbehave. If not, such behavior will continue to render the efforts of ASWAMA useless and that’s not ideal.

VIO and Nuisance on the Roads

If you a regular visitor to Awka or you regularly use the roads, you will not fail to notice men dressed in white tops at both sides of the Aroma Bridge. They are Vehicle Inspection Officers, VIO. These men are often accompanied by men of the Civil Defence who carry guns.

Their duty, it seems, is to check the road worthiness of vehicles. But in so doing, they add to the traffic situation in that area. Worse still, they often target private vehicles, rather than commercial ones, probably because the private vehicle owners will part with more money.

I say this because the general belief is that these men are there to generate revenue for the government, and not because they care for the safety of the people they stop. I’ve seen a Civil Defence official use the muzzle of his gun to smash the windscreen of a tipper; an action that could have resulted in something more serious had the gun gone off.

Shouldn’t these VIOs be doing their job any other way, rather than harassing people on the road and causing traffic jams? A stitch in time saves nine, we know. So the authorities concerned should devise safer and more civil ways of doing their job, lest they stretch the patience of the angry populace.