How the Civil War Shaped my Life – Fr Obiorah

…in this part two, he speaks about his life with the army, legal studies at Cornell and his chamber experiences, birth of Equity Law Chambers, among others.

That was the time ECOMOG was reigning in West Africa. So, all the priests that were supposed to be chaplains were taken out of the country. So, I was appointed Chaplain for both camps, coupled with my work as a parish priest at Our Lady of Assumption. 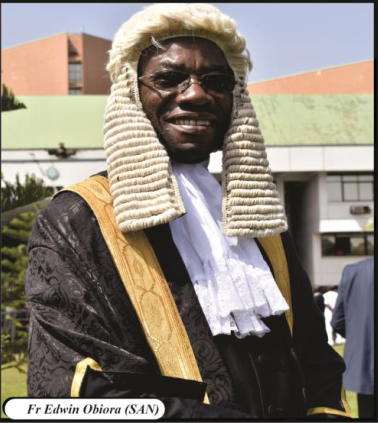 Then, I was admitted to study Masters in Law, LLM, at the University of Lagos. I was working and scored very high in all the courses I undertook. Then, the Bishop decided that I should go and specialize again. So, I got admission from several universities.

I got one from Harvard, one from Cornell, One from McGill in Canada, and one from the University of Pennsylvania. I had wanted to go to Harvard because it had a name but the admission came late. I got the one from Cornell first and Cornell is from Ivy League.

I was persuaded by a great politician and one of the fathers of this nation, Matthew Mbu, who encouraged me to go to Cornell. So, I went to Cornell. At that time, Cornell needed me to get a diploma in Law from the University of Sorbonne because the University of Sorbonne and Cornell worked hand in hand. It was part of their programme as international student. I, therefore, went to Sorbonne first, got a Diploma in International Law. And then went to Cornell where I studied.

Because at Cornell, you would not apply to do doctorate in Law directly, you could only apply to do Masters. The principle in Cornell was that every three years, they looked backwards and looked for one of their best students and then offered that individual to enter into what was called Doctor of Juridical Science, JSD. After my LLM, it appeared that they were so pleased with my performance that the Law School recommended me for the post graduate school for this degree programme and said that I needed to do the programme.

One of the incentives they gave was that they awarded me a tuition scholarship which was more than forty-five thousand dollars as of that time. So, I accepted it and began both my course work and research.

I was lucky to have one of the great brains in Legal Jurisprudence, Professor Robert, to be the chairman of my committee. Again, at Cornell, you needed to choose three main professors to be in your committee.

Doctorate of Law is not created by one person at Cornell. It must be a committee of professors, but you are given a free hand to choose people. The university can modify or can reject. We got three Professors of Law highly recognized internationally.

But when my project was approved, which was Eco Justice. In short, we chose the topic because we tried to form a new paradigm in jurisprudence. And to be awarded JSD, it was not enough that you completed a course work, it was not enough that you wrote something and brought.  You must have broken a ground in law. If you have not been able to break any ground in law, then you can remain there in the programme until you decide to go.

So, I was lucky I formulated this topic of Eco Justice. You will see it everywhere. People use it and would not know where it came from. And when they saw the ambience and the coverage of this topic, they said they would have to get a professor in Environmental Science to be in my committee.

So, I was now the only candidate to have four professors to be supervising and moderating his dissertation. But I was lucky, they were so brilliant. We were competing whether I could finish a chapter before they could finish their own dissertation. We were going chapter by chapter and they were working very hard.

Passing from one person to another and eventually, the work was done.  And the Law School informed the graduate school that I finished the programme in one year and three months and that was in November 1996. Of course, you should know that with Law School, the minimum year for that programme is three years. And for you to come out and say you have done what should be done in a minimum of three years in one year plus some months was unheard of in the milieu of scholars in Cornell.

But the Law School was fighting the cause, they said that to keep this young man here just to mark the time was to waste the contribution that he would make to society, according to them. And the two elephants began to fight. I was simply there and nothing to say. Eventually the Law School won. I was then given a clear field to defend the dissertation. A copy of it is in the library in this office.

That dissertation was published in the Library of the Congress, because of the novel issue that it brought and it is sold by them. I signed off the copyright to them. Now I was lucky again, I have always been lucky. During the defence, the entire university, almost all the scholars in the university, were there for my defence because they could not understand this man from Africa defending this at this stage with all the stories they heard.

Now you might be interested to know that at that time where I was doing the research and teaching, I was awarded a Fellow in Cornell in African Development. As I said, Cornell is one of the Ivy Leagues in the US and is well known in the area of Law and area of Aero Engineering and Space Studies. So, in a nut shell, that is my humble contribution.

One day after the defence, one of the great scholars who was in charge of International Law at Cornell called me to his office and we were discussing. I said, ‘Thank you for the award of PhD,’ he said, ‘No, doctor Obiorah, you do not have a PhD. If you want to say you have a PhD you go back to JD. What you have is JSD (Juridicae Scientiae Doctor), Doctor of Juridical Science. That was to make me feel so proud but unfortunately, he was talking to a priest whose calling is humility.

Where did you start your profession as a lawyer?

I was privileged. My life is full of privileges. There was a great man called Chief Nwazojie, SAN. He was a Director of Public Prosecution, DPP, of the federation and eventually retired and began private practice. So, he became a Senior Advocate. He had a law office of Nwazojie and Associates.

Immediately after my graduation and my call to the bar, he took me into his law office. So, I worked under him and he was really a great teacher and inspiring. I am so unhappy that he died before today. He would have been so happy that what he fashioned has come to fruition. He exposed me to great development in practice.

At that time, 1990 census had just been concluded. The Attorney General at that time was Akpamgbo, SAN. He called Nwazojie to defend the federal government, and Nwazojie took us and gave us the file.

All the lawyers that I had name at that time had their own constituency they were representing (like Rotimi Williams), challenging the authenticity of the census, while we were defending the census and the federal government. Eventually in the course of this case, Nwazojie became sick, so the bulk of the work fell on us and we were two, Ezekwueche from Abagana and I. The census was then not nullified because of the hard work we put into it.

To go to his office, you must have gone through several channels and at that time I know very senior lawyers who would visit his office to get cases, to be given briefs. But this man saw me and called me and said:  can you do some cases for me?  My head was almost swollen. It was from the blues to mention that. I don’t know how many times I said ‘yes’ that day.

So, he gave me his card. That card was the key. Once you show the card, the doors are open. So, that day of appointment, I went and I saw him. His office is like a football field. I entered, he had already prepared six file briefs. He handed them over to me.  I was able to conclude four and transferred two to my friend, Ezekwueche. We were lucky again, because in all these briefs, NNPC won.

We were so lucky. In law you can never say you win all your cases. Law profession is like medical profession, the doctor cannot guarantee that the patient will survive. Similarly, in law, what you owe a client is the best of your ability, every other thing is left for the judge.

It is from there, I proceeded to Paris and then to US.  Then in US, of course I had parish experiences, after I taught a while, a large law firm of Harris Beach and Wilcox now they have changed the name to Harris Beach alone, they removed Wilcox. They invited me to work with their firm.

At that time, their firm had two hundred and fifty lawyers.  I was thrilled because to be invited to that kind of law firm was not easy. I worked there, and they made me in charge of international litigation . I did case in Germany and France sitting in my desk in New York. Most of the things were done virtually.  They were pleased with my work and I was the only black man in their midst working at that time.

From there because of the need to help some of the poor immigrants around and I also specialized in migration law, I applied to start my own law firm. They obliged me, so I began a law firm of Edwin S.C. Obiorah and Co. in new York. I was a legal adviser to the Catholic Diocese Rochester in immigration and we were doing so much. Eventually, there was an opening the justice office and the Mayor of  Rochester found favour in me and wanted me to take over.

He went through a lot to get me to take over the place as judge but I had to get my permission from the bishop. The bishop of Rochester was my bishop then,  in situ. He declined and said no, that the priest has never been a judge. I wrote to my home bishop, Bishop Simon Okafor. He said that since the bishop of Rochester had already made that decision I should abide by it.

Within a short time after this opinion, Bishop Simon Okafor called me and said I must come home. So, I left everything and came home. He said I should begin a law practice. That was how equity law office was born in the year 2004. The appellation, Equity Law Office was actually formulated by Bishop Simon Okafor. So, we began that law office. It is structured in the form of the US law office, where you have directors. So, I happen to be the director in that office, and we have been practicing ever since.