The lingering confusion as to who is the authentic traditional ruler of Awka Town has been laid to rest, with the Anambra State governor, Prof Chukwuma Soludo, banning the self-styled king of Awka, Chief Austin Ndigwe, from parading himself as the monarch, just as the government affirmed its recognition of Obi Gibson Nwosu as the recognized traditional ruler of Awka, report Jude Atupulazi and Ikeugonna Eleke.

For the better part of the previous regime of Chief Willie Obiano, Ndigwe had been laying claim to the kingship of Awka Ancient Kingdom, without the government stopping him. This development had led to confusion and discord in the kingdom as Ndigwe often attended some functions within and outside the state as the traditional ruler of Awka. This was despite many petitions by the Obi Gibson Nwosu to the government to stop the anomaly.

But on Saturday, September 10, justice was finally served as the Anambra State Government under the new governor, Prof Chukwuma Soludo, stopped Ndigwe from performing the Iwa Ji ceremony which Ndigwe had planned, posing as the traditional ruler of Awka. The government also banned Ndigwe from further parading himself as the monarch, threatening legal action against him; just as it affirmed that Obi Gibson Nwosu remained the only recognized monarch of Awka Kingdom.

This affirmation was contained in a press release by the State Commissioner for Information, Mr Paul Nwosu.

That Saturday morning, there had been a commotion in Awka when a detachment of the police and military sealed the palace of Ndigwe who was billed to celebrate the New Yam Festival as the monarch of the town.

The security operatives chased away guests and also shot canisters of teargas into the crowd, causing the guests to scamper for safety, with some of them injured. 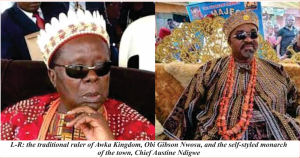 The release read in part: “It has come to the attention of the Anambra State Government that one Augustine Ndigwe, Alias Uzu Awka, is parading himself as the authentic traditional ruler of Awka.

“Not only that, he is also taking steps to perform one of the major harvest season’s traditional rite known as New Yam Festival; thereby threatening the peace and tranquility of the town. The state government will not tolerate this.

“For the avoidance of doubt, the state government wishes to state emphatically that the only recognised traditional ruler is His Royal Highness, Obi Gibson Nwosu, Eze Uzu II, whose recognition by the state government has not been withdrawn and is the only one empowered by section 15 of the Traditional Rulers’ Law of Anambra State to preside over such a festival or carry out the functions of a traditional ruler in Awka.

“It is a criminal offence for any other person to do so by virtue of Section 20 of the Traditional Rulers’ Law of Anambra State, 2007”.

Reacting to the development in a chat with Fides in his palace, Monday, the traditional ruler of Awka, Obi Gigbson Nwosu, commended the Soludo Administration for stopping those he described as trying to bring bad things to Awka and for restoring peace in the kingdom.

The monarch also used the opportunity to clear the air on his alleged stopping of a traditional ceremony called Otite Festival. Explaining that he never stopped it, the monarch the community was in mourning owing to the deaths of many prominent people inclusing the town’s president general, Chief Tony Okechukwu; erstwhile Biafran Army Commander, Major Gen Alexander Madiebo; Engr Emma Nweke and Hon Nnamdi Okafor, as well as the traditional ruler of neighbouring Amawbia Town.

‘There’s no community you visit today that you will not see prominent people either sick or having died,’ Igwe Nwosu said, noting that it was good to honour them; even as he thanked Soludo for his intervention, which, he said, had restored peace to Awka Kingdom.

Fides however reports that the self-styled monarch, Chief Ndigwe, had in his reaction to his ban, accused the state government of taking the action because it felt he did not support them in the last election. He reportedly vowed that no one could stop him from parading himself as the monarch of the town.

Meanwhile, in a move to further drive home its resolve to bring sanity to communities in Anambra State, the Anambra State Government has also again barred one Chief Emeka Anagor from parading himself as the president general of Awka Development Union.

Fides gathered that Anagor has been working hand in hand with the now outlawed monarch, Ndigwe, even without a certificate of recognition from the government as the president general.

Anagor had signed the message inviting guests to that Saturday’s botched New Yam Festival that was billed to be celebrated by Ndigwe.

In a press release by the Anambra State Government through the Ministry of Local Government and Chieftaincy Affairs, which was signed by the commissioner, Hon Tony Collins Nwabunwanne, Anagor was warned to stop parading himself as the President General of Awka Development Union (ADU).

The letter clarified that the only recognised president general of Awka Development Union was Barr Kanayo Nwogbo.

It stated that Awka Community held its elections which were monitored by government agents where Nwogbo emerged in 2020, and that he therefore remained the only recognised president general of the community.

In a related development, the Anambra State Police Command said it arrested six persons who attacked operatives of the command at the palace of Augustine Ndigwe, the now proscribed monarch of Awka.

In a press release, the spokesperson of the Command, DSP Tochukwu Ikenga said the deployment of police operatives that Saturday to the residence of Ndigwe in Awka, was to ensure there was no breakdown of law and order in Awka Community.

He disclosed that one Mr Nwokoye, who, he said, led the attack on police officers, was in custody with five others and that the suspects had been transferred to the State Criminal Investigations Department for investigations.

It is believed that Governor Soludo’s firm stand will put paid to the activities of many illegal monarchs in most Anambra communities who are operating without certificates and stoking the fire of violence and disunity.