How I Met My Wife – Maduka

On Saturday, February 13, youth activist and former National Youth Council of Nigeria, Anambra Chapter Leader, Comrade Frank Maduka, walked down the aisle with his heartthrob, former Miss Chioma Okoye, daughter of the Anglican Bishop of Ihiala, Most Rev Prof Israel Okoye, at Church of the Pentecost, Awka, a wedding attended by the high and mighty, including the Arch Bishop and Metropolitan Primate of all Nigeria, His Grace, the Most Rev Henry Ndukuba, who wedded the couple.

But the journey to the altar for the couple began at the bride’s office where the groom, with the permission the bride’s boss, was allowed to pose as a client just to be able to see and assess the bride from close quarters at her law chambers. 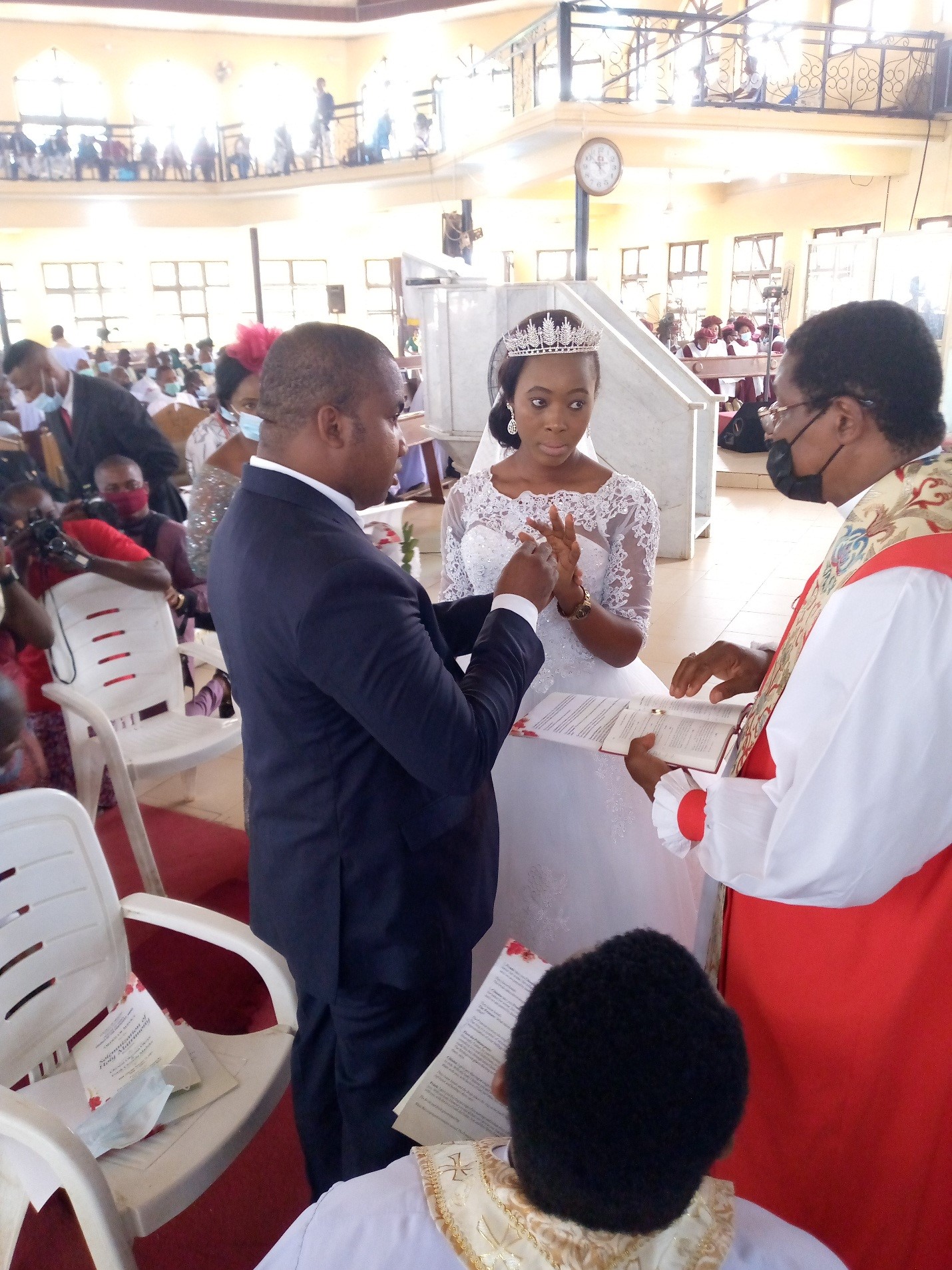 Mr and Mrs Maduka being wedded by the Arch Bishop and Metropolitan Primate of all Nigeria, His Grace, the Most Rev Henry Ndukuba, at Church of the Pentecost, Awka, Feb 13, 2021.

Then, Miss Okoye had been recommended to Maduka by the wife of the retired Bishop Maxwell Anikwenwa of the Province of the Niger.

Taking up the recommendation, Maduka sought for an opportunity to see Chioma. He first called his friend, Mr Chidi Nwakpadolu, who, according to Maduka, confirmed how wonderful Chioma was.

‘Chidi advised that I come to their church where she serves as a warden to see her. But the day I went I couldn’t see her,’ Maduka recalled.

He then decided to go to the law Chambers where she practiced, with the permission of her boss who suggested that he should pretend to be a client.

Maduka continued, ‘The manner she received me and her honesty, plus charms, now propelled me to ask for her number and the rest is history.’

And so, on Saturday, February 13, that history was completed when the couple tied the nuptial knots at Church of Pentecost, Awka.

Delivering the sermon at the wedding service, the Bishop of Awka Anglican Diocese, Most Rev Alex Ibezim, described the marriage as a special one which was preceded by a special training for the couple.

He expressed optimism that because of the backgrounds of the couple and their families, the marriage would succeed and be a role model for other marriages.

Bishop Ibezim who described the parents of the couple as disciplinarians, reminded the congregation that marriage was ordained, not by man, but by God, hence the proclamation that no man should put it asunder; even as he recalled God’s statement that it was not good for man to be alone.

He explained that in marriage, the man must be the head and not the other way round, and that women must submit in everything in marriage, lest it amounted to disobedience.

The bishop said it was falsehood for any woman to claim equality at home with the man, even as he reminded men that as leaders of the home, they were also pastors there and should lead in prayers and prepare their wives, families, for rapture.

While acknowledging that problems were part of every marriage, he said problem solving was essential in marriage, and noted that such helped to strengthen marriage.

One of the guests who spoke to journalists, Mr Valentine Ozigbo, described the marriage as a sacred and divine union ordained by God and a source of joyful passion.

Ozigbo, who is the immediate past President and Group CEO of Transcorp Plc, also wished the couple a fruitful and blissful union and described the groom as his friend.

‘Frank is someone I can confide in when it comes to my KaAnambraChawapu project. He is a youth leader, and I am thrilled that he is finally settling down,’ Ozigbo, who is a gubernatorial candidate on the platform of the People’s Democratic Party, PDP, said.