How I killed the Boredom of Football Off Season

You will not understand the excitement of football buffs about the start of the new football season in Europe, if football means nothing to you. It is even possible that you will look upon those of us cheering the beginning of the European football season as those whose brains may need resetting.

But then, if you ever had a passion for anything, it wouldn’t be difficult for you to appreciate how we feel. Indeed, after two months of boredom occasioned by European soccer inactivity, many of us can now heave a sigh of relief and shout hurray, following the start of soccer hostilities in parts of Europe this weekend.

Even before the last season ended May 29, I had begun to worry and wonder how I was going to survive the coming two months of boredom. This is a feeling that amounts to frustration, especially when there is no football of any kind during the break. In normal world cup years, or European Championship periods, one usually takes solace in the fact that one will occupy oneself by watching games in those competitions. But there was nothing to look forward to after the end of last season. 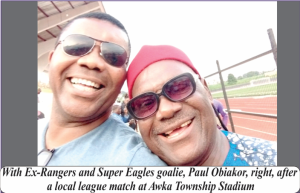 What do I normally do during such dry periods? I usually buy novels to keep me busy, even though nothing can take the place of the real thing. So, within the period of inactivity after the last soccer season, I did just that: buying and reading my favourite novel which is James Hadley Chase.

It is a brand I started reading when I was in Primary five and this presupposes that I would virtually have read all the titles. Yes, I have read almost all; except maybe two or three that have always been scarce to find.

Reading almost all of them also could mean that I would be repeating those I have read. But while that is the case, I am fortunate that I usually forget most of them, especially those I read long, long ago. Thus, you may be surprised that I will read some of those titles three times and still not remember what happened in them; at least not fully.

But even though I made do with those novels during the soccer break, my whole being still yearned for the real stuff which is football; any kind of football, even. That was how I came to watch Rangers International FC of Enugu play for the first time since 1987. Yes, I watched them for the first time after 35 years! And I did so because of the yearning to satisfy my craving for football action in the off season.

I still remember that last time I watched them play against Iwuanyanwu Nationale of Owerri at Nnamdi Azikiwe Stadium, Enugu. The match had ended 2-1 in Rangers’ favour, with Ikechukwu Ofoje scoring the winner. It was when the stadiums used to be packed to the rafters by spectators. That day, I had to stand to watch because every available seat had been taken. 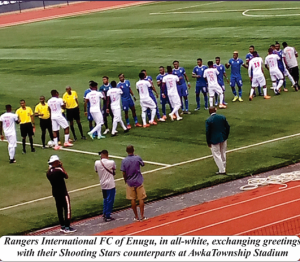 Today, however, the joy of the local game is gone, such that very few bother to watch it. But because of the boredom suffered by many football lovers, the Awka Township Stadium which served as the venue of Rangers’ home games last season was filled, just like the old times.

In fact, in the last league match of the local football season between Rangers and Akwa United, those who came late had to stand, including a former chairman of Awka South Local Government, Jakpo, until someone who recognized him offered him his own seat. The stadium may not be the biggest but still, it would not have been filled if the European season was on.

I must however say that I enjoyed watching Rangers. They were such a good team with talented and skilful players and it was such a wonder that they could only finish sixth.

Their opponents were equally good and I regretted not watching their matches earlier, as I only watched three home games they played against the eventual winners, Rivers United; old foes, Shooting Stars; and Akwa United; and that was the end of the local football season.

Nevertheless, going to Awka Township Stadium to watch those games afforded me the opportunity of meeting with some old players of Rangers who are my friends, such as Paul Obiakor (former Goalie) and Arthur Ebunam, a tantalizing midfielder. Both also played for Super Eagles.

I also co-handled the microphone at the commentary box in the game between Rangers and Shooting Stars with my colleague, Iyke. It was a day I relieved the rivalry between the Old Rangers and Old Shooting Stars, then known as IICC Shooting Stars. I nostalgically recalled the exploits of Shooting Stars’ former players like Segun Odegbami, Kunle Awesu, Idowu Otubusen (Slow Poison), Joe Appiah and Tunde Bamidele, among other greats.

Oh, those were the days! It was an era when local football was pure delight to watch. Those were the days of Mighty Jets of Jos; Bendel Insurance of Benin; Alyufsalaam Rocks of Ilorin; ACB of Lagos; Raccah Rovers of Kano; Stationery Stores of Lagos and P&T Vasco Da Gama of Enugu.

Those were the days Nigerians loved the local game and would stay glued to their radio sets as the likes of legendary Ernest Okonkwo, Sebastian Ofurum and Diewait Ikpechukwu ran live commentaries of football matches. Those commentaries were electric and it was such that even when people watched the matches on TV they would turn off the TV volume to listen to the radio commentaries.

But, alas, poor administration gradually took the shine off Nigerian football just as interest in foreign leagues started gaining ground. It can be said that the stoppage of live radio commentaries and TV coverages killed interest in the local game.

Eventually, the foreign leagues overwhelmed both the local football and the fans, such that today, some people will prefer to watch their favourite European clubs over the Super Eagles should the time of their matches clash. And with the continued ineptitude of the local football administrators this trend is likely to continue. That our Super Eagles missed the world cup is an added blow that will further diminish interest in the local game.

And now, the European football is back and I feel sorry for the local clubs. It is not their fault that many will prefer to watch foreign clubs. Bad management and corruption have conspired to deeply hurt our local football, barely shying away from killing it.

Indeed, it seems that even the state governments which largely sponsor many clubs on the local scene have no time to care for the players any more. When I saw the buses conveying Rangers, Shooting Stars and Akwa United to match venues, I shuddered when I compared them to the Marco Polo buses European teams are conveyed in to match venues. In fact, when I saw the Shooting Stars bus, I thought it was a miracle that the players were able to be getting to their match venues across the country. With such developments, is it any wonder that the local game is at an all time low?

Except for clubs like Rivers United and Kano Pillars, and perhaps, Enyimba, which pay players well, the rest of the clubs are just going through the motions of existing. I really do feel sorry for the local players and I can understand why their dream is to play for foreign clubs. When will the local football return to the good old days? I don’t honestly know. With poor stadia and poor pitches, coupled with poor administration and corruption, how can it grow?

Yet, the local game gave me and other football buffs, a reprieve during the off season and I will be looking forward to returning to it any time I have the opportunity.