How Effective is Anambra’s Ban on Open Grazing?

Last Monday night, a ghastly accident was recorded along the Timber Market stretch of the Awka/Onitsha Expressway between a driver of a private vehicle and a cow which resulted in the death of the cow, while the fate of the driver remained unknown as at the time of this editorial. This is not the first time such an accident has been recorded between cattle and road users. Indeed, some of those accidents often result in the death of the drivers also. 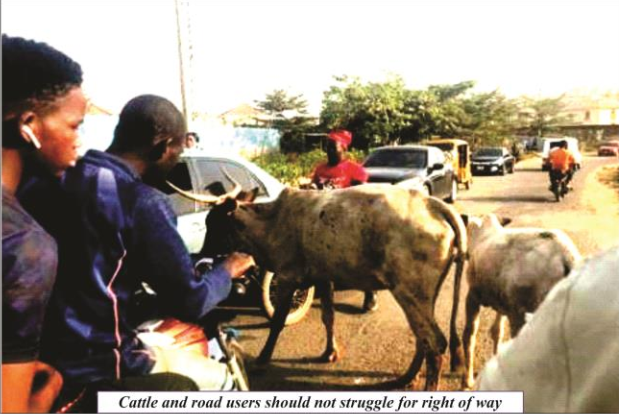 We are particularly concerned about the incidences of such as Anambra State, then under Gov Willie Obiano, had last year signed into law, the bill banning open grazing of cattle and other livestock across the state.

Obiano had then explained that the state government took the decision to ban the open grazing of cattle and other livestock in order to promote peace between the farmers and herders in Anambra State; even as he expressed the hope that it would offer a permanent solution to the farmer/herder crises then being experienced in parts of the state.

He also announced that law enforcement agencies had been directed to immediately commence the implementation of the law.

Sadly, barely a year since the signing of that bill into law, nothing, absolutely, has changed. Herders still openly lead their cattle to graze in community lands and township streets. Worse of all, they still take their cattle to Onitsha through land every night, thus endangering the lives of road users, a development that led to the accident recorded last Monday night.

Of what use then was the ban on open grazing by the Anambra State government if the government had no intention of effecting and monitoring the ban? Was the ban announced because the then Anambra State Government wanted to fulfil all righteousness as it were? It is such failure to follow up government actions that makes the citizenry to treat some government’s directives with disdain.

This is why we are now calling on the new government of Prof Chukwuma Soludo to have another look at this ban and come up with lasting measures to ensure that the ban is carried out to the letter.

Allowing cattle herders to still roam with their cattle in farmlands and communities is one sure way of triggering another round of confrontation between communities and herders which the law prohibiting open grazing had sought to eliminate in the first place.

Cattle should no more be seen on the roads, streets or farms after the ban. We urge the new administration in the state to urgently address this anomaly.

Cattle and road users should not be struggling for right of way anywhere in Anambra State.