The 55th World Communications Day with the theme, “Come and See (John 1:46): Encountering People where and as They Are”, has come and gone. However, the experiences in different dioceses were not the same. Fides provides an insight into how each of the three dioceses in Anambra State: Awka, Nnewi and Ekwulobia Dioceses, marked the celebration.

In Awka Diocese, the Social Communications Directorate, headed by Rev. Fr Dr Martin Anusi, organized a series of events over the last weekend and rounded off on D-day, Sunday, May 16, 2021, with a virtual conference that brought together practitioners from at least five dioceses spread across the northern and southern parts of Nigeria.

Fides recalls that Fr Anusi, in a monthly meeting of the News and Editorial Department of the Directorate, Wednesday, May 12, at Archbishop A. K. Obiefuna Auditorium, Fides Media Complex, had challenged reporters to advance ideas that would engender a different way of celebration, especially as it was planned to be virtual, owing to COVID-19 health and safety regulations. 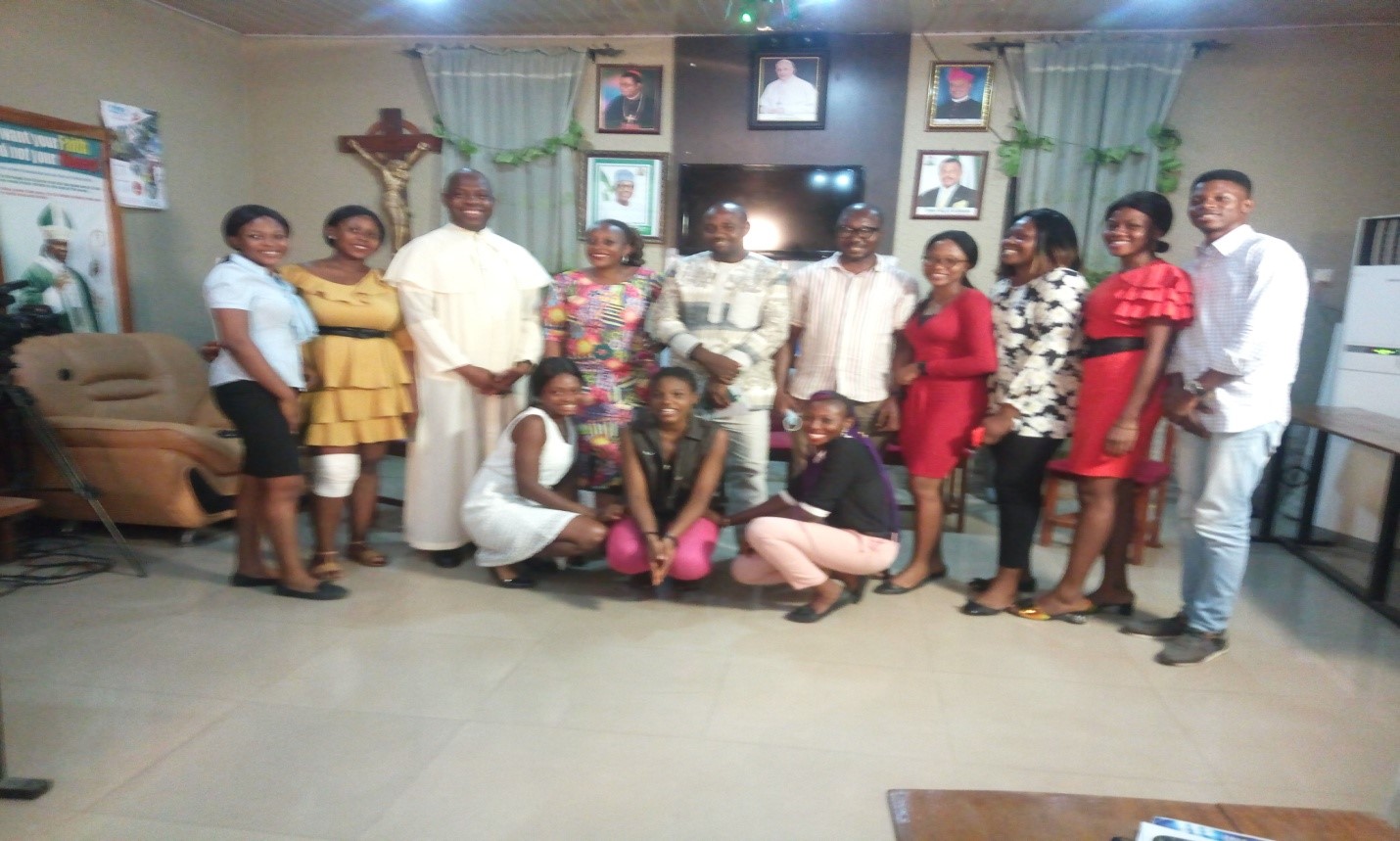 Participants at the Panel Session, Fides, Saturday, May 15.

Following this, the Directorate fused the celebration into one of its online programmes which is held weekly, Weekend Gist with Fides Media, at Fides Media Studio. This preceded another Facebook live panel session which provided a platform for practitioners, academics and students, to interact and reflect on the message of His Holiness, Pope Francis, for the celebration this year.

It was rounded off with a virtual meeting which held on Zoom, a video conferencing platform, where Dr Henry Duru of the Mass Communication Department, Nnamdi Azikiwe University, Awka, was the keynote speaker, and Fr Anusi was moderator. This was after a Holy Mass was held at St Patrick’s Cathedral, Awka, marking the World Communications Day.

When the Social Communications Directorate of Ekwulobia Diocese was contacted, Monday afternoon, its Director and former Director, Fides Media, Very Rev. Msgr Jerome Madueke, said they had a low-key celebration.

Msgr Madueke told Fides that it was observed by different parishes in the diocese, as the Directorate decided not to converge for the celebration. He added that they wanted to have structures in place before setting out for such a celebration, noting that they would observe it in a resounding way next year, 2022.

At Nnewi Diocese, the Director of the Social Communications Department, Rev. Fr Martin Onwudiwe, and members of staff of the Directorate, were at the Divine Mercy Orphanage and Less Privileged Community Children’s Home, Nnewi, where they celebrated Mass with the inmates.

Fr Onwudiwe, while speaking with Fides over the telephone, noted that taking up from the theme of the Pope’s message, they decided to go and encounter the less privileged where and as they were.

‘So, we began with a Holy Mass and the entire staff of the Catholic Communication was around. And after the Holy Mass, with the children and sisters taking care of them, we were able to celebrate with them,’ Fr Onwudiwe narrated.

The Directorate after the Mass presented the children in the home some items, including cartons of noodles, cartons of biscuits, packets of detergents and toilet rolls, among other items.

The Nnewi Social Communications Director said they had group photographs and went for lunch with the children and their caregivers on the sponsorship of the Directorate.

Fr Onwudiwe said also that the homily during the Mass was based on the theme of the year’s celebration, and, according to him, they made it a small gathering owing to the prevalence of COVID-19 protocols and regulations that were still in vogue.

He said all they did was in a bid to live out the theme and also eschew armchair journalism.

Meanwhile, Most Rev. Paulinus Ezeokafor (Awka) and Most Rev. Peter Okpaleke (Ekwuloba) respectively, titled their messages, “Communicating to Educate Positively”,and “Onye B[a Mmadx Nso, Qnx Isi Eze Ya” (It is only by coming close to people that we can know them well).

The message of Most Rev Hilary Okeke, Bishop of Nnewi Diocese, could not be accessed as at the time of filing this report.